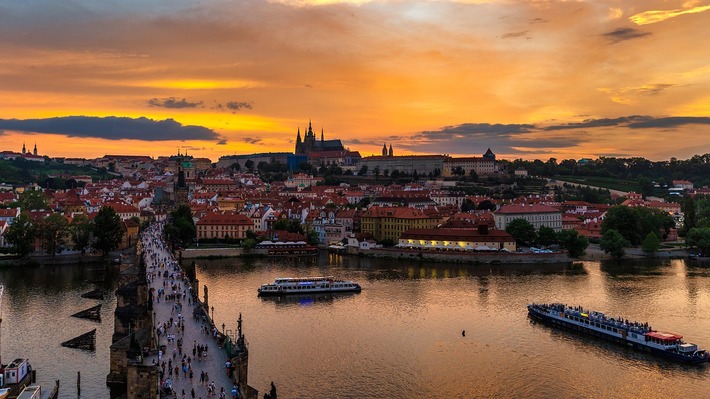 Prague has been nicknamed the "City of a Thousand Spires." As you glance over its 1,100-year-old skyline you'll be rewarded with countless splendid views of lovely domed churches and soaring old towers that combine to make Prague one of Europe's architectural gems. Everywhere you look, fine examples of Gothic, Baroque, Renaissance, and Art Nouveau styles dot the city, providing a dramatic contrast to the sturdy, ancient Prague Castle. Possessing one of the best-preserved historic city centers in Europe, Prague's narrow streets open up onto spectacular squares, each home to fine old homes and historical buildings just waiting to be explored. Must-sees include the famous Charles Bridge over the Vltava (Moldau) River; the splendid Jewish Quarter with its old synagogues; and the many historic churches. As one of the largest cities in Europe, Prague continues to be an important political, cultural, and commercial center, roles it has played for centuries as the former capital of the Holy Roman Empire. Today, this important UNESCO World Heritage Site serves as a major tourist draw, luring visitors from far and wide for its lively entertainment as well as its rich theatrical and music scenes. Here are 20 spots not to miss when you visit: