A Spin at the Whirling Dervishes Festival in Konya, Turkey Three images are especially iconic when it comes to Turkey: the Blue Mosque of Istanbul, the library at Ephesus, and the whirling dervishes of Konya. But despite all the time I’ve spent in this country, until I visited the dervishes’ annual festival last December, I didn’t truly know what they were all about. “Konya offers a unique opportunity to learn about the Sufi philosophy and the significance of the dance in the place where it all originated,” my Turkish friend Mehmet told me. And so off we went.

At the heart of the Anatolian plateau, Konya is one of Turkey’s oldest, most traditional cities, and its 1½ million population increases dramatically during the Sufi festival (scheduled this year for December 10-17). Some visitors fly in from Ankara or Istanbul, but we were in Didim, on the Aegean coast, so we went by bus. In Turkey long-distance motorcoaches (our trip took ten hours) often afford a level of service and comfort that might astonish some.

The Joy of Sufism

It’s bitter cold in December in Anatolia, but that didn’t seem to affect the cheerful crowd milling around Konya’s central bus station. The festive mood somewhat surprised me, since this is a religious event. But Mehmet reminded me that Sufism and the whirling dervishes are about joy, love, and becoming one with God. Gloom, doom, or even excessive solemnity have no place here. We stayed with friends, although there are hotels in Konya. The most convenient, though a bit pricey at €120 ,* is the historic 51-room Hotel Balikçilar, opposite the Mevlana Mausoleum(left), known for its green tower (unfortunately, the hotel’s already fully booked for this year’s festival; you can find others at sites such as KonyaHotels.com); . It’s here the man who started all this is interred.

Dervish as Doorway to Divine

Persian philosopher, mystic, and poet Jalal ad-Din Muhammed Rumi, whose followers and son founded the Sufi order, was born in 1207 in Afghanistan and came to Konya in 1228. Mevlana, as he’s called, taught a version of Islam that emphasizes tolerance, patience, and attaining happiness through love, and the unification with God through constant movement that reflects the movement of the earth and the universe. The word “dervish” means “doorway to God,” and the dance, called sema, symbolizes a mystical journey of the soul and mind from which the dancer emerges as a better person. Mevlana died Dec. 17, 1273, and it’s this anniversary that his followers celebrate at the festival.

We squeezed our way into the large hall in the mausoleum, a richly decorated chamber with chandeliers, Arabic script on the walls, and lots of gold. Folding chairs for spectators surrounded the space where the dervishes would appear.

The lights dimmed, and a hush fell over the audience. First out from a side door were the musicians. Dressed in black, playing a reed flute, a drum, and a one-string violin they began ritual melodies that are somewhat dissonant and monotonous, yet hypnotizing in their intensity. Then the dervishes appeared in single file, wearing white skirts covered with black cloaks and black, conical hats that symbolize tomb stones.

The first part of the sema is a dance in praise of Mohammed. The entire ritual has four parts, and after bowing to each other, the dervishes begin their spiritual journey by starting to spin. They turn in ever-increasing speed, always from right to left. Their arms, which at first are folded over their chests, stretch out, the right hand pointing heavenwards and the left towards the earth in a symbolic gesture to guide enlightenment from God towards us earthbound mortals. During the entire three-hour performance, nothing but the soft tapping of ever-faster spinning feet, the swish of billowing skirts, and the mesmerizing instruments waft through the mausoleum. 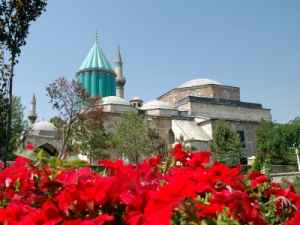 It takes education and training to become a dervish, something I learned very quickly when, back in our friends’ home, I tried a few twirls of my own and – after a handful of steps – toppled over. But there’s more to do in Konya, the capital of the Selçuk Empire from 1097 to 1243, than spin in your room. You can admire  Turkish craftsmanship at the Ethnological Museum and classical Ottoman architecture at the Selimiye Mosque (right).

Then there’s the shopping. I like the wall plaques of dervishes with Arabic inscriptions. They start at about 45 Turkish lira (around US$30) depending on the plaque’s size and quality – and your skill at haggling. Or you can enjoy mezes, Konya kebab (slow-roasted mutton), Turkish coffee, and baklava in the traditional restaurants called meyhanes.

If you’re sitting by yourself, you’ll find your mind drifting back to the sema. Even more than the dances presented at Sirkeci Gare, the railroad station in Istanbul, the Konya experience is an immersive one. Unlike all too many staged performances, this is the real thing, and it will stay with you long after you return home.

*For equivalents in other currencies, see Tripatini’s Currency Desk.