Spain off the Beaten Path: Albacete in Castile-La Mancha

There are of course enough varied destinations within this incredibly diverse country to keep visitors coming back repeatedly. And part of the pleasure of getting to know Spain in depth is going beyond the usual "greatest hits" and striking out off the beaten track. In that spirit, this blog has covered destinations like Ciudad Real, Guadalajara, Soria, and Zamora. And today I'd like to introduce you to another ancient, under-the-radar gem of which you may not have heard: the city and surrounding province of Albacete. It's a place that doesn't get a lot of attention or even respect from other Spaniards as a travel destination - reflected by a well known saying, "Albacete, caga y véte" ("have a poo and get out"). But this is pretty unfair, as the capital and especially the province have quite a bit to offer, have a read and you'll see what I mean.

The economic and judicial capital of the autonomous community of Castile-La Mancha like (which is also home to Ciudad Real and Guadalajara, as well as much better known Cuenca, Toledo, and the Don Quixote windmills of La Mancha), Albacete city is set in a landscape in south central Spain mixing the plains of the Meseta Central (in fact, its name comes from the Arabic Al-Basit, "the plain", from the days when the Moors ruled this region) with wooded mountains in the northeast, crossed in the northeast by the Júcar River, known for its deep gorges and forests. 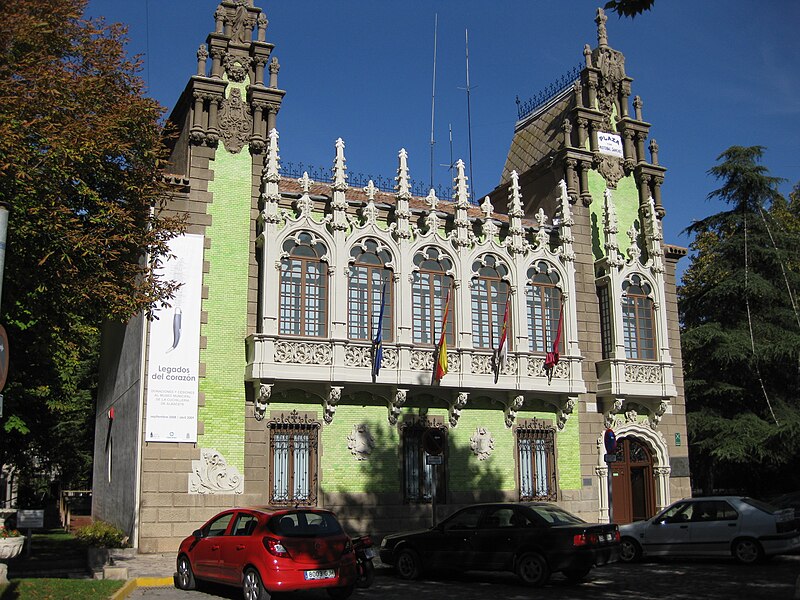 Unsurprisingly, the best place to start exploring is the eponymous capital, about 90 minutes from Madrid by train and a bit over 2½ by road. Though these days it's a largely modern city, strolling its downtown high street Calle Ancha and surrounding streets you'll still come across a good bit of striking 19th- and early-20th-century architecture, such as the handsome, late-19th-century Casa Cortés, once the city hall. There are especially several notable Art Nouveau buildings, like the soaring, 95-year-old Pasaje Lodares shopping arcade (top) and Casa de Hortelano (above after a 1912 makeover of an existing mansion, and incorporating neo-Gothic elements), since 2004 home to the, er, cutting-edge Museum of Cutlery.

But you'll also see a number of striking older landmarks, like the 16th-century Casa de los Picos, with its jutting, diamond-patterned Renaissance façade, and the Posada del Rosario, a typical La Mancha manse now housing the city tourism office and mixing Gothic, Renaissance, and Mudéjar (the post-15th-century style influenced by that which was prevalent during the 700 previous years of Muslim rule over most of the Iberian Peninsula). And of course there's the Cathedral of San Juan Bautista, which though begun in 1515 wasn't finished till a whopping 434 years later, ending up with an austere neo-Romanesque and neo-Gothic façade.

When it comes to museums, besides taking a stab at the cutlery you might also find the provincial Albacete Museum in Abelardo Sánchez Park interesting as a catch-all of archaeology back to prehistory (including a noted collection of ancient Roman ivory); fine arts (especially strong in 20th-century works). You might also head to the aforementioned Casa Cortés, on downtown's iconic Plaza de Altozano, for a look at the expositions hosted by the Municipal Museum, as well as the Museum of World Folk Art. On a greener note, the 18-year-old Botanical Garden of Castile-La Mancha in an outlying southeastern neighbourhood is petite (seven hectares/17 acres) but charming.

Beyond history and culture, this city also sports a lively free tapas as well as signature scene of la marcha (nightlife), especially in districts like downtown's La Zona, with its mostly pestrian streets like Calle Tejares; El Campus, in the south of the city near the university; and Los Titis in the northeast with its extensive sidewalk cafés. And speaking of partying, the biggest fiesta of the year, the Feria de Albacete (above), takes place in early to mid-September with ten days of processions; concerts; folk dancing; a fair with rides and plenty of eating, drinking, and activities - all mostly centred in and around the circular 18th-century fairgrounds. 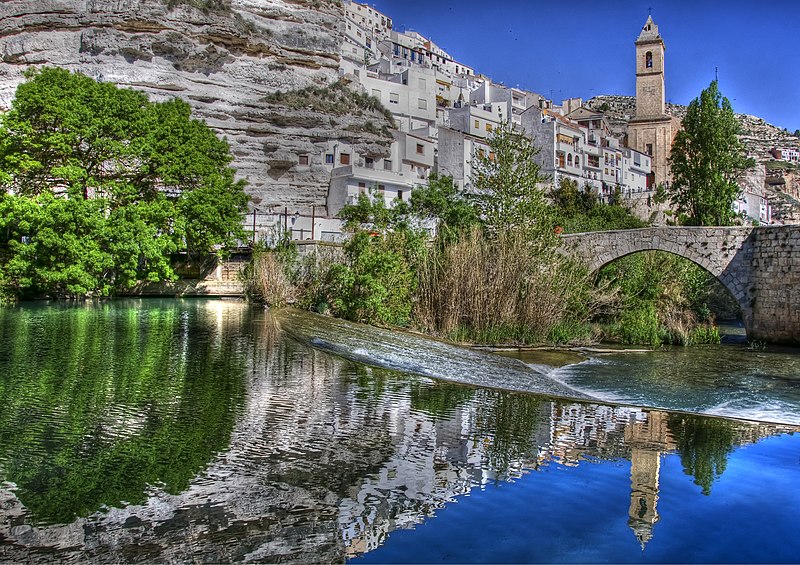 Out in the province, there are a number of atmospheric and historic towns within a two-hour drive of the capital. Among those of particular note is Alcalá del Júcar (an hour away), with barely 1,200 residents and sitting atop a hill above a gorge carved by the Júcar River. Considered one of Castile-La Mancha's most charming villages, it boasts among other things an atmospheric stone bridge; steep, narrow streets winding up toward a 12th-century Moorish castle; a unusual wavy bullring; and limestone caves expanded into storehouses in the early 20th century and these days home to a bar, a restaurant, and a nightclub. Talk about underground nightlife...

Just over an hour southwest, you'll find Alcaraz, just a tad larger than Alcalá and boasting another of Albacete's loveliest historic quarters, packed with Renaissance landmarks, also loomed over by a ruined castle, dating back to the 13th century. Much larger Almansa (above, pop. 25,000), a couple of hours east, is noted besides its own marvelous old town for its especially evocative Gothic castle, built in the 14th century. Meanwhile, an hour south of Albacete and with a population under 1,000. Also profoundly picturesque Ayna calls itself "the Switzerland of La Mancha", whose Alps are the Segura Range - and specifically a gorge created by the Mundo River, into which farming terraces have been carved out.

Closest of all to the capital city (just 20 minutes southeast), Chinchilla de Monte-Aragón (pop. 4,200) like Alcalá boasts its own impressive castle on high and under the streets another set of cave dwellings, the Cuevas del Agujero (above), believed to have been built by Muslims (and some Jews) expelled from Granada after it fell to the forces of King Ferdinand and Queen Isabella in 1492; several are now for let as holiday rentals,

Or check out one of the largest towns, Hellín (pop. 31,300), just over an hour south, whose historic centre and castle are also something of an open-air, mazelike museum of the Middle Ages both Muslim and Christian, and which also offers several interesting museums, including one devoted to local history, another to bullfighting, and the third being the Contemporary Art Museum of Castilla-La Mancha. One especially cool spot right nearby is the seven-hectare (17-acre) Tolmo de Minetada, the ruins of a settlement dating back to the Bronze Age of the 2nd century BCE, including the Contestani (ancient Iberians), Romans, Visigoths, Moors, and medieval Christian (there's also a good interpretation centre here). Hellín is also known in Spain for its special Semana Santa (Easter week) tradition of tamborada, processions of up to 20,000 people whaling away rhythmically on their drums.

Finally, fans of nature and outdoor recreation might want to check out the Lagunas de Ruidera Nature Park, near the town of Ossa de Montiel, just over an hour west of the capital and centred around more than a dozen interconnected lakes with a wide variety of bird life as well as beaches and various recreational facilities.