Bolzano is the capital of the province of Alto Adige (South Tyrol or Sudtirol) in Italy. Originally a Roman settlement, after the fall of the Roman Empire, immigrants arrived from Barvaria to the north, and it has been settled by German populations since then. Before World War 1, Bolzano was part of the Austro-Hungarian county of Tyrol, and became part of Italy at the end of this war. This cultural heritage is still prevalent throughout the region, from its bilingual street signs and town names, to its foods of wurst and spaetzle, to wines such as Vernatsch (Schiava) and Blauburgunder (Pinot Noir).

I arrived in Bolzano late in the afternoon. We will visit Bolzano both in the winter and in the spring – in winter, we will use it for a home base as we explore the local ski areas in the Dolomites. In the summer, we will Bike the Wine Roads that head both north and south, discovering the many great local wines produced here. 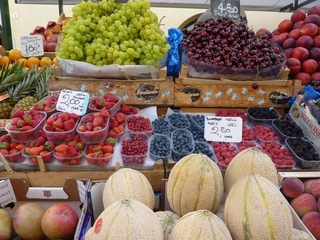 I had a short list of restaurants to visit, and no other purpose than to eat and walk around this magnificent city. The main piazza and shopping streets were just outside my door, the Piazza delle Erbe (Piazza of Herbs), the main city marketplace, close by as well. The shops and the market was closed, as it was Sunday evening, but the stands were ready for business the next morning. My first stop was a walk-by of a restaurant I knew would be closed, Cavallino Bianco. This is a very traditional establishment, in operation since the 12th century, initially built to serve the vendors in the surrounding markets. It still has shared tables, and the extensive menu features many time-honored local specialities, including leberknodel, bauernplatte, deer stew, and goulash. They unfortunately were on holiday during my visit, but I will be sure to check them out next time I am through. A very intriguing street food restaurant was just around the corner – Fischbahke. Very funky, with lots of hand-lettered signs and a very eclectic mix of furnishings. It reminded me of something you might see in Boulder, CO or some other big college town. The menu was simple small plates: mozzarella with tomato, feta with olive, speck, mixed cheeses, or a salad with grana. 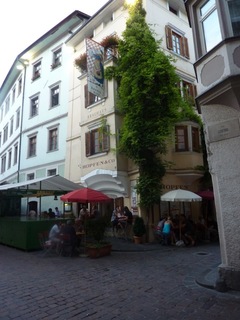 I stopped at Hopfen & Co, Piazza delle Erbe, 17, for a small bite. This is a what we in the US would call a brew pub. It offers an nice selection of local foods, accompanied by their homemade Bozner bier. A couple of small rooms downstairs, the first one dominated by their large bar. Also, some nice outside seating, where most of the action was this pleasant Sunday evening. They had a dark, lager, and weiss beers, as well as a small selection of local wines, including Lagrein, Santa Maddalena and Teroldego.

The menu included some traditional sausages, including wurstel bianchi and salsicce di noremburger, and dishes like homemade gnocchi, canderli, spaetzle, goulash, stinco di maiale (pork shank), and veal liver with rice. I very much enjoyed my spaetzle, prepared with bacon and cheese, and served in a saute pan, which many of the dishes were. It was accompanied by some of the best bread I’ve had yet in Northern Italy; a basket of assorted lighter rye breads, one with strong caraway, another with more of whole grain texture. Almost right next store is Vogele, Via Goethe 3, a ristorante serving a mix of traditional fare, as well as more Mediterranean dishes. Antipasti included prosciutto with melon, mozzerella with tomato and grilled zucchini, and cavatelli with octopus to mixed grilled meats with sauerkraut and potatoes. Also on the menu, roasted veal head with mushrooms and wine vinegar, a variety of canderli with sauerkraut to ravioli stuffed with fish served with a prosecco crema, and tagliatelle with fresh local mushrooms.

The other restaurants were located around Piazza Walthur, across from the Duomo. Pretty standard pizzarias or gelato/dessert fare. But all fairly busy on a warm summer evening. This piazza is a perfect spot to wind down the day, surrounded by towering man-made and natural wonders: the Duomo, and the Dolomites. Some great ski runs up in those mountains!