More than 100 million years ago, the area now occupied by the North Antrim coast was covered by a warm sea. Over countless millennia, the shells and bones of dead sea creatures piled up on the ocean floor to form sediments that slowly hardened into chalk and limestone.

From 60 million years ago, a long period of volcanic activity added beds of igneous conglomerates, and into these were intruded the lavas that cooled into hard dolerite and black basalt. Across this layer cake flowed the glaciers of the Ice Ages, and by the time these retreated, some 11 thousand years ago, they had carved out huge cliffs, caves and stacks to create some of the most impressive coastal scenery in the British Isles.

The white chalk cliffs have given the name to Larrybane Head, (‘Laragh Ban’ means ‘ancient white site’), which is not quite the most northerly tip of Northern Ireland. Only Banbane Head, a few miles to the west, is father north. Beyond Larrybane Bay lies the rocky prominence of Sheep Island, with the larger Rathlin Island farther out to sea - and beyond that, on a clear day, can be seen the west coast of Scotland.

Stone-Age settlers around Larrybane fashioned tools from the nuggets of flint that lay embedded in the chalk. During the 19th century, the upper cliffs were quarried for the dolerite than went to pave streets in Glasgow, Dublin and Cork. From the 1930s, for forty years, the chalk itself was taken for use in marking roads. 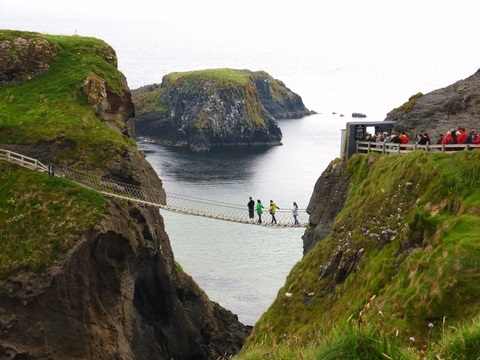 From the car park at Larrybane, a spectacular cliff-top footpath leads for a kilometre to one of the most thrilling set pieces on the Antrim coast. For some 350 years, a rope bridge has hung 30 metres above the sea, linking the rocky Carrick Island with the mainland. This was originally constructed by fishermen, who used it to reach the salmon shoals that migrated past the island’s northern tip. The shoals are now gone, but the Carrick-a-Rede rope bridge is maintained, and renewed each year, by the National Trust, for the use of the thousands of visitors who come here to enjoy the thrill of the crossing and the wonderful scenery it affords.

A maximun of eight people are allowed to cross the bridge at a time, so short queues may build up on a busy day. The crossing is perfectly safe, though it may induce fear in the nervous. Far more precarious-looking are the kittiwake and guillemot nests that cling to the vertical, or even impending walls of the cliffs beneath the bridge. From the summit of Carrick, one can look down onto two smaller islands, and back to the mainland cliffs, where the different geological layers can be seen to good advantage. An occasional dolphin or basking shark may appear in the clear, green waters.

Moving west from Larrybane Head, one passes the sandy expanse of Whitepark Bay, also a National Trust property. In complete contrast to the rugged cliffs to either side of it, this curving, two-mile strand is backed by dunes that undulate gently uphill to the road that overlooks the beach. These are densely covered by grasses, flowers and gorse scrub that provide a home for many birds and small mammals.

To the west of Whitepark Bay stands Benbane Head, and beyond that lies Northern Ireland’s only UNESCO World Heritage Site, the Giant’s Causeway (top). The geometrical symmetry of the many thousands of almost perfectly hexagonal basalt blocks has inevitably led to myths as to their origin. The most popular of these assigns its construction to the giant, Finn MacCool, in an attempt to do battle with a rival Scottish giant. Credence to this myth is lent by the fact that the Scottish end of the causeway rises from the sea at Fingal’s Cave on the island of Staffa, in the Hebrides.

In fact, the causeway was formed by volcanic activity, 60 million years ago. As the lava cooled, it contracted, and cracked into the columnar structure that was later exposed by the glaciers of the last Ice Age. Evidence for similar geological activity can be seen on the dolerite outcrops of the Great Whin Sill in Teesdale and along the course of Hadrian’s Wall in North-east England.

The Causeway is reached by a walk of a kilometre from the visitor centre that opened in the summer of 2012. This spacious centre lies largely underground, so as not to detract from the stunning scenery, and is designed to be ecologically efficient. It contains a shop and café, and many still and moving displays tell of the history, geology, nature and legends of the Causeway. Visitors who do not wish to walk to the main site can use one of the shuttle buses that run continually from the centre.

The Causeway has withstood the erosion of millennia of weathering by wind and sea, so its hard basalt can cope with the feet of the thousands of visitors who scramble over it each year. The main promontory juts into the sea for a hundred metres or so, but this is only a tiny part of the total. Where vegetation has been unable to cling to the cliffs, further outcroppings have become visible along the bays and headlands to the east. Myth and imagination have given names to these, such as the Harp, Chimney Tops, Giant’s Boot and Organ. Upon the last of these, Finn MacCool’s son, Ossian, is said to have played.

For the energetic visitor, who wishes to explore more of the Causeway Coast, there are a number of footpaths from the Visitor Centre, some of them extending for several miles, along the beach or following the line of the cliff top.

Wow, it is really amazing.