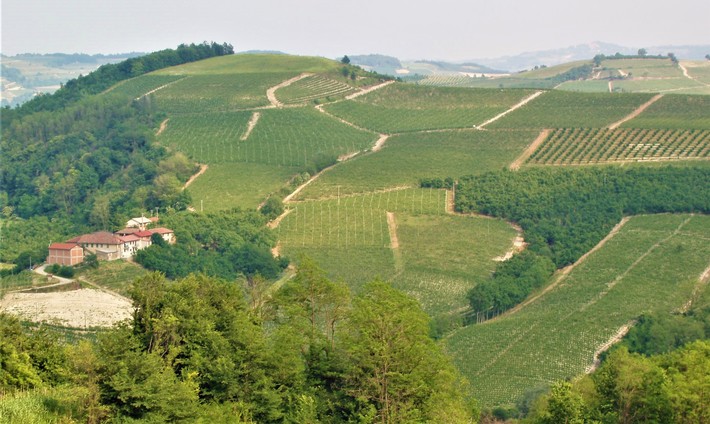 The platter that was set before me was covered with what resembled small piles of leaves from a fall lawn raking. The little brown, green and black heaps hardly invited sniffing, much less tasting. Yet sniff and taste I did.

Little did I know, before this introduction to “cheese wrapping,” that a gastronomic tradition in one corner of Italy is aging cheeses by encasing them in leaves. Nor was I aware that there are highly respected professional “cheese hunters” whose job is to seek out the best leaves in which to wrap locally made cheeses, and to know the exact amount of time each variety should be aged to bring out its best flavor.

The opportunity to learn about one of the most unusual professions anywhere is among attractions of a visit to the Piedmont (Piemonte) province of northwestern Italy. Others include its lovely landscape of gently rolling hills blanketed by vineyards, and tiny towns that grew up around imposing stone castles in medieval times.

Adding to the appeal are an enticing history and the fact that Piemontese food and wine, while not as well known as world-famous cuisines like that of France, in my opinion should be.

Alba is perched in the Alps of Piedmont, Italy

Piemonte derives its name from the phrase ai piedi del monte (at the foot of the mountains), and the towering peaks of the Swiss and French Alps soar above the area. A perfect home base for traveling throughout the region is Alba, “the town of 100 towers.”

That claim dates back to the 12th and 13th centuries, when noble families competed to build ever-taller fortified towers to both provide protection from attack and demonstrate the family’s wealth and importance. While only four of the original structures still overlook the town, the name has stuck. Alba also boasts other enticing relics of its history. Among these are portions of the ancient city walls, fragments of frescoes and other remnants of Roman rule.

The magnificent scenery of Piedmont, Italy resembles a lovely painting 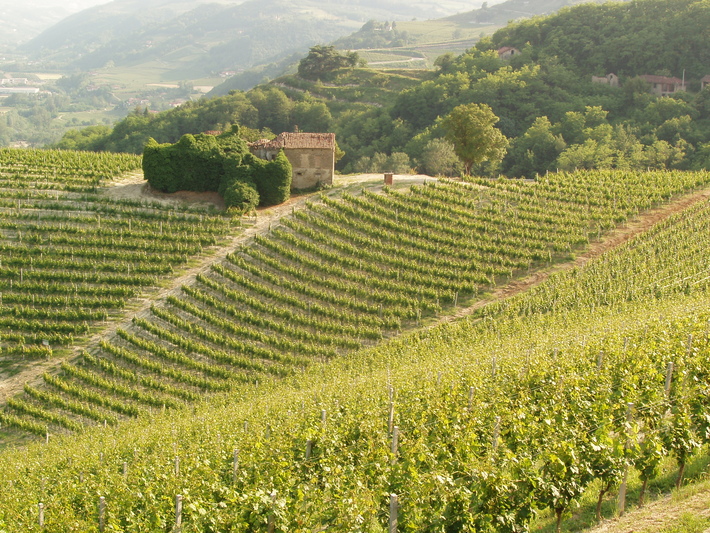 Outside of Alba, the scenery becomes etched in the mind’s eye like a series of paintings. Roads wind through tiny towns, in places so narrow that when two cars meet, one must back up to a wider spot so the other can pass. Stone buildings line narrow cobblestone streets.

Church steeples rise above a sea of red tile rooftops as if gazing out at the surrounding view. Many a hilltop is capped by an ancient castle, whose massive walls and turrets recall times of past grandeur.

Each town in Piedmont, Italy has its own intriguing stories to tell

Along with their common attractions, each town also has its own unique appeals and stories to tell. Serralunga d’Alba is one of only 11 villages where Barolo wine may be produced. Many connoisseurs rank it, along with Barbaresco, as Italy’s most prestigious red wines.

The town of Grinzane Cavour and the 12th century castle of the same name also have a strong connection with viniculture. Among exhibits in the fortress is the Regional Piemontese Wine Cellar, which showcases and offers tastings of a sampling of the area’s vintages, plus several grappa brandies. Also intriguing is the Masks Room, whose soaring ceiling is painted with portraits, crests and a series of fantasy monsters and allegorical creatures that range in countenance from droll to macabre.

One proud claim to fame of Cherasco is that Napoleon Bonaparte described it as “le plus beau coin d’Italie.” Even those who might not agree that the town is “the most beautiful corner of Italy” can appreciate the original star-shaped Roman bastion and the medieval architecture that abounds there.

The town’s elegant porticoed arcades continue to protect pedestrians from sun and rain, as they did in the past. Among the sumptuous palaces is the Palazzo Salmatoris, where the ruling Savoy family spent many a summer holiday. A graceful “Triumphal Arch” was donated by a citizen to give thanks that the plague which wracked the region in 1630 spared the citizens of Cherasco. Food is fabulous, wine is wonderful in Piedmont, Italy

Anyone who travels to Italy’s Piedmont Region is sure to leave with an appreciation of the importance of both food and wine in the lives of its people, and probably with a few extra pounds as well. Cheese and truffles, especially white truffles, hold a place of honor on many a dining table and in the local cuisine and culture.

Cheese-making is closely identified with the region, having flourished there since the first century A.D. Many farmers continue to follow traditional family recipes, which often call for a mixture of milk from cows, sheep and goats.

A visit with a “cheese hunter” turned out to be one of the more unusual experiences of my trip. Gianna Cora described the local tradition of “maturing” cheeses by wrapping them in various kinds of leaves to both preserve and flavor them. The foliage which is employed for those purposes includes leaves from chestnut and fig trees, as well as cabbage, cauliflower and other vegetables. I also encountered, but chose not to sample, cheeses wrapped in grass, tobacco leaves and goat hides. Cheeses wrapped in leaves are a Piedmont specialty.  Photo by Victor Block

Gianna reported that each year he gathers and uses more than 100,000 chestnut leaves alone. (I didn’t inquire how he knew the number.) Explaining that about three dozen neighbors share his unusual profession, he claimed – without embarrassment at the pun – that he is recognized as the “Big Cheese” among them. It had not taken long after my arrival at the destination to observe and experience first-hand that the Piemontese people are as serious about enjoying cheeses as Gianna is about doing his best to make sure they taste as delectable as possible. Most restaurants serve a wide selection of locally produced types. I observed diners discussing their selections with the server, asking for small samples before ordering, then nibbling on their choices with an enjoyment that was obvious even from across the room.

Enjoyment of Piedmont’s magnificent scenery, ancient towns and intriguing history might not be demonstrated so clearly. But this corner of Italy has much to recommend a visit to savor the flavors and other attractions it has to offer.

If you go.  Travelers from the United States to Italy must present certificates that they have been vaccinated against Covid 19, and have received a negative swab test.  For more information log onto italia.it.