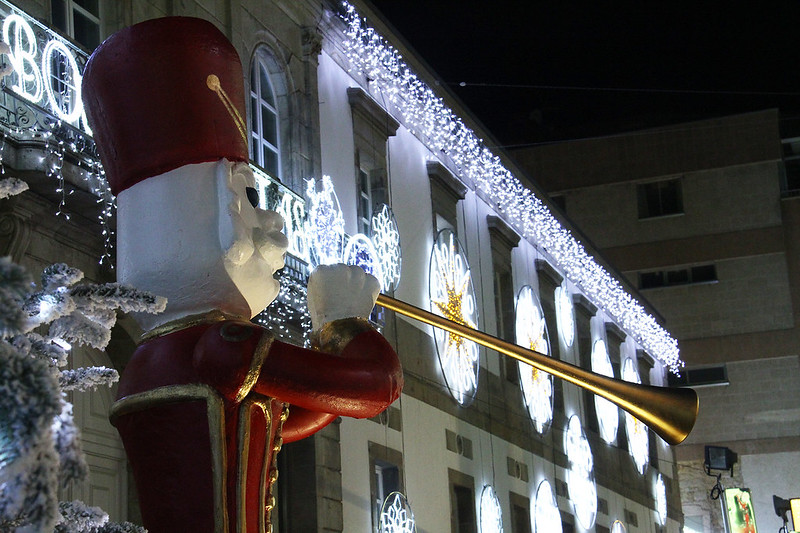 With just over a week to go before Christmas, cities across Spain, as many other cities in the world, are pulling out the stops and decking the halls with boughs of jolly. This blog has covered the festivities in biggies like  Madrid and Barcelona, but plenty of other doings are afoot in all this countries autonomous communities and provinces. Today I'm travelling to my own home region, green Galicia in the northwest - and specifically to a pair of beautiful, historic, yet relatively under-the-radar cities, Vigo and Pontevedra. Care to join me? 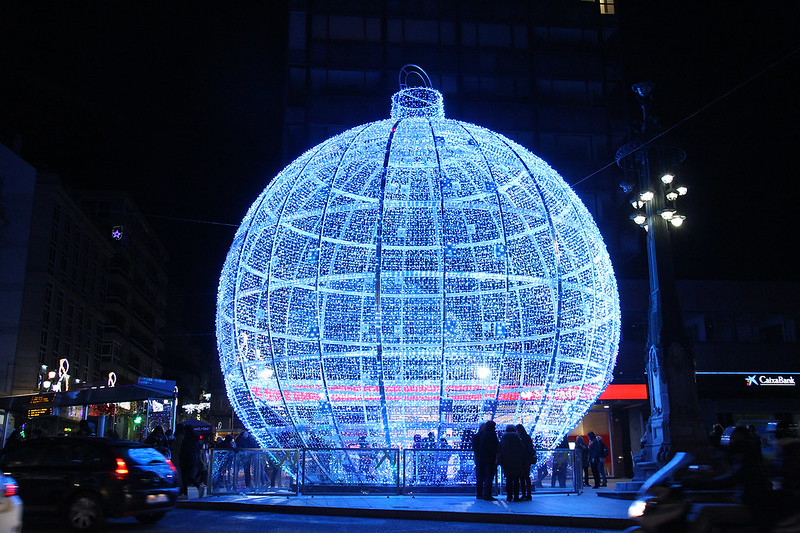 Down near Galicia's southwest corner, its biggest city is wrapped in green on one side and blue on the other – that is to say, between forested mountains and the vast, sparkling Atlantic Ocean. Average December temperatures run from highs around 12° Celsius (54° Fahrenheit) during the day, down to 7°C/45°F at night, and though winter weather here and elsewhere in Galicia tends toward the drizzly, its lovely Cidade Vella (Old Town) is a delight to wander, and all the more so during Yuletide, when it and much of the rest of the city transforms, with highlights such as:

Rising 35 metres (115 feet) in Vigo's central square Porta do Sol is lit every day at 6 pm, and throughout the evening from 6:30 onward there's an impressive sound-and-lights show to delight onlookers.

Another local holiday classic sits at the corner of Rúa do Príncipe and Rúa Urzáiz. Besides its gaily glowing lights and immposing 12m (39-ft.) height, what's especially magical here is that folks can walk inside it and feel like they're in another world.

Another classic can be found in the Rosalía de Castro district at the corner of Rúas Pontevedra and Inés Pérez de Zeta. Against the backdrop trees and snowy mountains, it's especially a kid favourite, and can also be enjoyed from inside.

Locals also love wandering inside this 10-by-9m (33x30-ft.) installation, set up where Gran Vía meets Rúa Urzáis, not far from the Christmas tree.

On Rúa do Príncipe in front of the Museum of Contemporary Art, a cozy little wooden cabin, Santa receives thousands of good little girls and boys every day, then switches over to being the headquarters for the Reyes Magos (Three Kings) who bring the kids more presents every 6 January.

In Alameda Park, this brilliantly lit Ferris wheel rises 60m (197 ft.), surrounded by a cheery Christmas market is made up of nearly 60 stands offering the usual panoply of decorations, gifts, and holiday yummies, as well as bars and kiddie rides and games. There are even snowmaking machines which blanket the grounds in the cold white stuff every hour. Plus over at the corner of Rúas Londres and O Calvario there's a second, more laid back Christmas market.

Slipping & Sliding on the Snow Hill

Over on the waterfront next to the venerable Royal Nautical Club, kids from small to grown up can slip, slide, and whoop their way down a 50m (164-ft.) slope.

Rúa do Progreso, a couple of blocks south of Rúa do Príncipe, is closed to traffic and transformed with Disney's help into the glittering world of Frozen II, complete with visits from Olaf the snowman and other characters from the beloved movies. 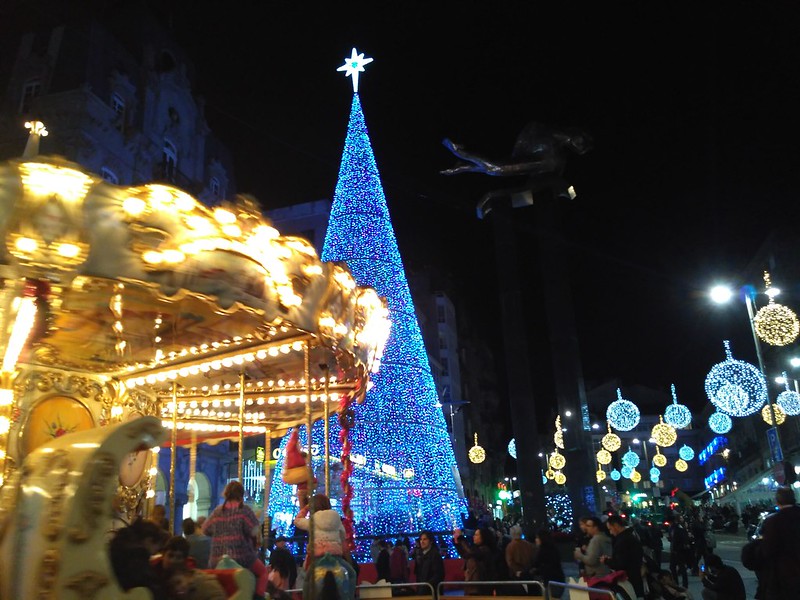 Just 15 minutes or so away by car, on a ría (estuary) in the Rías Baixas region along the southern coast, this city of 83,000 is not only second in Galicia after Santiago de Compostela in terms of history and heritage (dating back to Roman times), but is also celebrated in Spain - and indeed, the world over - for completely banning most vehicles in its historic centre for 20 years now.

And here, too, there's a walk-in Christmas ornament - actually a pair of them, one in front of the Audiencia Provincial courthouse, the other at the corner of Rúas Peregrina and Daniel de la Sota.

In addition, there's a raft of fun stuff going on through 12 January. The Praza de España hosts Pontexogos, a family-oriented holiday park with all sorts of attractions and activities, including a ginornmous (450m/1,476-ft.) igloo; an illuminated, 150m (492-ft.) zipline; musical performances; and appearances by Santa and the Three Kings. Over in Praza do Teucro, the PonteNadal is a colourful handicrafts market perfect for holiday shopping. And out at the modern Recinto Ferial convention/events centre in the city's northwest, Mundonadal offers another raft of fun activities and attractions such as bounce houses and its centrepiece, an ice-skating rink 30m long and 18 wide (98x59 ft.).

I hope you've enjoyed our little tour - and as we Galicians say, bon Nadal (Happy Christmas)!

I could not agree more with this! great Christmas atmosphere. They have done a great job

Brings back great memories of albarino wine and the thermal waters of Ourense.  You can see my article here on Tripatini: https://www.tripatini.com/group/jewishheritagetravel/forum/topics/s...