Come rain or shine, West Africa has it all! 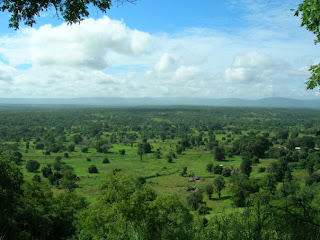 Sitting in the cabin of a hotel security guard in the Gambia, sipping Ataya ( a bitter tea), I was deep in discussion about tourism in the area, and the decline in the so called ‘beach tourists’ over the past few years. Abdul, my new found friend, was speaking with a serious tone about how a lot of people living in the area were relying on tourism to survive and put food on the table. He was concerned with the decline and made a point of saying that tourists were only coming in the dry season, that someone should try and educate the tourists that there is a lot still to do in the rainy season. So, here I am writing this blog about the wonderful and unique things you can do, see and visit in West Africa come rain or shine.

West Africa is one of the poorest regions in the world, but if wealth would be determined by heritage, then it would be one of the richest.

The geographical region of West Africa abounds with diverse natural habitats where thousands of species of plants and animals thrive. From the dry Sahel region of Senegal and Mali, passing through the tropical rainforests of Sierra Leone and Ghana, down to the equatorial vegetation of Cameroon, there are endless activities to be carried out. How about a rainforest trek in Sierra Leone, visiting the lush waterfalls, witnessing the songs of the variety of bird-life living in the canopies teaming with life; or maybe taking a trip up the Gambia River on a local fishing pirogue visiting the fishing villages along the way and sampling the fresh water fish dishes typical to the region?

These unique activities can be experienced during the dry season, but the rainy season offers another, more lively side. The forests are full of energy, teaming with wildlife making the most of the presence of water; migratory birds, living on an age old instinct arrive from all corners of the world to relish in this lush environment rich in food and ideal for a good rest; plants that have been waiting months for the rain to come let loose their beauty and release their multicoloured flowers, looking as if they are showing off. Another world opens up to the observing eye.

But the natural beauties of West Africa are only the tip of the iceberg! Culturally, the West African region in one of the most diverse in the whole of Africa, and a lot of the cultural events, festivals and rites are as much alive and intact today as they were back in the days of the great Kingdoms. Roberto, from TransAfrica operating for 30 years in West Africa offers an insight into the cultural events that can be witnessed in the rainy season:

“Along the coast of the Gulf of Guinea, it rains from May to July and from September to the start of November, and inland from May to September. Contrary to common belief, it does not rain all the time. There are heavy rains, but they do not last long, maybe an hour or so, and if it is more than a couple of hours it is an event.” He says.

“However, despite the rain, or from the locals’ perspective, because of the rain, a number of big events are celebrated. In Ghana for example, the Asafo festivals in Elmina start in July, the festival in Ada starts in August and the big Accra festival starts in the second half of the same month. The end of September marks the main Voodoo festival in a town called Glidji, in Togo; and then the Yam festival in a village called Bassar, in the North of Togo. So maybe the rain could give travellers plenty of opportunities to witness genuine traditions first hand and a good reason to travel to West Africa!”

But also, the abundance of Historical sites, from relics of the infamous slave trade, ancient vestiges of prosperous Kingdoms, archaeological sites showing signs of the first steps of humanity, and a wealth of museums, libraries and university archives, make a rainy hour or two a great opportunity to learn more about facts which have shaped the way that we live today. Here is a pick of the different rainy day attractions:

In Benin, the Abomey Historical Museum houses the palaces of the ancient Kings of Bénin including King Guézo and King Glèlè; and the Ethnographique Museum, which is Porto Novo’s first museum, currently holds a large collection of archaeological artefacts from different eras of humanity.

In Sierra Leone, the Sierra Leone National Museum is home to the ‘de Ruyter stone’, the main attraction of the museum. The replica of a 1664 rock graffiti, scratched by bored Dutch sea captains during a lull in a military expedition against the English, was discovered in the course of drainage work on the waterfront in 1923. It stands as the oldest archaeological evidence of a European presence in the strip of land.

Senegal, on the other hand, is the location for Gorée Island, one of the most famous, or even infamous, vestiges of the slave trade. ‘La porte du non-retour’ (The door of no-return) is one of the main attractions of the island and depicts the horrendous and brutal trade which was allowed to be carried out for more than 400 years.

So there you go, West Africa is not only a ‘dry season’ holiday destination, it also has the potential to be a great ‘rainy season’ destination for those seeking the thrills of new discoveries, the excitement of participating in age old cultural events, the satisfaction of learning about important historical facts and the excitement of witnessing nature at its best. Come rain or shine, West Africa has it all!

Comment by John Kipper on February 13, 2010 at 8:55am
Fantastic blog post, dude! (I assume u r a dude from the picture). Sure makes me want to go. I think I was meant to be some kind of intrepid explorer. Right now I'm mostly exploring my cubicle, but when I get a chance (not to mention $$$), I'm right there with you!!