Detained by the Police in Kyrgyzstan Osh Bazaar was a hive of activity. Endless arrays of fruit and vegetables, clothes and mops, electrical components and everything else the people of Bishkek could want were on offer. It also had a contingent of policemen, two of whom were watching me, though I didn’t know it at the time.

I spotted what I was looking for - a stand peddling kumis, fermented mare’s milk. Peering into the large urn, I mimed to the lady in charge that I’d like a cup of Kyrgyzstan’s national drink. After the usual confusion, she produced a bowl and ladled the white liquid in. I handed over thirty som (40p) and took my brew to the side where I could sample it unhindered.

After swirling it around for a few seconds, I deemed it lump free and raised the bowl to my lips. And then I took a sip. The taste hit me immediately, a horrible vomit flavour, mixed with curdled cheese. In the resulting convulsions, I spilt some down my shirt so put the bowl down and fled.

And then they pounced. 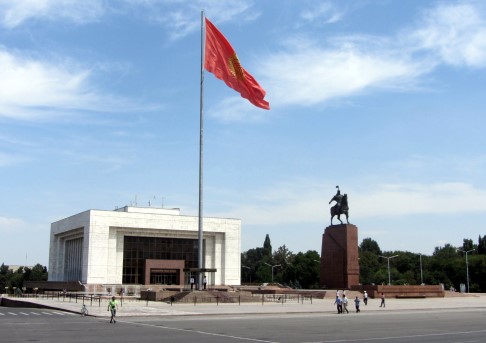 Two blue-uniformed policemen with massive black and red caps blocked my path. One looked about thirty, the other was younger, barely out of his teens. Both were unsmiling.

“Passport,” the older of the two barked. He had a wispy black moustache which I reckoned he could quiver at will for sinister effect.

This was just my luck. The only day I’d left my passport at the hotel was the day someone actually wanted to see it. I told them this and they conferred for a moment. Mr Moustache shook his head. “We need to see. Otherwise big problem.” He’d emphasised the word big, stretching the vowel out.

Fortunately, I had a photocopy of it in my wallet and so fished it out while a group of young boys hovered nearby. They were watching me suffer with barely disguised glee. I handed the piece of paper over, hoping it would suffice.

“Eeengliz?” said Moustache Man after staring at the photocopy.

I nodded and smiled. I didn’t want to annoy them in away way. Both men studied it further and then conferred again. The patrons of Osh Bazaar were all giving us a wide berth, except for the boys who still lurked nearby.

“Visa?” Mr Moustache said eventually. I had expected this request but without my passport, there was no way I could show them it. But I reasoned they already knew this. “Without visa, big problem.” said Mr Moustache, faintly quivering his facial hair.

Both men stared at me, and I began to feel a little unnerved. Finally Mr Moustache spoke. “Come,” he stated bluntly.

I pretended I didn’t understand and pointed in the opposite direction. I grinned an inane grin hoping the men would think I was a simpleton and let me go. They didn’t. Mr Moustache touched my shoulder in an attempt to get me moving, but I stood my ground.

Both men blocked my path. The older man shook his head and tutted. “No. You come so we deal with things.”

What choice did I have? I could hardly flee though the market with some rancid mare’s milk sloshing about in my innards. And anyway, where would I run? They would capture me in seconds, possibly frothing at the mouth. Besides, they were the police! People like me didn’t run from the law. Finally, I acquiesced and allowed the officers to lead me away. Some people stopped to watch me leave, but most averted their eyes and carried on with their business. The only people enjoying my torment seemed to be the group of boys. 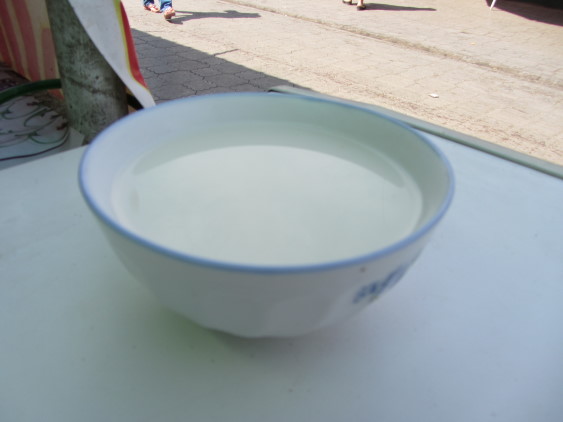 As we made our way through the market, we passed the stall where I’d bought the mare’s milk. My bowl had gone, I noticed, and Mr Moustache stopped to mime someone drinking and then grimacing. He pointed at me and laughed. The boys were shouting and laughing, causing some people to stare. Mr Moustache turned around and yelled. They swiftly scarpered.

I nodded enthusiastically and the man smiled for the first time. He seemed the friendlier of the two. He also decided to mime me drinking the kumis and laughed uproariously at his own impersonation. I laughed too because the situation was utterly absurd. It got even worse when he followed it up with a chillingly accurate impression of a horse neighing. He then mimed someone milking it, presumably educating me about where the kumis had come from.

We continued our walk through Osh Bazaar and Mr Friendly asked me something but I couldn’t understand him. He resorted to mime once more and swung his arms about in a swimming-like motion. I nodded earnestly and smiled. Yes I like swimming! I like it very much, especially in a vat of mare’s milk. Now please let me go!

We rounded a bend and came to a dark little part of Osh Bazaar. Fewer people were here and it crossed my mind that I might be about to receive a beating. I considered making a dash for it, but for all I knew, there could be security cameras everywhere making escape impossible. Shaking my head resignedly, I followed the policemen into a cramped and stuffy windowless room filled with three desks.

A few other policemen doing nothing in particular were inside and all looked up when I entered. I quickly became the centre of attention. A quick conversation erupted but I didn’t understand any of it. A fly buzzed by the low ceiling and Mr Moustache directed me to a chair on one side of a spare desk. I sat down, awaiting my fate in my first Kyrgyz police station. Mr Moustache sat opposite me while Mr Friendly stood by his side. Bad cop, good cop. They spoke to me in thick Russian and I shrugged. I can’t understand you. They spoke some more in Russian but I stopped them by saying. “Nyet Russki!”

Suddenly one of the policemen sat a table behind me piped up. “They want to know why you in Kyrgyzstan?”

Do they indeed. I turned to the new man and said, “Please tell them I’m a tourist from England.”

The policeman gave this information causing Mr Moustache to waggle his whiskers at me. “Where hotel?” he asked, reverting back to English.

I pulled out a card the hotel had given me when I’d checked in. It clearly stated I was a guest there. I handed it over. Both men studied it and then put it on the table between us.

Mr Moustache gestured to my bag and decided to do some mime again. He acted out a strange scenario that looked like he was injecting himself with something. His sidekick nodded like a galoot. I quickly worked out they wanted to know whether I had any drugs.

They got me to empty my bag and remove everything from my pockets. Mr Moustache immediately picked up my wallet and began leafing through the Kyrgyz som and US dollars I had, but Mr Friendly was more interested in my camera. He picked it up and tried to turn it on. After failing to do so, he handed it to me to do the job. I powered it up and he started flicking through all the photos and videos I’d taken that day: the man carrying a horse, the Mig fighter Jet and me drinking the kumis. He seemed particularly interested in the latter and asked me to play the video. Within seconds he was laughing furiously, pointing at the camera and then at me. He showed it to Mr Moustache who smiled but continued to poke about inside my wallet. After watching the clip a third time, the strange policeman did his horse neighing impression again, closely followed by the weird swimming arm motions. Maybe he was insane.

Mr Moustache finally placed the wallet with the rest of my stuff on the table and gestured that I could pack it all away. I did this while his pal still fiddled with my camera. In another moment of unreality, he asked me to pose for a photograph with my own camera. I did so, and he handed the camera back. When I’d finished packing, I looked at Mr Moustache, wondering whether he’d helped himself to some of my cash in the confusion.

“Finish,” Mr Moustache said. “You leave.” He stood up and offered his hand, which I shook involuntarily. The other man did the same and I left the room, sweating and wondering what the hell had just happened.

Outside, I counted my money but it was all there. Then I looked at the photo the young policeman had taken. It was rather good. If it hadn’t been for the photo, I might have thought I’d dreamed the whole episode. If you have enjoyed reading this, then perhaps you might want to read the book this excerpt was taken from. It's called The Red Quest: Travelling through the former Soviet Union by Jason Smart.

It's available on Amazon as a paperback and Kindle version. 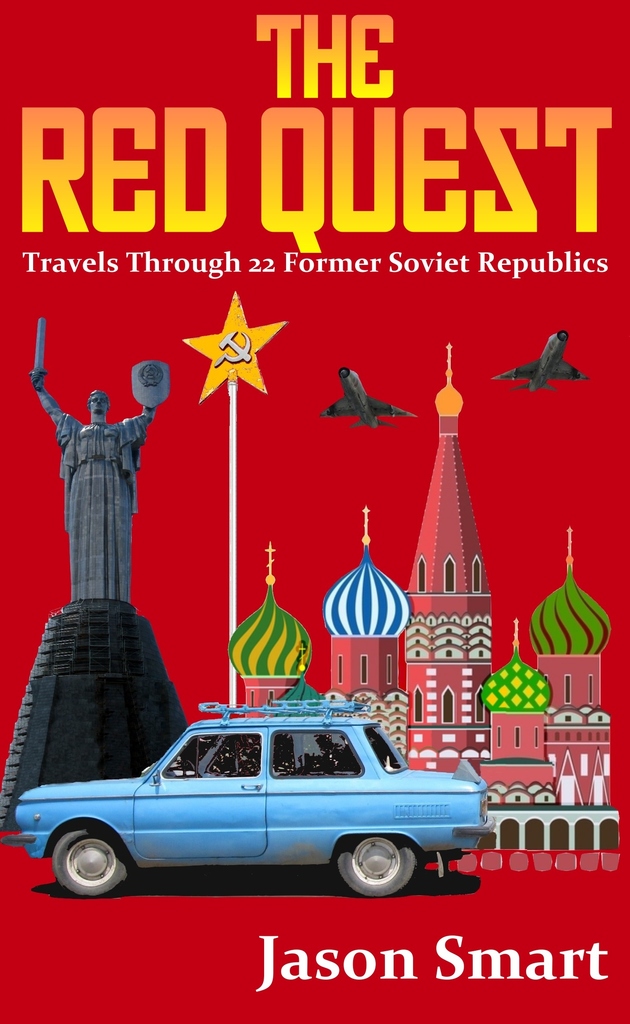