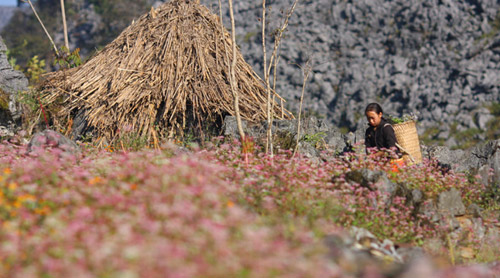 If you set off from Vietnam's capital Hanoi in the early morning, you can be in another world by the afternoon – Dong Van (spelled Đồng Văn in Vietnamese) is the country's northernmost town, sitting more than 1,000 metres above sea level in a green valley surrounded by rocky, awe-inspiring mountains in the province of Ha Giang, one of the most spectacular rural destinations in all southeast Asia. It's truly a far cry from the stifling heat/humidity and hectic streets of Hanoi, especially at the height of summer.

Dong Van is also the capital of the district of the same name, one of four bordering Dong Van Geopark, a plateau featuring large swaths of karst landscape, distinctively pointed limestone including with many fossils of creatures that walked the earth 400 to 600 million years ago. The plateau’s average elevation is 1,400-1,600 meters above sea level, and the route up the mountains to the town is precipitous and slow-going, but the views of the imposing rocky mountain ranges make the trip a constant pleasure. 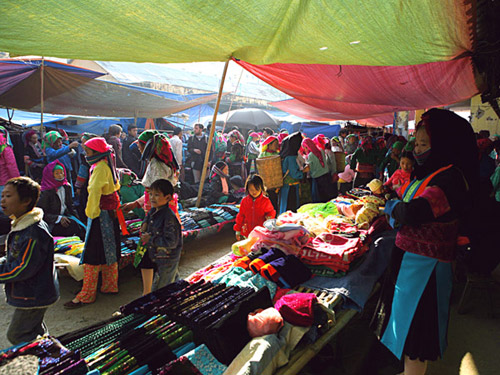 In the town itself, one of the highlights is the Sunday-morning market, when H'Mong come down from villages in the surrounding hills to sell their wares including produce, meat, brocaded fabrics and fighting roosters, as well as eat, drink, and socialize with friends and prospective romantic partners.

On our visit we also came across a group of H’Mong preparing for a music contest that was to be held in the morning. Some of them were playing khen (pan-pipes) and ken la (leaf-horns), while others were harmonizing their sweet voices.


Dong Van’s old quarter was lit up with red lanterns hanging from the window ledges of houses along every street and all around the market. As night fell, the town took on a wonderfully fanciful light in the midst of the mysterious rocky highland.


The locals always celebrate full-moon nights on the 14th, 15th and 16th of the lunar calendar to preserve and promote the town’s cultural heritage and customs. During these festivals, cultural and artistic activities take place in the old market. Visitors can taste the local cuisine, watch musical performances, check out some of the traditional handicrafts, and much more.
In the evening, an ebullient crowd of H’Mong begins to gather. Soon there are more than 300 artisans and artists from all corners of Ha Giang province ready to perform. A small stage has been set up for the occasion and there is music and dancing; everyone is happy to be part of the show. We listen to the melodies as well as the sounds of the valleys, forests and mountains, and everyone is smiling. 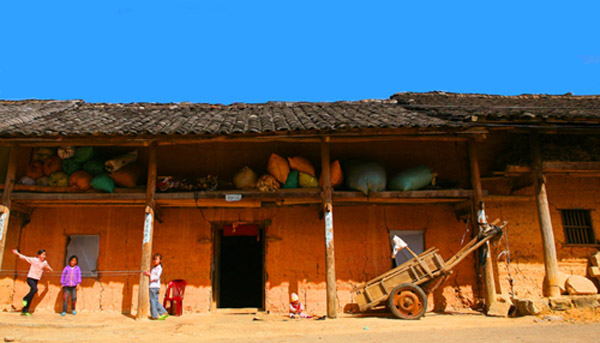 There are 40 houses in the centre of Dong Van’s old quarter, which are most beautiful at sunrise or sunset when the dark grey houses are suddenly brightened by golden sunlight. The town was built in the early 20th century and, in the beginning, mainly Tay and Hoa people lived here. During the 1940s and 1950s, the Kinh, Dzao and Nung tribes also settled in the area. The two-storey houses are a combination of architectural styles and there is influence from the Zhongnan region of China. The houses are built with thick earthen walls, dark brown wooden frames and stairs and dark grey Chinese yin and yang tile roofs. Each house has a yard and three-step staircase made from bluish limestone pillars. The houses are designed according to the principles of feng shui, balancing the natural and structural energy that courses through the environment.

By nine in the evening, the old quarter is empty and quiet. The ceremony is over; the winners have been awarded their prizes and almost everyone has wandered off home. I stroll over to the old market which was built in 1920 as a central trading place for local tribes to exchange clothes and tools. At night, the market is closed for business but open for romance. Some of the young women are beautifully dressed and the young men do their best to woo the ladies by playing their khen or ken la. 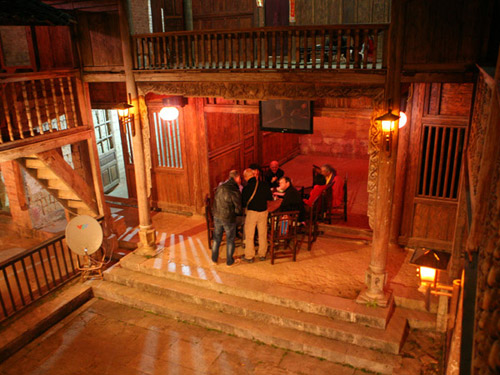 Leaving the young ones, I step into Pho Co Café (above), located in one of the oldest houses in town (the owners claim it was built in 1890). By a flickering oil lamp I sit sipping my hot tea and gazing out at the street through the faded wooden window bars. I can hear the sound of a khen and a ken la playing in response.
The café stays open till midnight and I am perfectly consent to sit there, soaking up the sense of mystery exuded by Dong Van town. As I walk home through the shadows in the still night, I am already looking forward to the first rays of golden sunlight that will herald the dawning of the day.
Source: Dtinews