Door County is the vacation spot for anyone loving small, intimate lodging; water and boating; cherries; local shops; cheese; great cocktails and wine; fish boils; a traditional fish fry; and artwork. All of this is available in a small town atmosphere on a peninsula about three hours north of Milwaukee. On a recenttrip, several friends and I headed to this area after spending three days in Milwaukee.

There are many unincorporated small villages that make up Door County. The southernmost town is Sturgeon Bay, the largest Door County town and county seat, and is a drive of about a half hour from all the other unincorporated villages.

Our lodging was in Bailey’s Harbor at The Rushes on Kangaroo Lake. (No, there are no kangaroos in Door County; someone just thought from an aerial shot that the lake was shaped like a kangaroo.) We found our unit spacious with two floors to it and a wonderful fireplace. None of the small towns are very far from each other so it was easy to get from Bailey’s Harbor on the Lake Michigan east side to the west side towns on Green Bay.

We learned that roadhouses, supper clubs, fish frys, and fish boils are staples in this area. Our first night we ate at the iconic Coyote Roadhouse in Bailey’s Harbor, where you sit at the bar for a drink and then order your fish fry. They offer over 30 different bottled beers plus around ten on tap. Martinis and Old Fashioneds abound, too. They are known for their “heaping loaf” of fried onions. We were there for their Friday Fish Fry of either grouper or perch with cole slaw and potatoes. The wood paneling added to the warm atmosphere of this place.

Al Johnson’s Swedish Restaurant in Sister Bay is a must for breakfast. Goats graze the sod roof atop this casual log-cabin restaurant serving traditional Swedish fare. We ordered the Swedish pancakes with lingonberries, and Swedish meatballs. Delicious!

There are lots of wineries in this part of the state, where wines are made from grapes unique to the area, such as the Marguette grape, that have been hybrid by the University of Minnesota. In addition, you will find some wineries that offer cherry wines since cherries are a huge crop in Door County. Some of the wineries we enjoyed were Harbor Ridge Winery in Egg Harbor,  Stone's Throw Winery in Bailey's Harbor, Door Peninsula Winery in Sturgeon Bay, and Door 44 Winery in Sturgeon Bay.

Fish Creek proved to be my favorite of the small towns because there were so many great little shops.

A must see here is Lautenbach’s Orchard Country Winery and Market, around since 1955. After sampling the unique wines, go out back to see the Cherry Pit Spit area where contests are held every year to see who can spit a cherry pit the farthest.

In addition, some of the shops I enjoyed were JJ Jeffrey Taylor Gallery, a shop chock full of beautiful art pieces ranging from wooden tables to paintings, sculpture, and fine jewelry.

After you have been to this gallery, head next door to Hide Side Corner Store, a completely unique shop with a little bit of everything ranging from shoes to motorcycles to antler light fixtures.

We were too early in the season, but Fish Creek Scenic Boat Tours offers boat rides and a chance to get out onto the water.

Another quintessential spot is The White Gull Inn in Fish Creek. For breakfast, try their Cherry French Toast consisting of two slices of egg bread with pockets of cream cheese and Door County cherries. This French Toast was winner of the “Best Breakfast in America

We later came back to The White Gull Inn to witness a true Fish Boil, a must dining experience in Door County. A fish boil features Lake Michigan whitefish cooked outside over an open fire as the Scandinavian settlers did hundreds of years ago. The fish pieces are placed in a large cauldron of boiling water with red potatoes. When the fish oils rise to the surface, the Master Boiler tosses kerosene on the flames, causing a boilover and spilling the fish oils over the side. This is very dramatic which is why you need to arrive early to observe the process. The fish and potatoes are served with lemon, melted butter, coleslaw, homemade breads and cherry pie.

Two spots we loved in Sister Bay were the Door County Creamery and Sister Bay Bowl.

Owners of Door County Creamery, Jesse and Rachael Johnson, began making their cheese in 2010 and opened the

creamery in 2013. They fell in love with fresh, local cheeses in France and wanted to offer Door County guests a chance to do the same with their local cheeses.

At Door County Creamery you can enjoy a walking tour of their goat farm where you meet the goats and see how they are raised as well as the making of the cheese. In addition, on this tour they offer homemade goat milk gelato, cheese tasting and lunch on the patio at the creamery. Transportation is provided, but you must sign up in advance because their tours do become full.

Wisconsin consumes more brandy than any other part of the country which may have something to do with an Old Fashioned being made with brandy in this state. At Sister Bay Bowl, bartender Penny Anschutrz makes a truly 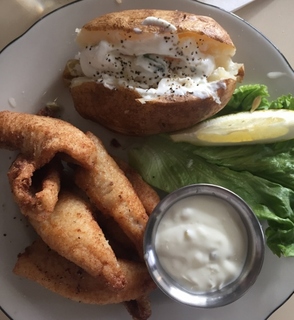 fine Old Fashioned. The atmosphere at Sister Bay Bowl is funky, fun, and retro.  We had to take advantage of the opportunity to bowl a game. They also offer a lake perch Fish Fry, complete with all the fixings and voted one of the best in the area.

The Sister Bay Bowl is an authentic, family-owned supper club. These supper clubs are part of what makes Door County special. Originally, a supper club would be a place you would order a drink at the bar and while sitting there, order your dinner to be delivered to a table. In addition, there was live music and dancing.  In 1958, Earl and Rita tore down the dance hall and built a six-lane bowling alley. Door Artisan Cheese in Egg Harbor has recently opened their doors. At the cheese making facility, you can see cheese being made in large steel containers. Door Artisan Cheese is the dream of master cheesemaker, Mike Brennenstuhl. He wanted to provide a culinary experience with an on-site cheese factory offering tours to the lower level aging caves, a place to purchase cheeses from the deli, and a restaurant to enjoy elegant and creative dining, Glacier Ledge Restaurant. Cheese curds are a Wisconsin staple, and Mike let us sample cheese curds that were so fresh that they “squeaked” when you ate them.  Glacier Ledge Restaurant features elegant dining either indoors near the hearth or on the outdoor patio.  Chef Lawrence Hutchinson, formerly an instructor at the culinary school in St. Louis, offers his take on casual fine dining, inspired by seasonal, fresh ingredients. We were delighted with the creative salad of mixed greens, salmon and potato hash, Brussel sprouts, and grapefruit with a parsley bacon dressing. Dessert was a creamy panna cotta topped with a blueberry puree.

The small taverns in Door County provide some of the most unique and warm atmospheres for dinner. One of the highlights of our trip was Bayside Tavern in Fish Creek. In August of 1975, Bob and Elaine MacDonald bought the Bayside Tavern. Be sure to sit at the bar and meet one of the owners, Christie MacDonald. In addition to hearty food, including “Smilen” Bob’s Barroom Chili served with spaghetti noodles and beans, Christie shared with us her specialty that she makes for gifts which is called Cherry Bounce, “cherry pie in a glass.” Christie’s hospitality made our evening very special.

Money Magazine calls Door County County, Wisconsin "one of the top tourist destinations in the United States,” and we all agree. Many thanks to our hosts, Jon Jarosh and Jen Rogers, with the Door County Visitor Bureau, who helped us experience the charming and special place called Door County.

I absolutely LOVE LOVE LOVE Door County! Living only about 5 hours southwest, I am able to make the trip occasionally - but never often enough. As often as I have been, I always manage to find something new, or somewhere I have not been previously to throw in between visiting my favorite places! Fish Boils, Cheese Curds, Sunsets and Cherry anything - that's Door County.