Who would have thought when I moved from Portland, Oregon, (home of amazing Pinot Noirs) to Southern California, I would be sitting in the backyard of a Cape Cod next to a pool at a long, umbrella-covered table in the quaint Floral Park neighborhood of Orange County's Santa Ana at the beginning of December sampling Oregon Pinot Noirs. Life couldn’t get much better.

A group of writers with IFWTWA (International Food, Wine & Travel Writers Association) were guests at the Southern California home of David and Anya de Lancellotti to sample the Formaglini Vineyards estate wine inspired by his Italian heritage. David is proud of his Italian roots, which are the true soul behind his wines - a pride he wishes to pass on to his children. In fact, the name Formaglini was his paternal grandmother’s maiden name. The family is from a village called LaQuercia just south of Bologna, which explains the oak leaf as Formaglini Vineyard’s logo, the literal translation of Formaglini in English. As a special treat before we started our Pinot Noir wine tasting, David shared an interesting bottle of Rosata, Raffaele Palma Salicerchi 2011, from the Amalfi Coast. This is a wine very few of us have tasted, and its steely, clean, dry rustic flavor made partially from the Aglianico grape, a grape cultivated by the Phoenicians and having the longest consumer history provided that stylistically different taste that intrigues David as it did us.

Our glasses were filled with another delicious and unusual wine, Quintodecimo Via Del Campo 2013, a wine from the Amalfi coast known for its lemons. This wine possessed an aroma of lemon on the nose and a wonderful lemon curd palate. This wine would be a delightful summer sipping wine, and we all enjoyed the opportunity to try another unique wine.

The next wine we sampled was Formaglini Vineyards Pinot Noir, La Quercia Block, 2012, a big, rich, lush wine which was the inaugural vintage for Formaglini. 2012 was an amazing wine year in Oregon. David’s vineyard produced 100 cases of wine in 2012 and sold out in 90 days. The bright garnet color in our glass led us to great olfactory senses of plum, black currant, spicy herbs and earthiness. The taste is round and silky with flavors of berry compote and herbs. The finish is long and elegant. It sells for around $42 per bottle. I found David de Lancellotti to be a humble vineyard owner who calls himself a wine grower. He lets the soil do the work; planting of rye in between the rows is overturned and adds to the richness of his five acres on Chehalem Mountain in the Willamette Valley. He likes the fruit to tell the story and not be covered up with oak flavor. David told us he has used only Biodynamic and organic techniques since its planting in 2007.  Grapes are planted by the Biodynamic calendar, and pointed out that wine tastes differently depending on what is the Biodynamic sign of the moon. Those days deemed “fruit days” reward the wine drinker with a better taste than on “leaf days.”  David was first introduced to Biodynamics from Italian winegrowing friends and became involved in following this method of growing. 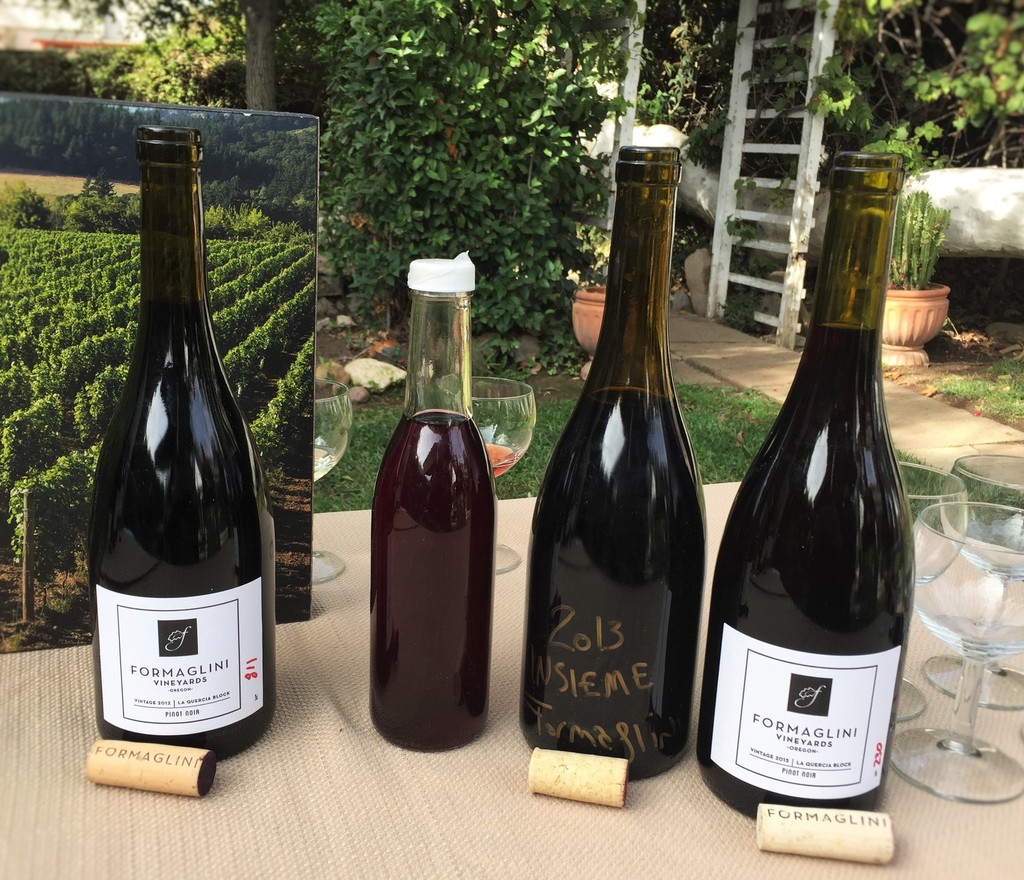 Our next tasting was a barrel sample of the Formaglini Vineyards Pinot Noir, La Quercia Block, 2014. David is very excited about this year. The wine is much cleaner with very little sulfur and very little yeast because it hasn’t been prepared in the cross flow process (without chemicals) It will be 18 months in the barrel before it is bottled and will be released in the fall of 2016. David described this wine as a very feminine wine, delicate and full of black fruit flavor and notes of bright cherry and raspberry. Perfection is what David wants from his wines, as shown by the fact that he dumped two barrels that were a little “bready” rather than blending them with the other eight barrels.

To enhance our wine tasting event, Anya prepared trays of fruits, nuts and cheeses, including a delicious triple crème cheese that David had transported from Paris just 24 hours before our visit. What a treat! 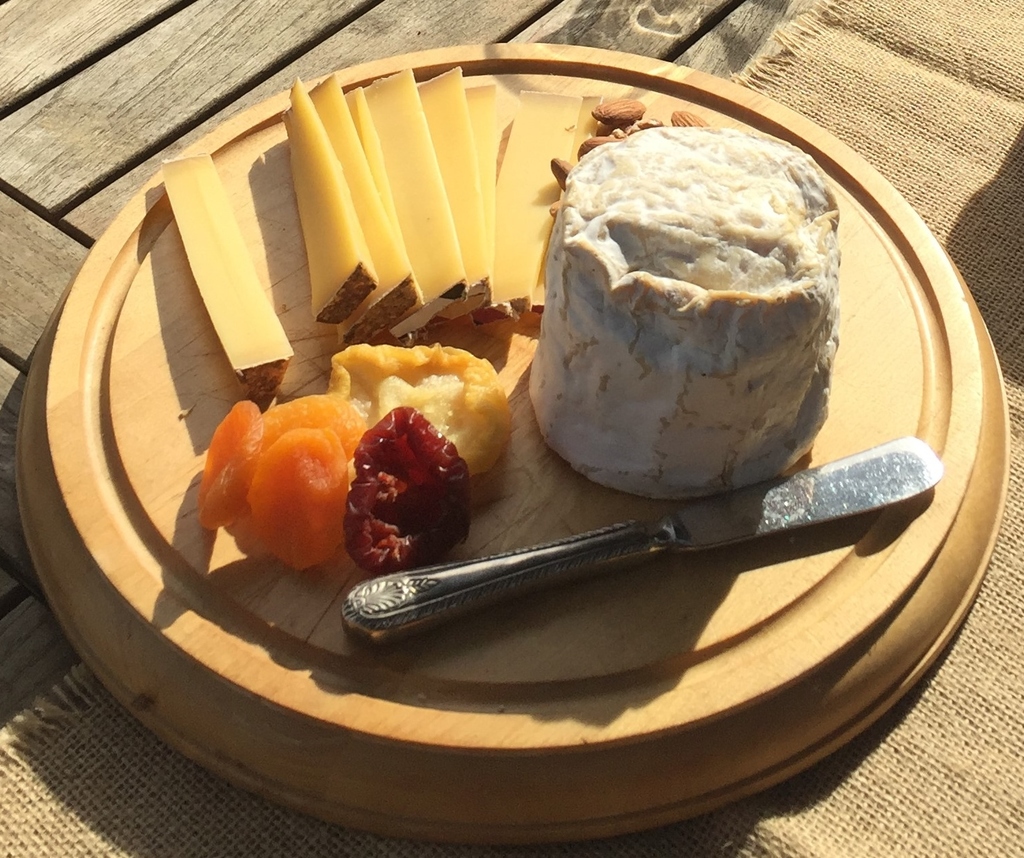 Next David poured us another barrel tasting of Formaglini Vineyards Insieme Cuvee, La Quercia and Verrazano Blocks, 2013. This unique blend is 25% Lagrein and 75% Pinot Noir. It is smooth and elegant and pairs well with chocolate. There are only 40 cases left of this fantastic blend so you will need to order this online as soon as possible.

Lastly, we sampled Formaglini Vineyards Pinot Noir, La Quercia Block, 2013, a beautiful ruby-purple, Rainier cherry-colored wine. The nose is of black cherry with strawberries, rose petals and Marionberries. It has a long finish of herbs and spice as well as cherry pie with a great balance. You can buy it now for $45 per bottle. 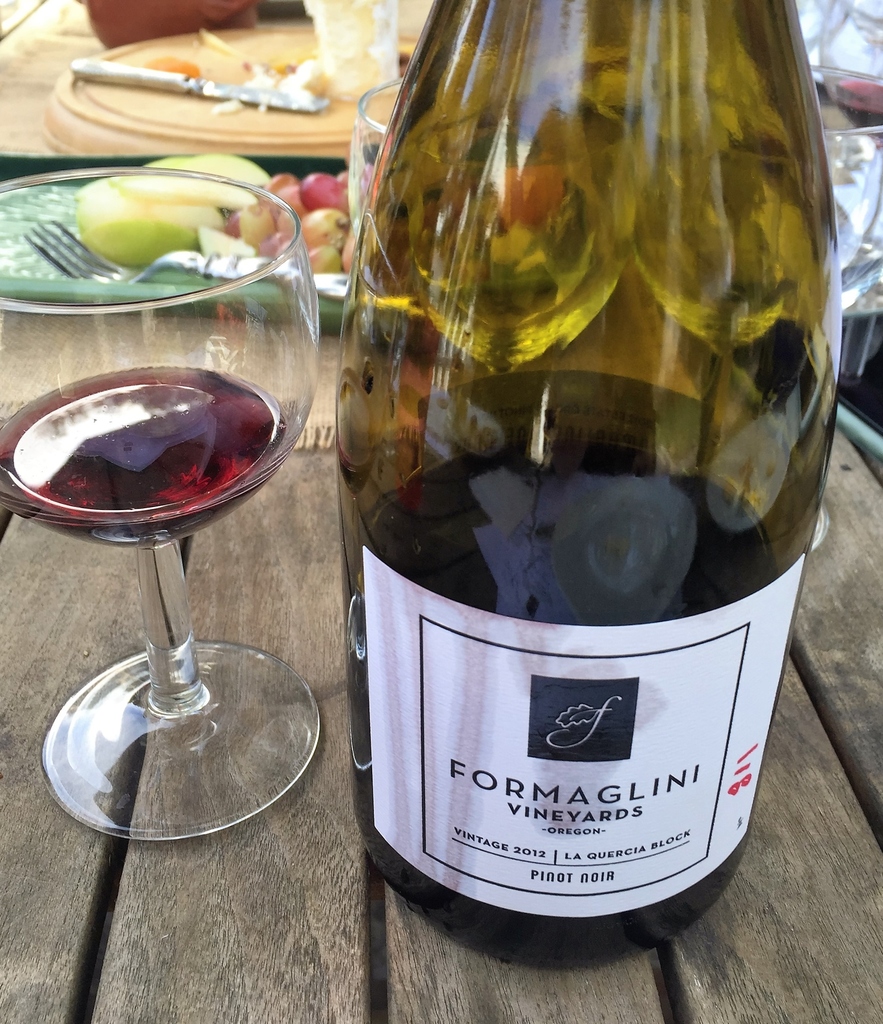 All Formaglini wines are hand numbered and tell a story. David points out that farming is like playing craps because each year is different. He chose a vineyard in Oregon because it reminds him of his favorite Italian wine-growing region of Friuli, northeast of Venice. Formaglini wines speak “Oregon” Pinot Noir but intermingles the Old World style from de Lancellotti’s roots.

For more information about these distinctive and charming wines, go to http://formaglinivineyards.com.