“You want me to get on that and go down where?” I gasped high atop the Alberta Falls waterslide, looking down to an alleged pool that was well out of visual range.  My 11-year-old granddaughter nodded with a look of both consternation and resignation that I tried very hard to take in stride.

Such was my introduction to a vast array of fantastic activities for kids that mesmerized the 70-year-old kid in me as much as they did Dalya, 14, and Mollie, 11, as we frolicked through Great Wolf Lodge in Williamsburg, Virginia (one of 18 Great Wolf waterpark resorts across the USA).

Of course, the area's main attraction is Colonial Williamsburg, the meticulously restored and staffed theme park based on Virginia's first capital, with buildings dating back to the 16th century, and there's also a more conventional theme park, Busch Gardens.But we could have easily spent all our three days here at Great Wolf Lodge and still not exhausted its aquatic options - certainly Mollie and Dalya wouldn't have minded at all. 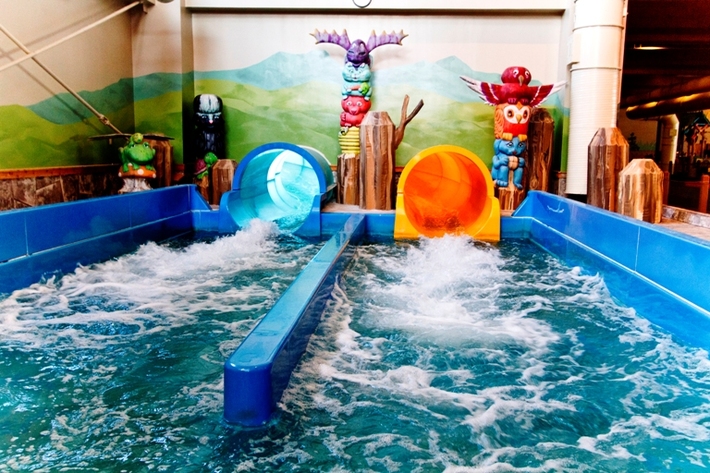 In fact, there's so much going on at this waterpark that I didn’t know where to look. The pool basketball game; the lazy river; the wave pool; the kiddie pool; Fort Mackenzie, a 12-level interactive treehouse with a section of ascending inter-connected rope tunnels leading to two winding slides; a surf stimulator; and of course a total of eight waterslides which dominate the park, both inside and outside the building.

And everywhere the smiles were as wide as the lazy river was long. And no matter what the activity, you’re never too far from a potential dousing from overhead buckets both large and small eliciting cries of surprise and delight from bathers of every age. 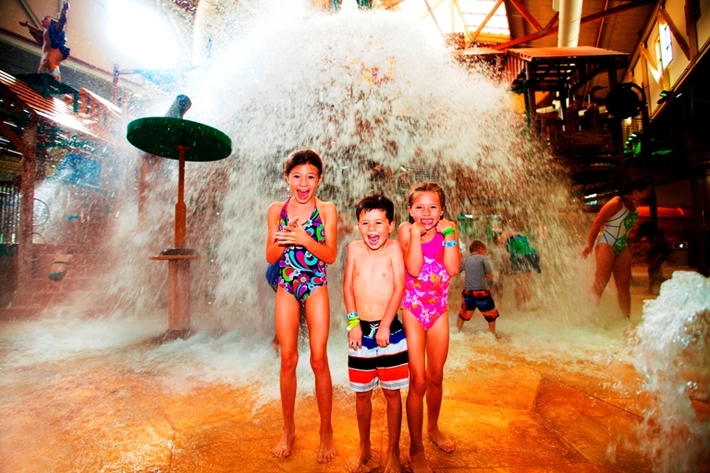 Options ranged from the toddler pool announcing depths starting at 0’ and containing miniature water buckets and slides to an array of adult slides, from family raft rides of gentle descent to the terror-inducing Howlin’ Tornado with sheer drops and challenging turns. Okay, we didn’t go near that one but yes, we returned to the Alberta Falls waterslide multiple times.

And then there was the wave pool. Okay, it doesn't exactly offer ocean-worthy diving, but if you’re under three feet or willing, as I was, to kneel down, you can simulate riding the waves even if you can’t exactly dive into them. Once our skins unpruned, we were ready for more land-based adventures -- and there were as many of those as there were waterpark options. But first we had to eat -- and so we entered the dinner buffet, right off the lobby where continuous other activities unfold.  When I went for my salad, there was dancing in the lobby; back for my entrée, 50 little kids were engrossed in story time; during dessert, a musical presentation enthralled with singing trees, animals and other fanciful creatures. Entertaining kids around the clock is what Great Wolf Lodge is all about. So it was a surprise to see so many adults sporting the wolf ears the kids get at check in. I resisted the temptation.

After the waterpark, Great Wolf Lodge's pièce de resistance is MagiQuest, a hard-to-describe adventure that takes kids throughout all four floors of the hotel seeking magical powers, potions and portents -- all enabled by their magic wands -- to satisfy the demands of a Merlin-like presence ensconced in a computer inside a tree. You don’t dare not follow his instructions!

There are multiple quests with multiple clues to each quest which require you to visit the Enchanted Forest, Tangled Woods, Piney Path and Whispery Woods, all located throughout the hotel. “The Ancient Book of Wisdom,” which you get when you sign up for MagiQuest, directs you to the clues. It’s a good thing I was with Dalya and Mollie: I never could have figured out what to do. 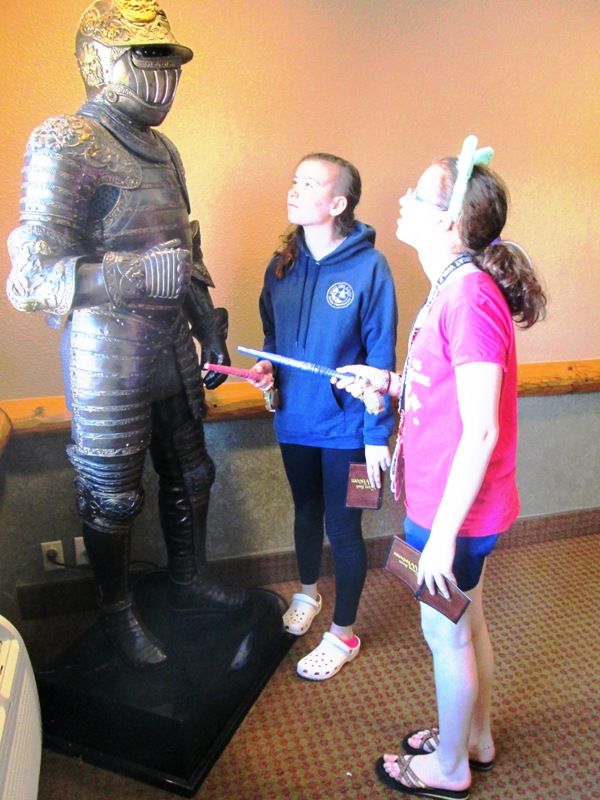 Surprising encounters occur throughout. Let’s say you wand a Quest site that’s not on your list, you might hear: “Silly Magi, you have to be on this quest before I waste my time with you.” At the Book of Freezing Spells, a voice admonishes: “Don’t be so literal. You’re reading way too much into this.” And the huge larger-than-lifesize knight in a stairwell (above) pleads: “You have found 200 pieces of gold hidden in my armor. Now get me out of here!”

(A word of warning: You have to stay out of the way of younger kids racing around as if their wands were swords and the quests just an excuse to duel each other through the hallways.) And if you tire of this unusual game of dungeons and dragons, you can opt to play miniature golf at the Howl in One course; hang out at the arcade; play laser tag; tackle the outdoor ropes course (above); or get a henna tattoo and come back to the quest at a later time.

There was so much going on - so many bizarre places to wield a wand, so many big screens showing animated adventures spaced throughout - that I just gave up trying to understand what was happening and happily trailed behind my granddaughters in their quest for - well, other items in their quest.

Overheard from one frustrated mom with three little ones in tow: “Man, this is crazy, I give up.”  I knew just how she felt. I was so glad when Dalya finally pronounced that she only needed Tree Slime to finish her latest quest. To me that sounded like a good way to finish up. And yes, there were actually more quests to do -- the Shadow Quest and the Compass Quest – that I didn’t even want to ask about. And the list of the things we didn’t do was almost as long as those we did. We did not go to the Scoops Kid Spa (above), where the nail polish for mini-manicures all come with ice cream flavor names, the pedicures are done while seated in giant banana split thrones, the facials, bath balms and scrubs are either vanilla, chocolate or strawberry and the glitter make-up application comes with a tiara.

We also didn’t try the life-size time challenge game where you race both against the clock and your opponents to push out balloon-size blinking light buttons. We didn’t bowl at Ten Paw Alley with five pound balls and bumpers along the pint-size lanes. We didn’t attend any of the several 4D-movies offered at the Howly Wood Theater. We could have spent a week there and never gotten bored, but hey, Williamsburg and Busch Gardens beckoned - more for next visit!