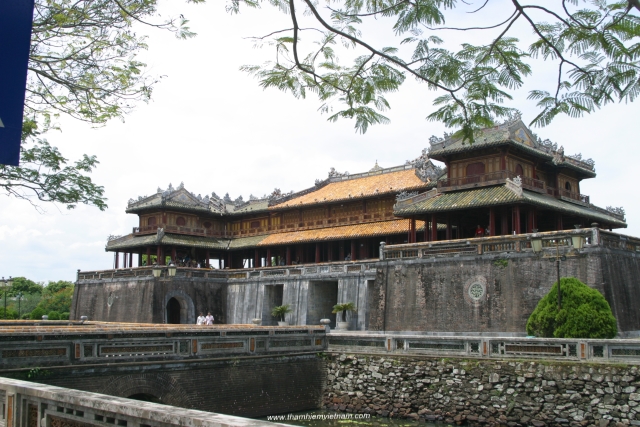 Hue Citadel is situated on the Northern bank of the Perfume River. 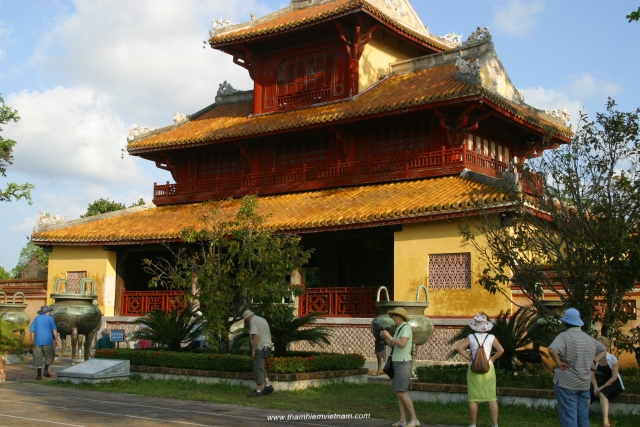 Characteristic: With an area of 500ha and a system of three circles of ramparts, namely from outside to inside: Kinh Thanh Hue (Hue Capital Citadel), Hoang Thanh (Royal Citadel) and Tu Cam Thanh (Forbidden Citadel). Hue has chosen to be the capital city of the Southern Kingdom by all Lords Nguyen and officially became the capital under Tay Son Dynasty. For approximately 400 years, Hue has become a great landscape and architectural site. Hue royal complex has been officially recognized by the UNESCO as a World Heritage Site.
This construction stared in 1805 under the reign of Emperor Gia Long and completed in 1832 under the reign of Emperor Ming Mang. Under Nguyen Dynasty, the Kings had ordered to build ramparts, palaces and constructional works for royal. Over 200 years to now, it is still original with nearly 140 small and large constructions.
The Citadel, square in shape, is almost 10km in circumference, 6m high, 21m thick and 10 entrances. On the top of the walls that surround it, 24 bastions are established for defensive purposes. Besides, the Citadel has an ancillary gate connecting the Tran Binh Bastion called the Thai Binh Mon (Peace Gate).

We are travel company and office based in Hue city, we provide full travel services, local guides in Hue and special with car rental Hue (use with local licensed drivers)