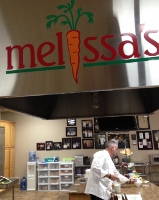 "A Celebration of Spring"

Have you ever wondered where all those new vegetables and fruits come from that you see in your grocery store such as Dragon Fruit, Cactus Pears, Limequats, Quince, and Purple Asparagus?  This is something about which I often wonder, and I was going to get that information along with fellow IFWTWA (International Food, Wine, Travel Writers

Association) members by taking a tour of Melissa’s /World Variety Produce at 5325 Soto St. in Vernon (the southeastern part of Los Angeles.

Awestruck would be the best word to describe me when I first saw Melissa’s Produce. I expected a small produce stand full of unusual fruits and vegetables and what my eyes witnessed was a 280,000 square foot warehouse. Later we were told 10,001+ employees work for Melissa’s, and that it is the largest distributor of specialty produce in the U.S. It imports and distributes exotic fruits and veggies from around the globe. At any one time, Melissa’s has 1,000 specialty items available and specializes in Latin and Asian produce. In addition, Melissa’s is a certified organic produce distributor. All this came from Joe and Sharon Hernandez starting the company in 1984 in a produce warehouse lunchroom.

When we arrived, we were greeted by Robert Schueller, Director of Public Relations, and were taken to the test kitchen and meeting room. Today’s emphasis was to be on fresh and colorful spring produce.

Displayed on the first table we witnessed was kale of every variety and color. We 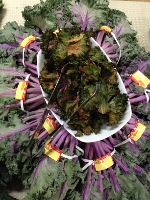 saw the green kale we often see in our grocery as well as a darker kale called Tuscan or Black Kale and Kale Sprouts that looked like purplish-green flowerets. Melissa’s was the first to market the Kale Sprouts. In addition, on the table were three very large bowls full of kale chips (easily prepared by tossing chopped kale or the Kale Sprouts with olive oil and seasoning and then roasted). We did a taste test and could tell a difference in the sharpness of a couple of batches and more of a chewy texture in one batch.

Next we saw artichokes. But, these were not ordinary artichokes. Each was wrapped in a plastic with a plastic pop-up timer on the bottom (much like you see on some turkeys) to let you know when the artichoke was done cooking in your microwave. We learned that 99% of artichokes that are grown commercially come from California. Artichokes are actually a thistle flower and not a vegetable. As well as the wrapped large artichokes, baby artichokes were displayed on the table. We were told the baby artichokes contain no chokes.

Next item in our spring vegetable exploration was the leek. Much to our surprise, we were told that leeks are not part of the onion family and are very different than onions. Atop the leek table were two main varieties of this vegetable, the standard leek and the Belgian style of leek. The Belgian-style leeks are mainly white (the only edible part of a leek).  This variety will eliminate the more common variety in the next 10 years.

To properly clean a leek (because often they are very sandy and they layers are tightly connected), you should wash the exterior of the leek and then cut off the root and top, then chop it, and rewash it thoroughly. Luckily for us, Melissa’s employees Chef Tom Faker who studied at Le Cordon Bleu and now manages Melissa’s Corporate Kitchen. He prepared for us an eye-appealing appetizer with a base for a bruschetta of gold beets and then topped with avocado pieces, slivered leek, and kumquat slices. Beautiful and delicious with a creaminess as well as a tartness in flavor. What a nice spring appetizer this makes!

There is nothing more spring than Fava Beans. Fava Beans come in a shell

that must be unzipped like a pea. However, these goodies are labor intensive. Once the bean is removed from the shell, you must blanch the bean and then take off the outside husk.  It is a two-step process. Luckily for all of us who want to enjoy fava beans but don’t want to do all that work, A healthy and tempting salad of arugula, parsnips, fava beans, and shrimp on a small skewer awaited us to sample the complexity of flavors this dish contained. My mouth exploded with flavors that were sweet, bitter, creamy, and salty all at once. On top of that, the texture and color added to my enjoyment.

Beets awaited us on part of the next table. Beets come in six major varieties. The gold beets are more difficult to find than the red variety. Chef Tom cut a new variety in half for us to witness the striped coloring of the Baby Candy Cane Beets. For ease of preparation, foil wrap the beets with a little moisture and bake at 400 degrees for an hour. Then you can easily peel the skin (but be sure to wear gloves unless you want red hands). 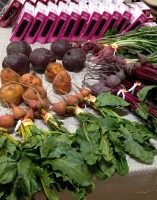 Beets come in a similar vacuum-sealed bag like the fava beans to provide ease of preparation if you don’t want to take the time to cook them. (I was curious about preservatives in these packaged products because the package has a very long refrigeration life but was happy to see no preservatives or additives and many are marked with non-GMO on the box).

Parsnips join the rest of what is fresh for spring that we were going to taste. We learned that sautéing them brings out the sweetness and that the smaller ones are the best. After being inspired by Chef Tom, I recently boiled parsnips along with potatoes, mashed them and added butter, chives, and some white truffle oil. Delicious! Rhubarb tops my list of spring produce, and I was to learn of an excellent and easy way to prepare it.  We were told that if we removed both ends of the stalk, chopped it into 1-2 inch pieces and then placed it in a non-stick pan and stirred it, rhubarb would actually melt down to a soft spread to be used on toast or ice cream. Be sure to add lots of sugar because rhubarb will make you pucker otherwise!

Look for one of the newer items of produce in your store called Ojai Pixie Tangerines. As the name implies, these tangerines are grown in the valleys along the mountain ranges in Ojai. Because the mountain range runs east to west in that area, these tangerines receive sunlight all day. This seedless, easyto-peel, juicy fruit can be found from March through June at your grocery. Chef Tom passed around a plate of delicious muffins full of rhubarb and tangerines and topped with a creamy tangerine icing with a slice of the tangerine atop the muffin. These two spring fruits offer a wealth of ways to enjoy them as well as great nutritional benefits. 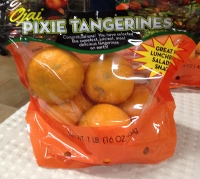 Once I was loaded down with fresh produce and had vowed I would make an effort to eat healthier, I headed home to check out Melissa’s/World Variety Produce online. I invite

you to look up all the ideas for using produce on this website at www.Melissas.com and tab to the menu section which is my favorite area full of ideas grouped by the month and then by holidays. With this kind of inspiration, we should all be eating more nutritiously and enjoying each bite.