From Beaches to Blackbeard, Shipwrecks to Sand Dunes, North Carolina’s Outer Banks Have Something for Everyone I stood frozen with fear, unable to move. The terrifying image drew closer, curved sword swinging wildly. Just as the fearsome swashbuckler seemed about to separate my head and body, I snapped back to reality; left my all-too-real daydream about Blackbeard the pirate behind; and moved on the next exhibit in the museum.

The dramatic, somewhat grisly story of Blackbeard is but one display that transforms The Graveyard of the Atlantic Museum in Hatteras into a memorably lifelike experience. This eclectic collection is among the attractions which make North Carolina's Outer Banks – the chain of narrow barrier islands that parallels the state’s Atlantic coastline – into much more than just another sun-and-sand vacation destination.

No wonder Forbes last year included it among The Top 20 Places Americans Are Dreaming About Right Now, and a renowned seashore expert included one of its beaches among his list of the most outstanding in the country.

Another draw is how the these islands' past comingles with life there today. Tiny family cemeteries stretching back generations are hidden behind houses - some of which contain timbers salvaged from the hundreds of ships that fell prey over centuries to the treacherous waters off this coast.

The Outer Banks first became a magnet for vacationers all the way back in the 1830s, when families of wealthy North Carolina planters found refuge here from the summer heat. They were followed by sportsmen drawn by outstanding fishing and hunting that First Nations peoples had discovered centuries earlier. 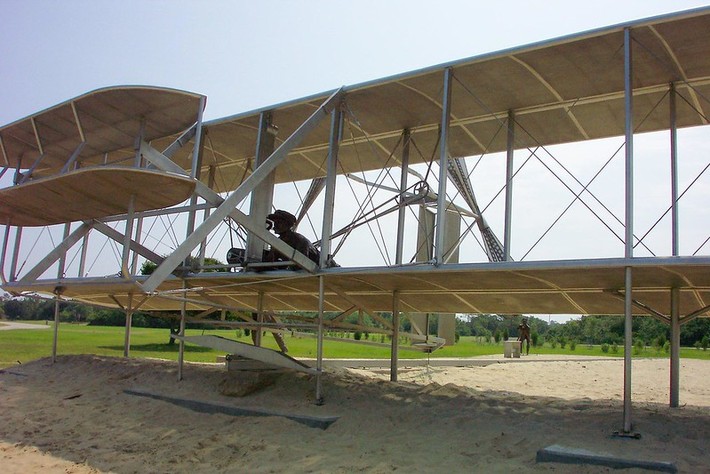 The pristine strands strung out along the 130 miles of the Outer Banks are of course the major appeal for most visitors. The Cape Hatteras National Seashore runs for 70 of those 130 miles, including the largest stretch of undeveloped beaches on the U.S. East Coast. - including the eastern seaboard's tallest sand dune (fluctuating in height between 80 and 100 feet, constantly reshaped by the wind) at nearby Jockeys Ridge State Park.

Nestled between these stretches of sand are tiny villages, each with its own distinctive characteristics. Many visitors rank the northernmost towns Corolla (pronounced coh-RAH-luh) and Duck as the Outer Banks'  two prettiest - the latter with a wooden boardwalk that skirts a bay, leading through pockets of woods where bird calls are the only sounds. The islands' commercial hub,  meanwhile  is comprised of Kitty Hawk, Kill Devil Hills, and Nags Head, with more of a strip-mall atmosphere. And it was at Kitty Hawk where on December 17, 1903 Wilbur and Orville Wright made the first controlled power flights. The Kitty Hawl National Memorial has a musuem with a full-scale replica of their rickety aircraft (above) along with various exhibits and memorabilia; visitors often are surprised to learn that the Wright Brothers' longest journey lasted only 59 seconds and covered just 852 feet. Roanoke Island became the site of the first English colony in the Americas in 1657, and a good place to begin your exploration is Roanoke Island Festival Park (above), where the life of Native Americans who originally inhabited the area is recreated.  Longhouses, a dance circle, and planting and harvesting areas set the mood. Interactive exhibits appeal to generations of family visitors.

To relive another chapter of the story, clamber aboard the Elizabeth II, a sailing ship representative of seven British vessels that arrived during the 16th century.  Costumed interpreters describe the small craft, and entertain landlubbers with dramatic tales of the perilous voyage, speaking in a thick brogue that echoes the dialect of that time. An Elizabeth II interpreter spins tales for guests aboard the ship. Victor Block

The history lesson continues at the Roanoke Adventure Museum, where 400 years of Outer Banks past are explored. From early pirates to the Civil War, from boat-building to shipwrecks, virtually every facet of life as it used to be gets its due.

In Hatteras Village, the aptly named Graveyard of the Atlantic Museum is chock full of dramatic exhibits which chronicle the tragic tale of more than 2,000 ships that met their fate on the treacherous offshore shoals. Many were sailing vessels that went down during the 18th and 19th centuries. A reminder that thousands of sunken ships lie below the waters off the Outer Banks of North Carolina,  Outer Banks Visitors Bureau

Others were cargo carriers heading for England during World War II, which were sunk by German submarines that lurked surprisingly close to our country’s East Coast. Parts of several shipwrecks still are visible today along beaches or in shallow water at low tide.

Among other vivid exhibits at the museum are displays about the Civil War ironclad U.S.S. Monitor, ship bombing demonstrations by General Billy Mitchell off the Cape Hatteras coast in 1921, and lifesaving and rescue operations. Of course, there’s a section devoted to the notorious Blackbeard who, after his life of marauding, was killed in the area.

Lighthouse buffs will think they’ve gone to heaven, with three towers that mark this stretch of the Outer Banks, all of which were first lit in the 1870s. The Cape Hatteras light claims fame as the tallest brick beacon in the country.

Adding to this historical and cultural mélange is a list of other pursuits that offer something-for-everyone variety. They range from hiking to hang gliding, kayaking to kite boarding, sailing to surf boarding, along with fishing and crabbing. Oh yes, and one of my favorite beach pastimes: relaxing on some of the finest sand anywhere with a good book.

For more information about visiting the Outer Banks, call 877-629-4386 or log onto OuterBanks.org.