My family lived in Japan for three years while my husband served aboard the USS Kitty Hawk out of Yokosuka, Japan. During those three years we lived on the economy in Mabori Kaigan for some time. It gave us a unique opportunity to view and take part of the local Japanese culture. One of the most interesting traditions is on New Year’s Day. 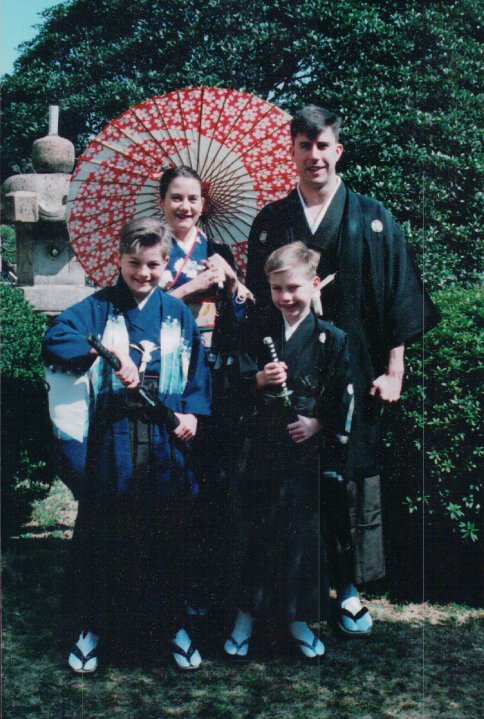 Before 1873 the Japanese New Year was based on the Chinese lunar calendar but following the Meiji Restoration Japan adopted the Gregorian calendar and it is now celebrated on January 1st. It is considered by most Japanese to be one of the most important of the annual festivals and over the centuries has developed its own unique set of customs. The traditional Japanese way to spend New Year’s Day would be to visit a temple or shrine.

But that is not the beginning of Oshogatsu. In the days leading up to New Year’s Eve, osoji (cleaning), the Japanese equivalent of “spring cleaning” begins. The Japanese believe this is a good time to purify your environment to begin the New Year fresh and new. This takes a physical as well as metaphorical meaning as clouds of dust go up from everyone’s front door as the homes are being prepared to begin the New Year. Once the house is clean the cooking then ensues. On New Year’s Eve Soba noodles are served in the houses and temples across the country. The traditional New Year’s fare or osechi-ryori consists of boiled seaweed, fish cakes, mashed sweet potato with chestnut, simmered burdock rood and sweetened black soybeans. Ozoni is another popular dish which is a mochi or rice cake based soup. Mochi are traditional rice cakes made with boiled sticky rice which has been mashed to form a sticky white dumpling. In modern times sushi and sashimi are often part of the menu and on the seventh day of January a seven herb rice soup known as nanakusa-gayu is served to allow the stomach to rest. 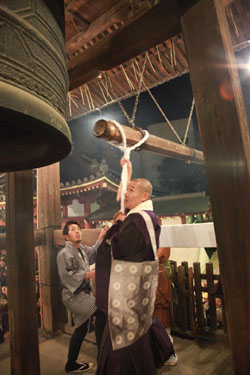 Beginning at the stroke of midnight on December 31st the temple priests ring the joya-no-kane or New Year’s Eve Bell a total of 108 times, a number that symbolizes the 108 bono (Buddhist sins such as greed and anger) as the sound of the bell is believed to get rid of them. Then for the first three days of the New Year the temples and shrines are abuzz with activity as locals pray for good luck in the coming year.

Rather than sending Christmas Cards, the Japanese send a flurry of postcards on New Year’s (called nengajo). The post office in Japan will guarantee delivery of these postcards on New Year’s Day if they have been postmarked during a specific time and they are marked with the word “nengajo”. The post office employs students part time to insure all deliveries are made on time and it gives the students some extra pocket money to begin the New Year with. It is customary not to send a postcard if one has had a death in the family the following year out of respect for the deceased.

Also on New Year’s Day Japanese people also have a custom of giving money to children, a tradition known as otoshidama. The money is handed out in small decorated envelopes. This tradition began in the Edo period when large stores and wealthy families gave out a small bag of mochi as well as mandarin oranges to spread good luck and happiness all around and had continued into current society.

Hatsumode is the first temple or shrine visit of the year and is a very important tradition for a Japanese family. At the Shinto shrines people arrive from midnight through the following day to express gratitude for the blessings of the past and to pray for guidance and protections for the New Year. Priests bless visitors with beautiful white paper streamers attached to wooden purification wands which are waved over the visitors for blessing and purification. They also receive a small piece of wood wrapped in paper with the name of God (akami) written on it. This is then placed over the visitor’s door either at their home or office.

Beginning at the stroke of midnight on December 31st the Buddhist temple priests ring the joya-no-kane or New Year’s Eve Bell a total of 108 times, a number that symbolizes the 108 bono (Buddhist sins such as greed and anger) because the sound of the bell is believed to get rid of them. Then for the first three days of the New Year the temples and shrines are abuzz with activity as locals pray for good luck in the coming year.

Crowds are a part of any tradition in Japan so if you plan to go to any of these shrines or temples a good dose of patience is in order. Arrive early for good positioning but be prepared to face large but jovial crowds as the New Year begins. Make your reservations well in advance and make sure you prepare accordingly. Many local businesses and shops will be closed as people travel to visit their families so rates can be high. Also, make sure you carry plenty of cash because Japan is still very much a cash based society and ATMs tend to run out of money as banks are closed for the whole New Year period. So, plan early and plan well but do plan to attend Oshogatsu at least once in your life!