Part 3: Coconut & Poyo Paradise
Back to Waterloo, I was feeling much more comfortable with my surroundings. I bought a fresh coconut from 2 children who had a barrel full and which they opened with a machete, and walked to the taxi park near the market to which I had already been to before. I grabbed the first taxi to Tombo, the biggest fishing village on the peninsula, and immediately jumped on the back of an 'Okada' direction Bureh Beach of which I had heard a lot of good things. 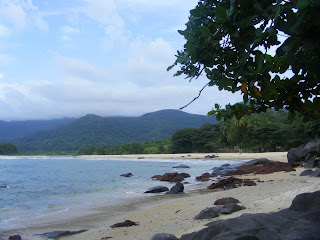 Bureh Beach
My mission this time was to visit as many communities along the peninsula as I could whilst walking the length of the beach. So, I walked through Bureh Town down to the beach. There I met a few local guys who called themselves 'Beach Boys' and who looked after the accommodation. The day had been long, so I decided to stay for the night. The sun was still up, there were some waves on which the locals were surfing, so naturally I grabbed a body-board and joined in the fun. 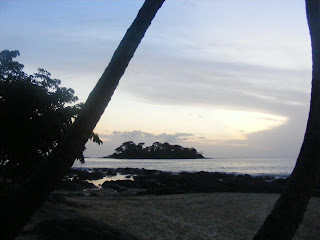 Maroon Island at Sunset
After dinner, with which I had the most amazing groundnut soup, I chatted to my new found friends and was then invited to their house to listen to some music and drink 'Poyo' (palm wine), which I readily accepted. Walking through the community, I could see myself living in a place like this: sitting around candlelit courtyards, sipping on palm wine whilst discussing the latest news. A slow pace of life which made me feel privileged to have been given the opportunity to experience it. 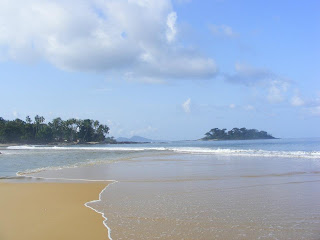 Bureh Beach & Maroon Island
That night I went for a walk on the moonlit beach. The waves were gently lapping against the shore and the outline of the tall and bent palm trees were distinct against the pure star filled sky. The shape of Maroon Island, so called because the first 'Maroons' (runaway slaves) landed there in the 1700's, was apparent in the distance. This idyllic scene seemed like a dream, probably emphasized by the Poyo, and I had to pinch myself a couple of times to make sure that it was indeed reality. This set the scene for my 2 day 'beach walk'. 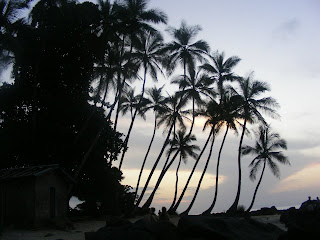 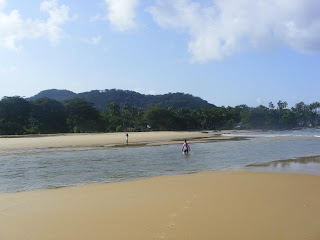 Waving Goodbye to my hosts
The next morning, I waved goodbye to my hosts and crossed a river - one of many flowing down from the forest covered mountain range into the Ocean - before heading off at a slow pace towards the next community. Along the way, I laid my backpack down and went for a swim in the translucent water. Feeling refreshed, I continued along my way following the magnificent coastline that stretched as far as the eye could see. After about an hour's walking, I reached the John Obey community (see part 1) where I said hello to the friends I had made and to check on the progress of the second earth bag dome, before I moved on to my next destination: Tokeh. 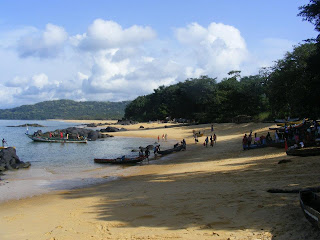 John Obey Community hauling the fishing boats onto the beach
I had heard that Tokeh was a fine producer of Poyo, so I decided to inquire as to who was the best Palm Wine seller in Town. I was told to ask for Katy at the bus station, and a little girl was ordered to show me the way. We walked through alleys bordered by mud walls covered in raffia and arrived in a small courtyard where men were drinking palm wine. When they saw me, they made me feel at home straight away and gave me a jar of Poyo to start off. I stayed there for about an hour and learnt a lot about Tokeh and the surrounding area. Finally, before departing, as I was going to meet a friend at my next destination, I bought a gallon of Poyo for the road and set off towards the beach. 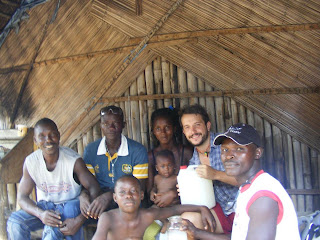 Friends made at Katy's Place in Tokeh
There I met some fishermen who offered to take me to some 'twin' islands which I had noticed in the distance, for a nominal fee of course. I decided to accept the offer and jumped into the dugout canoe along with my bag. I had not realised how unstable the boat was and thought we were going to capsize a few times. Finally we arrived on the islands and my guide waited at the boat for me. I could see that a storm was coming, so I quickly walked around the island and got back to the canoe just in case. I felt like I was on a treasure Island, and who knows, maybe I was. 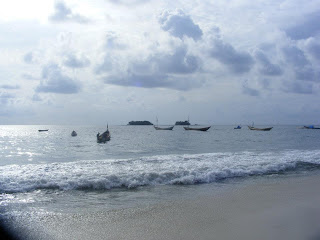 The 'Twin Islands' in the distance 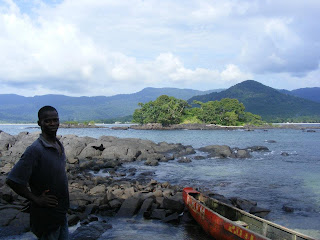 Looking back from the Islands with my guide, Mohammed 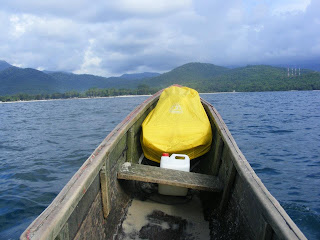 On the way back to mainland
When I reached the beach, I grabbed my bag, paid my guide, and then went on my way along the beach towards River #2, singing a song to myself about Palm Wine drinking Pirates.
River #2 is a pioneer in community based tourism. The guest houses available to day trippers or seasonal domestic tourists are owned by the community, and each member of the community contributes to the project. The activities, accommodation, food, reception, transport, are all provided by the community, and therefore the money goes back to the community itself. It seems to work well and is well organised. 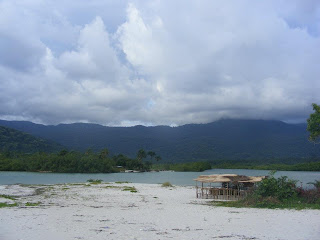 River #2 Lagoon
After a grueling walk of about an hour and half, I reached the last river I needed to cross before I reached my destination. Just as I got there, a canoe pulled up carrying others across. The timing was perfect. When I stepped off the boat, I was greeted by Ishmael, Daniel's (my friend) little cousin, who had been expecting me. He guided me to my beach hut, where I would be staying the night. I then had a well-deserved swim. 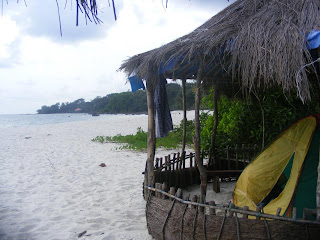 My accommodation at River #2
I was then brought a bowl of rice and fish covered in a very spicy ‘hot pepper sauce’ as well as two freshly picked coconuts. This was going to be my last dinner before I left paradise so I appreciated every mouthful of ‘chop’ and every sip of fresh coconut milk whilst staring at the clear horizon whilst the sun was setting. The coconut milk was probably the best I had ever tasted.
That night, my hosts decided to build a bonfire around which we sat to talk about their stories and my experiences in Sierra Leone. I was told many stories about the civil war which I will not recount here because I feel they are too graphic to share within this blog, but I must say that I realised how awful the whole situation was. You can see a film like ‘blood diamond’ a million times, but will never get even close to understanding what the local communities went through until you hear the stories from the mouths of those who were on the ‘front line’.
We talked well in to the night, the moon shining down onto the Ocean gently caressing the golden sands of River #2. 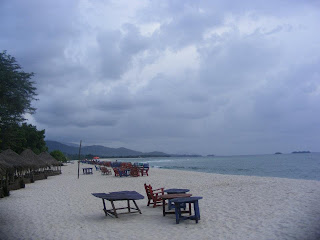 River #2 Community Based Tourism project
The next morning I awoke to the resident cockerel pecking away at the half coconuts left over from the night before. I opened my tent’s door to a blazing sun and went straight to the sea for an early morning swim. The fire’s remains were still smoking. Daniel brought breakfast and we drank our coffee speaking about the days plan. I was to meet up with my contacts at the National Tourism Board so that they could show me more of the peninsula and the potential that it has for the development of responsible tourism.
After having had a refreshing bucket shower, and having packed up my rucksack, we walked to the top of the dirt road and hailed down a heavy duty truck on which we jumped and rode back to Tokeh where we were to meet Umaru Woody and his colleagues of the National Tourism Board.
To be continued… ‘The great potential for responsible tourism in Sierra Leone’
Responsible tourism can be practiced in a variety of ways as long as it benefits the local communities in which you spend time, whilst respecting the local heritage. One of the ways to do so is to meet with the local communities, share stories, accept invitations, be curious but respectful, be friendly and humble, and make sure that the money you spend is shared amongst the most people possible. You can buy local drinks (like Poyo), participate in activities organised by the local communities, stay in local accommodation and make sure you know where the money goes, how it is shared. By doing so, you will get to know the people with whom you stay, the places you visit more intimately and have an overall more authentic and satisfying experience.
For more of Part 3, click here; for Part 1 click here; for Part 2 click here.
To discover more of the authentic experiences you can have in West Africa, don’t hesitate to visit www.westafricadiscovery.co.uk or join a growing community passionate about Travel in West Africa on Facebook.