In Costa Rica, Development, Dust, and an Iconic Tropical Paradise 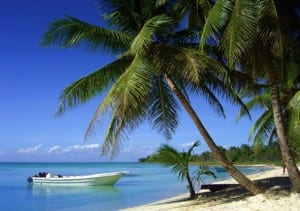 Santa Teresa on the Pacific coast is one of those iconic Costa Rica tourism spots. It's paradise found for so many international and Costa Rican visitors who have "discovered" Santa Teresa's pristine beaches, world-class surf breaks and lushly forested coastline. Yet as more and more travelers flock to experience these beautiful treasures, the isolation bubble stretches to the max, bringing with it the growing pains of any popular tourism destination.

The laid-back beach town sits near the southern tip of the Nicoya Peninsula is part of a stretch of coast which incorporates the beach communities of Mal Pais, Playa Carmen, Santa Teresa and Playa Hermosa. Once a surfers' and backpackers' secret hideaway, the popular beaches now are filled with eco-lodges, beach bungalows, upscale luxury boutique hotels, yoga retreats, and multi-national restaurants serving healthy cuisine. Actor Mel Gibson and model Gisele Bündchen own homes in the area.

Only one road takes you there, and therein starts the growing pains. Traveling across the bottom of the Nicoya Peninsula from the Nicoya Gulf port of Paquera, when you get to Santa Teresa there is a crossroads. To the left stretches sleepy Mal Pais. To the right, on a long, narrow ribbon of road is Playa Carmen, Santa Teresa and Playa 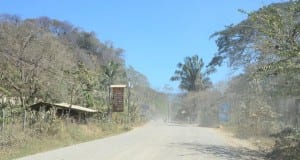 Hermosa. The road ends just past there at Playa Manzanillo. For the last five miles before Santa Teresa, and throughout the entire community, the road is unpaved dirt. With the increase in traffic from new residents and tourism, in the dry season, the dust is unbearable; in the rainy season, it is a muddy pot-holed mess.

Paving or not paving the road – which is a local government responsibility – has been a controversy for years, with sides both for and against. Not long ago, the local municipality started preparatory work for paving a three-mile section in Santa Teresa, with plans for another four-mile section to be done later.

"Maybe some people want to keep the road unpaved, because they want a really remote area," commented Mario Matarrita, manager at Pranamar Oceanfront Villas & Yoga Retreat in Santa Teresa. "But there is a lot of dust right now, and large potholes. We need the road paved to control that. There are many respiratory infections and health problems here. There is really nothing good about this road."

Matarrita, an avid surfer who moved to Santa Teresa 12 years ago from San Jose, said that part of the road problem comes from lack of governmental support and funding. The issue is the registered voter base. In reality, several thousand people live in the Mal Pais-Santa Teresa area, but on paper, official population figures based on registered voters show a fraction of those residents. The community mixes both foreigners and Costa Ricans, but many national residents come from other areas of the country and never changed their voter registration. Since the provincial government is located in Puntarenas, far away across the Nicoya Gulf, when it comes time to divide up allocated funds, money usually goes to where their records show are the more heavily populated towns. 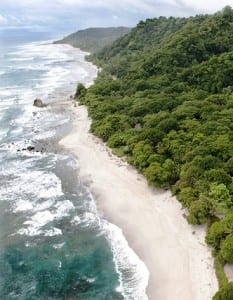 Those who are against the road paving fear over-development – a common growth consequence. However, Matarrita says that Santa Teresa's geography and the town's building cap at ten meters high will prevent the high-rise buildings so popular now at other beach resort locations. "Santa Teresa will never be that big because the mountains and ocean won't allow it," he said. "We're just a narrow strip of land along the beach with large coastal mountains behind us."

Pranamar Villas special events manager Larissa Chevalier adds praise to the enforcement of the maritime concession law in Santa Teresa. The nationwide law prohibits permanent structures on any beach within 50 meters of the high tide line. "You can walk down the beach in Santa Teresa and you don't see any hotels or bars or any development right on the beach. You can look through the trees and see buildings, but nothing right on the beach. It leaves the beach pristine," said Chevalier.

Low fresh water supply also has been an issue in the community, but Matarrita said the Costa Rican water company (AYA) should finish within a year a large water spring and reservoir project that will help solve the difficulty.

"We've got issues with the road, water, crime – just like any growing area. At the same time, there are positives with development, like recycling, beach clean ups, etc." said Chevalier, who moved to Santa Teresa years ago from Canada.

The tourism board in Santa Teresa and Mal Pais actively promotes many projects, remarked Matarrita. One of their main focuses now is improving public beach access, he said. Many of the hotels contribute to regular beach cleaning, and environmental groups are forming in the area. 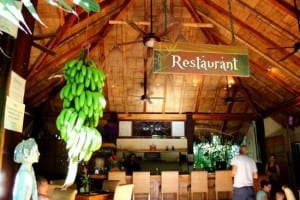 Chevalier touted that tourism and development has created jobs and a thriving economy in the community. At the same time, she says Santa Teresa is still small enough so there is a good sense of community. "We have a really nice small town feel here; people wave to you and smile," Chevalier praised. "We have a multi-cultural community, and that makes for some amazing restaurants and tourism businesses here.

"Santa Teresa still has something special and untouched, and at the end of the day, I'm still happy to live here," she said. "I live in one of the most amazing places on the planet." 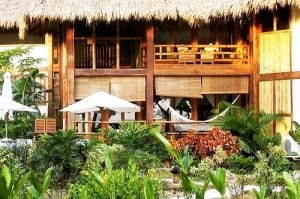 Where to Stay in Santa Teresa

How to get to Santa Teresa

You can get to Santa Teresa either by ferry from the Pacific port of Puntarenas (90 min.) landing at Paquera; then drive 75-90 minutes, with all but the last 5-mile stretch paved. Or take a 25-minute domestic flight from San José to Tambor on either Nature Air or Sansa Airlines; Santa Teresa is approximately a 50-minute drive from the Tambor airport. In good weather, taxi boats from the Central Pacific beach town of Jacó travel to Montezuma at the tip of the Nicoya Peninsula; from there it is a 40-minute drive to Santa Teresa.