Some of England's Coziest Coastal Pubs

Going to the pub is one of the pleasures of a visit to the English seaside. Whether you have been for a bracing walk along the seafront with a fierce souwesterly hurling seaspray across your path, or have spent a pleasant interlude pottering around a harbourside, dodging the waves crashing over the harbour wall, there's nothing like heading to a cosy pub for a cold one, the heady aroma of hearty pub food and a clutch of local characters of varying degrees of eccentricity putting the world to rights. These are some of my personal favourites.

Penzance is my home town, so I had to include it in my list.  The oldest pub in Penzance is The Turks Head, situated in the town's most historic street.  The pub is entered via a small door in its white facade, and is on two levels, with the bar on the ground floor and extra tables for eating downstairs. The good pub fare on offer includes a range of excellent fish and seafood options. The pub dates from the 13th century and has seen its fair share of action over the years, including part of the building being burnt down during the Spanish invasion of the 16th century, and the activities of smugglers making use of the tunnel leading from the pub directly to the harbour.

Wandering through the impossibly picturesque streets of this Cornish fishing town you pass a series of increasingly inviting restaurants, cafes and pubs. Then, just when you think you've seen them all you come to the Blue Peter, right at the bottom corner of the village, overlooking the harbour. As well as a range of ales, ciders and wines, the pub offers meals and frequent live music. Be careful on the way out: the only exit from the pub is not through the door at the front, but via a substantial flight of stone steps to the side. I shudder to think of the accidents that must have taken place on those steps. 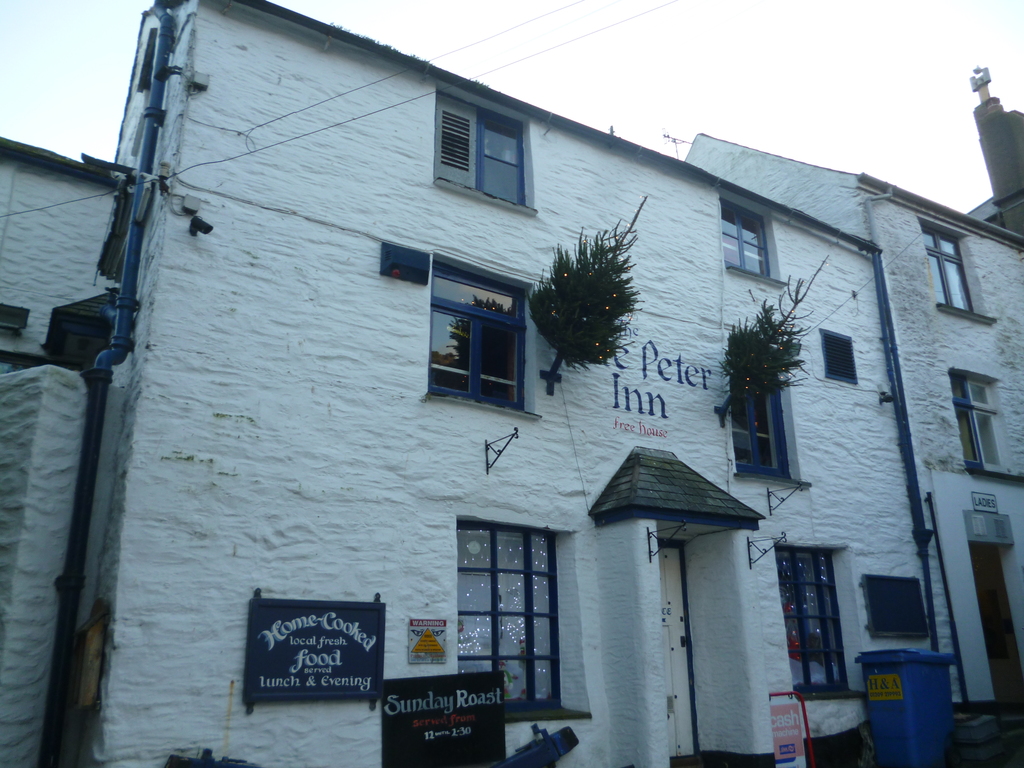 The Cherub is equally appealing outside and in, with its quaint black-and-white exterior and rickety interior with a roaring fire in winter. The building, the oldest in Dartmouth, dates from the 14th century and is thought to have been a Merchant's House originally. Upstairs, the restaurant does a nice line in fine dining, while lighter bar snacks are also available.

We stayed in Lymington a couple of years ago in the month of October, a time of year when I start to yearn for hearty, warming comfort food, ideally served in cosy candlelit surroundings with a lively, convivial atmosphere, and the Kings Head, at the top end of a quaint little street leading to the harbour and marina, delivered on all counts.

In a town full of quaint buildings, Ye Olde Cross Keys is one of the quaintest. Set slightly back from the seafront, the pub is perfectly placed to be dived into after a bracing walk along Aldeburgh's beach. Cosy and inviting inside, with a roaring log fire, the pub serves locally caught seafood washed down with Adnams ale. One evening during our stay in Aldeburgh we found ourselves sharing the bar with a large group of young musicians, not surprising in this town, which is famous for its musical connections, most notably its association with Benjamin Britten.

Ideally situated as a bolt hole after descending the steps from Whitby Abbey, the Duke Of York has a history stretching back 1,000 years to the days when the monks landed their produce from the sea at this spot before taking it up to the monastery. You can satisfy the inevitable hunger and thirst produced from walking up and down all those steps courtesy of the pub's decent standard pub fare and local ales, while enjoying fabulous views of the harbour.

I fell in love with the Olde Ship during two self-catering weeks in Seahouses, especially the main bar, which is stuffed full of nautical photographs and artefacts. Unfortunately, the pub's popularity proved to be its downfall on weekend nights, when the main bar could get uncomfortably crowded. During the summer there is a small garden out the back to retreat to.  I have not experienced the pub during the winter, but I'm sure it would be the perfect place to head for after pottering around the harbour or going for a long walk along the fabulous beach between Seahouses and Bamburgh. The Olde Ship also offers accommodation and serves meals in a separate restaurant area.

The Rising Sun ticks all the boxes for a traditional harbourside inn, although it is also an upmarket hotel, occupying a whole row of cottages in this prime location by the side of Lynmouth harbour. We once spent a lovely New Years Eve at the Rising Sun, culminating in a 60s singalong to the live musician in the main bar. The Sloop Inn in St Ives occupies a superb harbourfront location, nestling among the bars, restaurants, gift shops and amusement arcades. There is a range of delicious seafood specials on offer and in winter the hot drinks include mulled cider, a welcome change from the usual mulled wine.

Nice to see my piece featured, but it should be noted that I originally wrote it up in the depths of winter as a Christmas special, hence the emphasis on 'coziness'!