Having lived in India my entire life, in all those years, often had I heard tales of the Sunderbans. Stretching across more than 10,000 square kilometers (almost 4,000 square miles) in the state of West Bengal and into Bangladesh, this delta is the world’s largest — and also its largest mangrove forest — an ecosystem so special that it’s been a UNESCO World Heritage Site since 1997. But even more than all that, we’d always heard tell of the mysterious realm of the endangered — and occasionally man-eating — Royal Bengal Tiger, which reaches lengths of up to ten feet and more than 400 pounds. 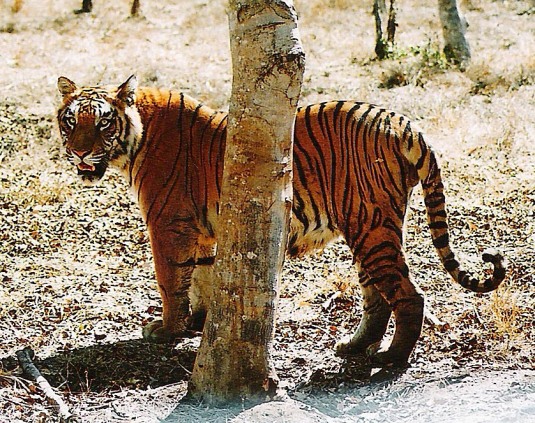 So it was that during a recent dry season (September through April — much recommended!), my wife Anila and I flew to Kolkata (Calcutta) and rented a car for the 3 1/2-hour drive to the town of Sonakhali, past the lush, picturesque wetlands, farm fields, and fish hatcheries of rural Bengal. From there it was a 2 1/2-hour boat cruise upriver to Sajnekhali in the Sunderbans National Park.

We’d booked ourselves into the 30-room, tourism-office-run Sajnekhali Tourist Lodge (1,500 rupees/US$30) per night, including meals, tours, and transfers). Built on stilts, it’s the only place where humans are allowed to overnight inside the forest itself. It’s attractive and comfortable enough, and the Bengali fare is certainly tasty, but the lodge is still simple and rustic, with generator-run fans and lights but no electricity or A/C. If you’d like a touch more luxury, stay at Sunderban Tiger Camp just across the river (huts from Rs. 4,850/US$105 for two days and one night, also all-inclusive) or Bali Island’s six-cottage Sunderban Bali Jungle Camp (from Rs. 3,800/US$76) run by an aid organization. You can even opt to sleep aboard the launch that brought you upriver.

Just what makes this aquatic forest so special? For starters, it’s formed where the Ganges and Brahmaputra rivers meet the sea, and the waters in its numerous rivers, creeks and canals rise and fall with the tides. That and the salinity make it one of the world’s more hostile terrains; most of the living things here — animals and plants, land and aquatic — have had to develop unusual adaptations to survive. That includes the tigers themselves, who have become strong swimmers, learned to fish, and even survive on salty and brackish water.

There are 83 species of mangrove trees, and their snakelike roots and the surrounding waters harbor wildlife galore, including blood-red fiddler crabs and other crustaceans, the strange mud skippers (fish that walk on land and even climb trees); and various species of dolphins, porpoises, turtles, estuarine crocodile (the largest in the world — up to 10 meters/33 feet), monitor lizards, snakes, frogs, and toads. Not to mention the birds — the Sajnekhali Bird Sanctuary is a birders’ paradise where we spotted plenty of marvelous exemplars including a number of the 15 species of raptors like the peregrine falcon, white-bellied sea eagle, and brahmini kite.

In our four days in the Sunderbans, Anila and I got around quite a bit. We climbed the lodge’s watch tower and saw some spotted deer. We walked among the ponds and hatcheries where eggs of crocodiles and giant Olive Ridley turtles are hatched and babies released into the wild. We boated through the intricate maze of rivers, streams, channels, estuaries and creeks created by the mighty Ganges and Brahmaputra river systems.

We also got to explore village life and ancient temples. In Netidhopani we felt like a bit like Indiana Jones exploring the ruins of its 400-year-old Hindu temple, about which not even the villagers could tell us much. But they did regale us with tales of tigers and gods (a few can speak and understand English; guides also interpret for visitors). They worship the forest goddess Bonbibi, they said, who protects them from tigers and other calamities, and when venturing into the mangrove forests, a common protection technique is wearing backwards-facing masks resembling human faces (tigers prefer to sneak up on prey that’s unsuspecting, not alert). Attacks do occur, rarely — invariably when humans trespass or blunder onto tiger turf.

But…sigh… At night we did hear occasional tiger roars, and we spotted fresh spoor on muddy banks. But even though this reserve harbors more of these magificent creatures than any in the world (274 at last count), I was disappointed that we never managed to sight a single one ourselves. “The area is very large, the terrain difficult, and these animals wide-ranging, you must understand,” said one of our guides apologetically.

I quickly got over it, though, because the Sunderbans still possess a mysterious, otherworldly charm that honestly had both of us mesmerized and reluctant to leave. If you come to India, you’ll find it’s well worth devoting several days to an eco-adventure you’ll remember for years.

Making Arrangements: Traveling to the Sunderbans is easy and not necessarily expensive; you can book through a number of tour operators, or online through the West Bengal Tourist Office, which arranges visitors’ permits, tour packages, and customized itineraries.