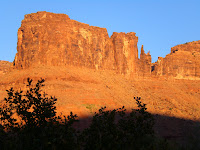 From Luxury to Primitive
Moab, UT
(TTBS) The sun was shining, the sky a beautiful cloudless bright blue as we pulled out of our luxury accommodations in Avon, Colorado. The front that had caused the snow showers had finally pulled out of the area, temperatures were raising and clear weather was predicted for the next few days. We headed to Moab, Utah to camp in the beautiful desert near Arches National Park.

Expecting chilly evenings, we made one more stop for camping equipment. In the camping section at a convenient WalMart we pondered over our choices. Should we get the really cool bedding set designed and prepackaged just for our queen size air mattress or should we go for the fleece inserts for our sleeping bags. We choose the inserts, thinking to avoiding a wrestling match for the covers.

We drove out of “Colorful Colorado” and into beautiful Utah departing I-70 heading south on Hwy 191. As we got closer to our destination the traffic picked up. Unusual for a Thursday, we thought. And then we got the bad news. It was a school holiday weekend in Utah. Who would have though all the campgrounds would be full this time of the year!

At Arches National Park we picked up an information sheet that listed the National Forest campgrounds located in the area and began to search for any available spot. We got lucky and found a site along the Colorado River on Hwy 128.We quickly set up our camp. 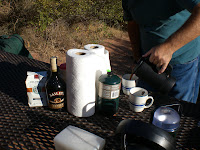 Next on the list was relaxing with a cup of freshly pressed Starbuck’s coffee while gazing at the beautiful scenery that surrounded us.

I was struck by one scene in particular. At the top of the mesa, the play
of light from the setting sun on the tall spires made it appear as if, frozen in stone; an Indian Maiden sat before a fire, relating a tale of long ago to a young child at her knee. From a nearby cliff face, a grandfatherly figure looked at the scene fondly.


The scene was even more fantastic the following morning. With the angle of the sun just right, the rock cast a shadow that looked just like a motherly figure on the nearby cliff. I had to get out my sketching pad and paints. Do you see the figures? 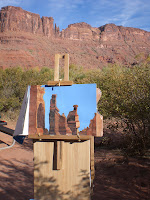 The only drawback of our site was that during the heat of the day there was little shade. We solved this problem by driving down to the next camping area where there was easy access to the river and several large shade trees.

The evenings were breathtaking. The imposing cliffs turned from a dull red-brown to a
bright red-orange, only to be swallowed in shadow and disappear as the sun set. We cuddled up in front of a blazing fire. Overhead we watched the twinkling stars of the Milky Way waiting for the thrill of a shooting star in the black nighttime sky. Occasionally we spotted rapidly orbiting satellites before they faded into nothing.

Slowly the awesome cliffs became more visible as the evening lengthened. The stars began to fade and suddenly over the edge of the mesa a nearly full moon appeared flooding the area with light.

We slept with the rain cover off the top of the tent allowing us to view the sky. With the bright moonlight the shadows from the nearby bushes seemed to dance on the dome of the tent. We snuggled up in our warm bags with the fleece liners and slept comfortable even when the temperatures dropped into the low 30’s overnight!

Comphoppers: No house, No car, No worries. At home where ever we are. .

Comment by Peter Parker on September 27, 2010 at 2:52am
Arches National Park is one some of the best geological wonderland of the world. It's a home of largest sandstone arches. The good thing is that all areas can be discovered by hiking trails. Delicate arch at sunset, Park Avenue Trail, Double Arch, Skyline Arch and Sand Dune Arch & Broken Arch are some of must seeing sights. Moreover, the Dinosaur Diamond Scenic Byway is nice to explore the area by drive.

Have a comfortable stay in Luray VA Accommodations