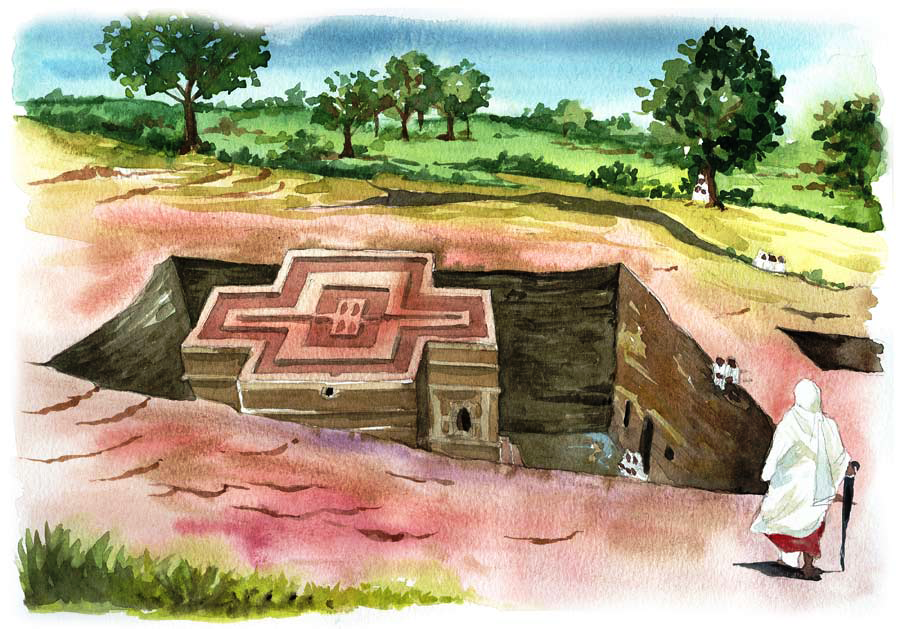 Among the rock-hewn churches of Lalibela, Bete Giorgis (the house of Saint George) is found southwest of the village on a rocky ground. The temple is cross-shaped, perhaps the most attractive structure of Lalibela’s rock-hewn churches. When Lalibela had finished constructing the churches, Saint George riding on his white horse revealed himself to Lalibela to tell him that there was no temple in his name. Taking George’s word, Lalibela went to this rocky field and constructed this amazing temple. So the priests of the church say.

The only way to this blessed place is an underground passageway. Entering the compound of the church, one would see many small caves in the walls of the compound. The inner parts of the caves are crammed with bones and skeletons of humans. Both in its design and carving there is no church which equal in quality to Bete Giorgis. And the reason for its incredible beauty, say the priests, was because Saint George himself looked after the construction daily. They even will show you the prints of the hoofs of George’s horse on the ground. Or even tell you the horse riding competition that had taken place between Lalibela and Saint George The church is built in the shape of a cross. The floor, which is designed to have a shape of the cross, has a special carving on it. The entrance of the church compound is the gate to on the west side, but the biggest entrance is found to the east. Bete Giorgis when viewed from the top, appears like a huge cross with no room inside. When the name Lalibela is mentioned, the first picture that comes to most people's minds is Bete Giorgis. Even those who have never been to Wollo, Ethiopia know Bete Giorgis for its image is used on postcards, calendars, T-shirts and many advertisements. 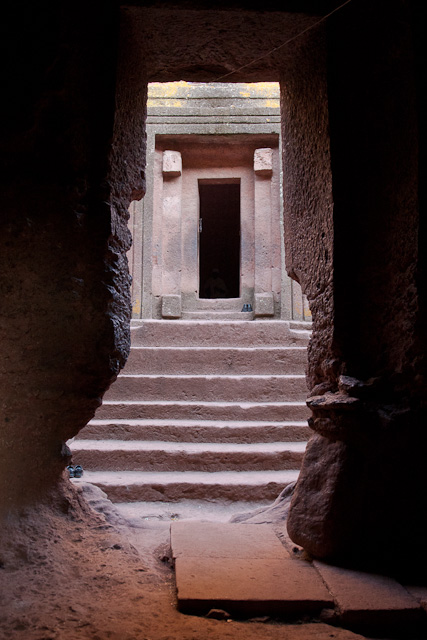 Once you have seen it both from  outside and in, you will have no doubt that there is quite a relationship between the interior and exterior of this church.

Shortly put, it has taken Lalibela, with the help of angels, 23 years to finish building all the churches. The very reason for these churches to have been built was that people were dying on their way to Jerusalem every year. Some run out of food, others lost their way and some were attacked by beasts, on their way to Jerusalem. And it usually would have taken several months of tiresome travel to reach there. For these reasons, Lalibela felt that he must build the ‘the second Jerusalem’ in Ethiopia.

Tourists of any part of the world open their mouths in amazement when they first see these incredible churches. There are many untold beauties of these buildings. Better is for anyone to come and see and leave the judgement for the heart.