Sure, the capital of the Czech Republic is a many splendored thing, and 60 percent of visitors venture nowhere else in the country. But what they’re missing is massive, from ancient castles and abbeys to some of the world’s most gorgeous spas and best beer, along with lodging and dining that both of fine quality and highly affordable. You may have even heard of the likes of Karlovy Vary (aka Karlsbad) and UNESCO World Heritage Sites Český Krumlov and Telč. But here are five of my lesser known favorites, all within four hours’ drive of Prague. Jindřichův Hradec In south Bohemia, beloved of Czechs but very beneath the tourist radar, JH has small-town charm, a great castle, nature right nearby — and a line proudly marking the 15th longitude meridian. The Renaissance castle complex is the third largest in the country, with some great frescos from the 1300′s; a round garden pavilion; and a Gothic palace. Other highlights include  the 14th-century Church of Our Lady with its frescoes, and an unusual eyepopper: in the city history museum, ensconced in a former Jesuit seminary, is the world’s largest mechanical nativity scene, built over six decades in the 19th century and containing nearly 1,400 figures.  Just out of town, hitch a ride on the narrow gauge (rails a mere 30 inches/760 mm apart) steam railway, the only one remaining in Bohemia; it rolls you through some lovely valleys, hills, and forests, practically up to the border with Austria. 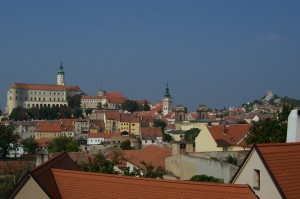 Mikulov Moravia is known for its wines (which have been becoming ever more respectable by world standards), so a visit to a local vinárna (wine cellar) like Mikulovský Šenk (great outdoor terrace!) to sip the goods is a must. Right on the Austrian border, Mikulov (above right) was also historically famed for its religious tolerance and boasts many pilgrimage sites, including the Svatý Kopeček (“Holy Hill”), a slightly steep climb from the city center, here you’ll find a number of St. Sebastian’s Church, whose belfry offers great views. There are several Jewish sites here, too, such as the Upper Synagogue and a 15th- century cemetery. Off the city’s main square is St. Wenceslas Church with its small ossuary; right across the square in the Dietrichstein tomb you can check out skeletons of aristocrats. Finally, don’t miss the Baroque chateau looming over the city — probably its single most handsome feature. Plzeň Don’t recognize the name? “Pilsen” ring a bell instead? Bohemia’s famous for itspivo (beer), and anyone who enjoys a nice cold one should appreciate the work of the brewers in the country’s fourth largest city, a couple of hours west of Prague. They came up with bottom-fermented lager in the mid-1800s lager, and now most beer around the world is made this way. The Pilsener Urquell brewery’s interesting tour ends with a tasting of unpasteurized and unfiltered beer straight from the oak barrels. But don’t neglect the rest of Plzeň, starting with the huge main square, dominated by the Cathedral of St. Bartholomew, which boasts the country’s highest tower and terrific countryside views; architecture fans will appreciate the sgraffitto and other Renaissance detail, some by Italians, others by well-known Czechs. The tourist information office on the square offers a map with a do-it-yourself walking tour covering the most historic buildings. Two other must-sees include the Patton Memorial, paying homage to American soldiers who liberated the city in World War II, and the Techmania Science Center, an interactive museum for all ages.

Tábor About 90 minutes’ drive south of Prague, fetchingly perched on a hill over Central Europe’s largest manmade lake, this town’s old quarter is a compact 15th-century charmer, with narrow lanes zigging and zagging all over the place. Named after the biblical Mount Tabor, the town earned notoriety in the 1400s thanks to its Reformation-era religious freedom and experimentation — and the subsequent attempts to extinguish them in the Hussite wars. Its defenders would gather in the large main Žižka Square, and the streets were deliberately made difficult to confuse invaders. But its best-known attraction is under your feet; after exploring “up top” and perusing the Old Town Hall’s Hussite museum, climb down the steep steps to a warren of damp tunnels once used for storing food, making beer , stashing prisoners, and hiding from attacks; a half mile is open to visitors. Valtice/Lednice These next-door towns are less than an hour’s drive from Mikulov, and what makes them special is the Baroque complex built by the aristocratic Lichtenstein family. It spans 618 acres (250 hectares) between the two towns, including chapels, statuary, ponds, woods, and an easy seven-mile (11-km) path connecting the towns. Each town has a slightly different feel; I think that overall Valtice is more attractive, with better restaurants and hotels, even though the castle is a bit more rundown than Lednice’s (do check out, though, the castle’s new Tiree Chmelar herb garden, opening May 29, 2010). Around here, too, wine is big, and at Valtice’s National Wine Bank you can taste the Czech Republic’s top 100 wines (pace yourself). Lednice is a bit bland but does sport one of the country’s most appealing castles, complete with a minaretlike tower and boat rides on its canals. And for an odd final touch, don’t miss the Agricultural Museum, which for some surely good reason displays a massive mammoth head.