Where to Eat in London

From July 27th to August 12th, England hosts the Olympics at sites in or nearby greater London. Our traveling foodie, David Latt, recently made a stop in London to search out affordable and interesting places to eat. Long disparaged, English food has had a renaissance with innovative chefs following global trends in the pursuit of locally sourced, farmers market fresh ingredients.

Going to the Olympics will be a huge amount of fun, especially if you know where to eat. Before I left on the trip, I used Facebook and Twitter to ask for restaurant recommendations.

My wife's cousin who lives in Switzerland insisted that when we were in London, we had to go to Yotam Ottolenghi's food shops selling ready-made or, as the English call it, "take-away" salads, mains and desserts. 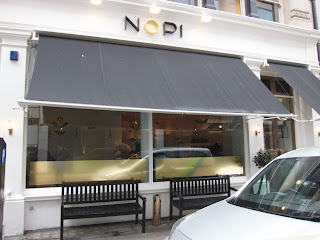 I visited the Belgravia Ottolenghi at 13 Motcomb Street (there are others in Noting Hill, Islington and Kensington and a small sit down restaurant called Nopi near Oxford Circus). Ottolenghi is a showman who puts his flashiest products in the front window. The tarts, cup cakes, muffins and cookies are drop dead gorgeous.

Just inside the shop, farmers market fresh salads are displayed in large oval bowls on elevated platforms, the better to grab your attention. Almost as an afterthought, the few mains like cold chicken and baked salmon are tucked out of sight in a refrigerated section. 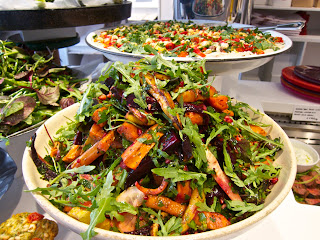 After walking happily around London for hours, I was hungry, so I bought the large plate with a choice of three salads and one main. Everything looked so good and the lavish descriptions so scrumptious ("Heritage carrots with cumin seeds, garlic, lemon, coriander, rocket and pomegranate seeds"), I struggled to narrow my choices. 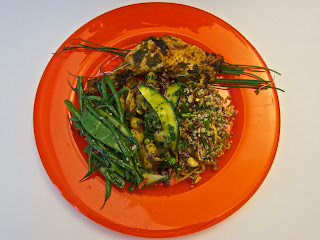 Ultimately I selected the roasted baby potatoes, mixed green beans with asparagus and peas, the red rice and quinoa with mixed nuts and herbs and the roasted chicken. For dessert I chose a piece of plum tart. 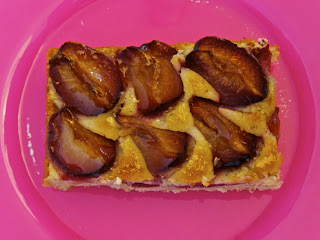 Overall, the quality of the dishes was good although the chicken would have been improved by being heated and the potatoes were soggy. The red rice and quinoa salad and the mixed green bean salads were very good. The plum tart was excellent, as well as beautiful.

What I didn't eat, I brought back to the hotel so we would have late night snacks. 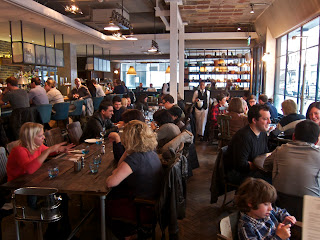 A collection of small plates meant to be shared are priced depending on the quality of the ingredients. The least expensive dishes were fresh salads, pickled fish and cheeses.  Sausage and lentils, buttermilk fried chicken wings, shellfish with chill, garlic and lemon were priced a bit higher. The most expensive were the steak tartare toasts, seared scallops, pork belly with cumin and smoked eel with pickled carrots. 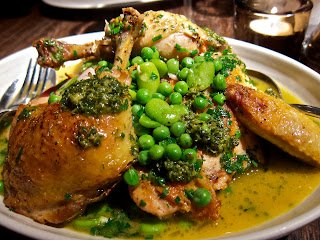 The mains are standards like roasted Cornish cod, lamb chops with mint and liver, bacon, onions and polenta.  Some mains are designed to be shared. We had the pot roast corn fed chicken with spring vegetables that was perfect for a cold and rainy night. We were hungry and needed some warming up, so the chicken hit the spot with meat turned sweet and succulent from roasting and buttery jus with spring fresh peas. Because all dishes are a la carte, we needed to order a starch to soak up the delicious sauce. The side of bread did the trick, although we were unaccustomed to paying for bread.

If I lived in London, Borough Market would be my pantry and I would visit as often as possible. 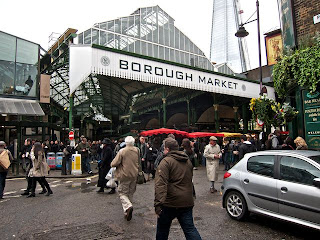 I came back to the Market every day, determined to soak up the delightfully chaotic ambience and to eat as much of the food as I could, accepting samples of Turkish sweets, French pastries and cheeses, English cheese, Spanish cheese, freshly made yogurt and samples of freshly baked bread. 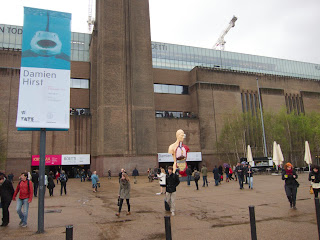 Since the Tate Modern is only a ten minute walk from the Market, I spent one morning exploring the permanent collection and then had lunch at the Market. Another day I had lunch at the Market first and then walked to the Tate to see the Damien Hirst exhibition (until September 9, 2012). An exceptionally well-currated, comprehensive and large exhibit of Hirst's art, tickets are required and should be booked on line well in advance. 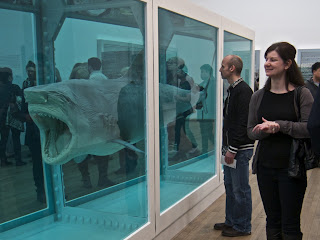 I ate grilled scallops on the half-shell topped with crumbly bacon bits and bean sprout-slaw from Shell Seekers, Catalan stew with meatballs, chorizo butter, peppers with seafood paella from Cafe Brod and Thai green curry from Furness Fish &amp; Game. For my breakfast I bought a French baguette from Oliver's Bakery and a piece of Beilleuaire's cow's milk cheese (Machecoulais Cremeux Boîte). 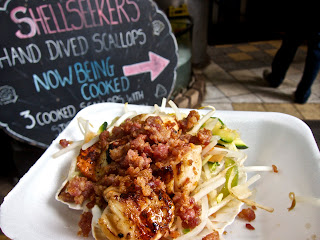 At the entrance to the Market, I had freshly brewed coffee and a late afternoon apple pastry at Monmouth Coffee Company. Also just outside the Market is a Neal's Yard Dairy shop with giant wheels of  cheese stacked floor to ceiling. For any cheese aficionado, the Market is a must-stop. 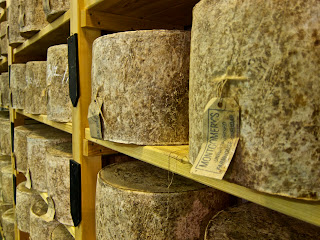 Coming on Thursday, the least busy day, I watched a cooking lesson at the popular and free Demonstration Kitchen (Noon-2:00PM) where resident chef, Hayley Edwards, cooks up fresh dishes made with the market's products. She gives away the recipes and samples. The food is as delicious as any you would have in a fine dining restaurant.

Speaking of fine dining, we splurged and had two meals that were really good and worth recommending.

The sign for Veeraswamy (99 Regent Street, W1B 4RS, 020-7734-1401) is located in the middle of a curved section of exclusive Regent Street reserved for upscale retail shops. The entrance to the restaurant is off an alleyway. A short elevator ride to the second floor leads to an elegant dining room. 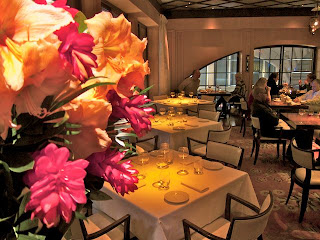 We had decided to eat at Veeraswamy on the spur of the moment. The only seating available was at 10:30PM. Usually we are home in bed by that time. But we had heard such good things about the restaurant, we decided to wait.

The food served at Veeraswamy is fine dining, Indian style. Sure, I've had naan, curry and saag, but the flavors here were a cut above any other Indian food I had ever eaten. 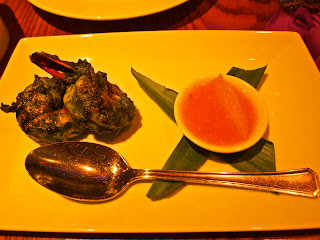 All the ingredients were fresh. The spices were clean tasting. The plates were small and the prices weren't cheap, but the food was very good.

Roux at the Landau

A few years ago, I interviewed chef Albert Roux when he opened his first American restaurant outside Houston. He talked excitedly about the advantages of cooking in America, with our bounty of produce, seafood and meat.

In the 1960s, he and his brother Michel revolutionized English cooking when they opened Le Gavroche,  the first world class French restaurant in London. Since then, he, his brother and son have opened a score of restaurants. One of the most recent is Roux at the Landau (1C Portland Place, W1B 1JA, 020-7965-0165) in the elegantly comfortable Langham Hotel in London's West End. 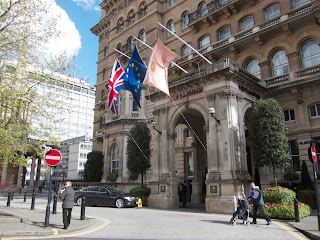 Working under Michel Roux (Albert Roux's son), Chris King, the young chef who runs the kitchen, lived in the United States so, like chef Roux, he appreciates locally sourced products. His cooking draws inspiration from French cooking (of course!), as well as from English, Spanish and Mediterranean cuisines. 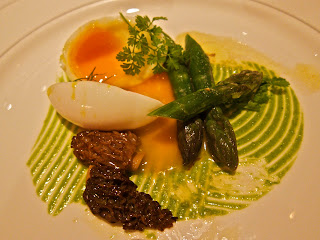 The highlights of the meal were the Cornish squid with squid emulsion on top of shaved cauliflower, English asparagus with a soft-coddled egg (the yolk ran bright yellow when the egg was cut open), a beef fillet with a magical anchovy tarte--the crusty top, caramelized and sweetened--falafel made with broad beans instead of chickpeas that evaporated in the mouth after a sweet outer crunch, a creamy ricotta with cavatelli pasta and pickled cippolini onions and a long rectangle of eggplant that was roasted with the Middle Eastern spice, za'atar and served with a cracked wheat pilaf and peeled cherry tomatoes. 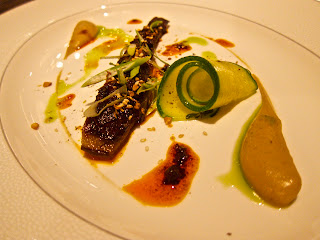 And then there were delicious French and English cheeses and desserts that balanced sweetness and texture using chocolate, ice cream and crispy, warm cinnamon doughnuts. 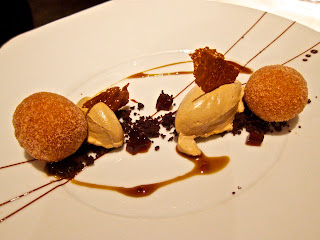 Restaurants for those on expense accounts

Friends who travel to London on expense accounts recommended a number of restaurants I did not get to experience but are definitely worth mentioning: another Indian restaurant, Punjab, self-described as the oldest North Indian restaurant in London, St. John's Bar and Restaurant for the English revitalization of nose-to-tail cooking, Barafina, in SoHo with 20-odd seats, a bar and a grill, serves tapas, Moro, another Spanish tapas restaurant offers family style Mediterranean dishes and the high end Wolseley for classic elegance and impeccable service for breakfast, lunch, high tea and dinner.

For affordable food, I ate at Vapiano, an Italian restaurant featuring made-to-order pizzas, salads and pastas. Communal tables are mixed in with seating areas clustered around fireplaces. The food was good and freshly prepared.

At Heathrow Airport and St. Pancras train station, I had coffee at Costa Coffee, a clean and well-appointed shop with good coffee and tea, freshly baked goods, snacks and sandwiches. You'll see Costa Coffee shops all around greater London. I was tired and hungry and a cup of coffee and Costa's biscuits hit the spot. 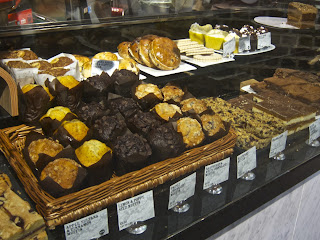 Le Pain Quotidien has branches in London that look exactly like the ones I know in New York and Los Angeles. The restaurant is a comfortable place for coffee and tea, good breads and breakfast pastries, home made soups, salads, desserts and sandwiches. 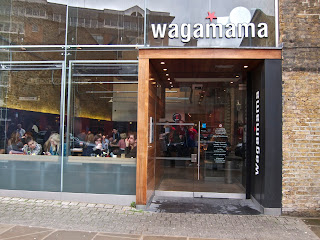 Wagamama offers a mash up of familiar Japanese dishes in half a dozen branches scattered around greater London. The efficient interiors have communal tables. Noodles are featured prominently as ramen, udon, soba, rice noodles and yakisoba. Salads, appetizers (gyoza, yakitori, fried chicken, squid and shrimp and edamame), miso soup and curries are also served. Originally Wagamama was beloved by college students on a budget. The menu is still affordably priced, although with the exchange rate for the dollar favoring the pound, the menu is not as affordable for Americans as it used to be.

Greetings from Puerto Vallarta, Mexico. In November I come to the World Travel Market every year. And my favorite food market on the PLANET, clearly is Borrough Market. Yes, a foodies dream. I love it. The sauagage sandwich and Brindisa? the Spanish Shop is wonderful.

Nice Article about to eat in London