A Whisky Night to Savor

On a recent Thursday night in the enticing Hillcrest area of San Diego, Planet Rooth Design Haus brought together the seemingly unlikely but totally pleasing combination of high-end whiskeys, gourmet appetizers, and beautiful artisan furniture.  A group of about 40 gathered to partake of it all and we had a unique and completely enthralling evening. 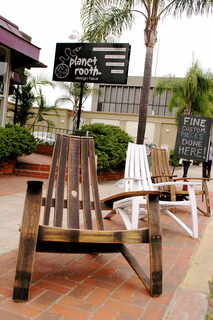 If there was a highlight in an evening of highlights, it was the setting in Planet Rooth’s intimate studio and gallery, the artistic enterprise created by Gustaf G. Rooth, Sr. and his artist son, Gustaf Anders Rooth (known as Junior).  We were surrounded by the exquisite furniture designed by Junior and also his vivid, expressive paintings.  While Rooth Design Haus has been in existence for more than 20 years, it was about four years ago that the design house established its own artisan furniture line, appropriately named Barrelly Made It, which consists of distinctive furniture crafted from repurposed wine and whiskey barrels.  The meticulous craftsmenship that goes into the line’s chairs, tables, ottomans, stools and benches is recognized by art lovers from all over the world.

Gustaf Sr. says, “Our furniture is more than furniture.  It is functional art.  We call our customers 'collectors' because they buy the furniture as much for its beauty as its uses.”

However, I happily discovered that the utmost in comfort is obviously also a priority. Once you sink into one of their barrel chairs you will not want to get up.

The whiskey tasting component of the evening was conducted by Ray Pearson, also known as The Whiskymeiser (www.whiskytastings.com), who served guests a sampling of six whiskeys that he chose because of their relationship with the woods used in the Gustafs’ beautiful wooden furniture.  Pearson, an entertaining and deeply knowledgeable speaker on the subject of whiskey, started out by explaining that the evening was called “whisky/whiskey” because he was serving both scotches and bourbons. We learned that whisky spelled without an “e” is generally scotch whisky while whiskey with an “e” usually refers to American whiskey or bourbon.  Pearson fascinated us with his descriptions of the various whisky/whiskey samples and included delightful anecdotal stories along with a bit of history.

Making the evening even more captivating, each whisky was accompanied by a delectable canapé created by Chef Robert Conaway (Chef Rob at www.aGreatChef.com) and artistically served on pieces of barrel staves.  Here is a brief rundown of the whiskeys and food pairings we enjoyed:

Maker’s Mark Bourbon:  We learned that most American whiskeys are made with rye but Maker’s Mark has no rye and is all wheat and corn-based. (By law, a drink labeled “bourbon” must be comprised of at least 51% corn.) Mellow and sweet, Maker’s Mark is one of the best selling bourbons in the United States.  Along with the Maker’s, we enjoyed a delicious shrimp mousse topped with caviar.  The shrimp cut the heat of the whiskey and the caviar added just the right kick of salt. Maker’s 46 Bourbon:  This was a more refined whiskey, which had been aged in traditional oak casks for four to five years; then French charred oak slats were added to the aging barrels, and the whiskey aged for a few more months. This rich bourbon was perfectly paired with a melt-in-your-mouth chicken liver truffle pate with pickled onions. I must say this might have been the best pate I had ever tasted.

Woodford Reserve Double Oaked Bourbon:  The expression of Woodford is more subtle than either of the Maker’s Mark bourbons because of its “double oaking” in two different oak barrels with minimal charring. Woodford is currently the Kentucky Derby’s official bourbon. The mild hazelnut and apple flavors of Woodford Reserve Double Oaked were nicely matched with a luscious caramelized apple tapenade combined with hazelnuts, marinated black currants, and a crispy fruit topping.

The Balvenie DoubleWood Single Malt:  We learned that “single malt” means the whisky comes from a single distillery. This whisky started out in traditional bourbon barrels for about ten years and was then transferred for another two years to barrels made of European oak that had previously been used to age sherry. The result was one of the first whisky brands to incorporate multiple woods in its recipe. Our accompanying canapé was a delicious Moroccan chicken salad, mixed with marinated currants, paprika and cumin, which the chef had created to match the subtle spice of the wood. Auchentoshan Single Malt: This is a Lowland whisky distilled in Glasgow, which has been aged in three different kinds of barrels—first a traditional American Oak, then sherry barrels from Spain, and finally a European Oak used to age sherry from white grapes. The resulting whisky had a pleasant sweet dessert flavor.  This whisky enhanced another special treat from Chef Rob: a flavorful Gruyere cheese topped with a dollop of Turkish fig honey.

Arizona High Spirit Single Malt:  The most unique of Pearson’s offerings, this whisky was surprisingly produced in the Scottish style in the 7000-foot elevation of Flagstaff, Arizona. Its taste was nicely robust and very smooth for its age of only about three years.  Pearson said he included this whisky because it had been mesquite-smoked and ties in so well into the wood theme of the evening.  Again, Chef Rob offered us a delectable canapé—bourbon braised pork with peach chutney and fried shallots. In the midst of all this glorious eating and drinking, Gustaf Junior spoke about his joy at hosting this event.  He said, “This is a very monumental moment in my career. I have always had the goal of having a studio, gallery, and gathering place for people to enjoy art, culture, entertainment, and good food.  My vision has been to have a 'design haus,' as they do in Europe. And now we have it and this is the first of many wonderful evenings bringing it all together.”

Gustaf went on to thank his father for his support of his dream.  He said, “Without Gustaf Senior, I would not be living my dream. This is all a great adventure. What we strive to do with our furniture is to help you enjoy your life and to add to the loveliness that life has to offer all of us.”

Ray Pearson added, “We’ve been talking tonight about the interaction of art, furniture, good food and drink, and friendships.  It is so wonderful that an artist like Gustaf can see an exhausted wine or whiskey barrel and envision a wonderful future for it as a beautiful piece of furniture.” I think everyone in attendance agreed that this was a truly unique and pleasant evening with its ingenious combination of art, food and whiskey. When the presentation was over, we lingered and toured the wood shop behind the studio, enjoying the ambiance of the setting where all the furniture design and creation takes place. I believe we all left with the feeling that “it’s a beautiful life” and we were glad to be part of it. Planet Rooth Design Haus is located at 3334 5th Ave. in the Hillcrest area of San Diego. For more information about the Barrelly Made It furniture line, call 619-297-9663 or visit online at www.barrellymadeit.com.

You did a nice job on describing the event, Susan. Todd's photos are terrific. About photo at the bottom of the article: the two chairs and table represent a new color scheme by Barrelly Made It - a sort of two-tone treatment of the woods, consisting of reddish and darkish tones. The set is on its way to a collector in Washington, D.C.

I loved the information about whisky/whiskey and the variations to be found in this spirit. The article answered many questions about the aging process and how different flavors are derived. Planet Rooth Design Haus appeared to be the perfect setting for such an event.

I hope you will enjoy this story about a great night we had recently savoring whisky, fine art furniture, and gourmet appetizers.  If you are ever in San Diego, you need to make Planet Rooth Design Haus a required stop.