Now that summer is almost upon us, family vacations are very much on the menu. For those interested in heading to the USA, this blog has covered the country's famous "Windy City" in various ways, including the jazz scene, multiculti dining, movie locations, the city's Spanish connections, and all-around cool attractions which appeal to most everyone. Chicago, and the surrounding area of Illinois, however, can also be aces for a brilliant family holiday. Let me count the ways...

Dubbed "Chicago's front yard", the crown jewel of the Loop section of downtown is a 127-hectare (313-acre) spread packed with family-friendly stuff. At Millennium Park at its northwestern corner, make funny faces in front of the massive, shiny, futuristic silver installation known as the Cloud Gate (aka the Bean); run giggling through squirting water of the Crown Fountain (top, designed by Spaniard Jaume Plensa, by the way); have a blast at the playground, rollerskating course (ice skating in winter), and climbing wall of next-door Maggie Daley Park; and bust a few boarding or blading moves at the Skate Plaza. Then at Grant Park's southern end are a trio of beloved Chi-town institutions. The Field Museum of Natural History is counted as one of the biggest and best in the world, designed to appeal to all ages of course, but especially kid-friendly with its interactive PlayLabs for the under-six set; fantastic exhibitions about nature and cultures past and present from across the world; and most especially its fossils and dinosaur skeletons - of which the star of the show is a Tyrannosaurus rex named Sue (above). Across the way and if anything even more popular, the Shedd Aquarium is home to more than 1,500 species including beluga whales, sharks, penguins, giant marine turtles and many, many more (some of which visitors can even meet up close and personal). Then there's the Adler Planetarium - the USA's first, founded in 1930 - with a bevy of space-science exhibitions (many of them interactive, and including remarkable artifacts such as the 1966 Gemini 12 space capsule) along with three full size theatres. Dare I say...out of this world? 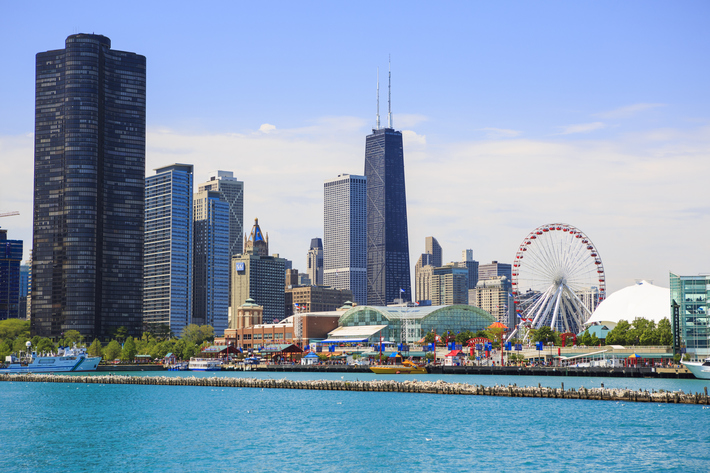 Jutting 1,010 metres (3,300 feet) out into Lake Michigan, built in 1916 as a mixed-use passenger/freight pier, and named in honour of the naval veterans of World War I, these days its 20 ha. (50 ac.) are packed with eateries, shops, and attractions including the three-floor Chicago Children's Museum (considered one of the country's best); an IMAX theatre; and a Ferris wheel and other rides. Especially in summer, there are also concerts and other special events, as well as fireworks every Wednesday and Saturday night.   https://youtu.be/GGgpkHcMmbM

Chicago is of course a classic city for skyscrapers - it had some of the first in the world - and these days many major urbs have buildings or communications towers with observation decks. But the Skydeck on the 103rd floor of the Willis Tower (the Western Hemisphere's tallest building) goes most of them one better with its Ledge - actually, there are a pair of them, clear reinforced glass boxes jutting 1.3m (just over four ft.) out from the building, where adventurous little ones - and their parents - can feel like they're floating 412m (1,353 ft) over the cityscape, with eyepopping views out which on a clear day take in parts of three other states besides Illinois (Michigan, Indiana, and Wisconsin). And the rest of the 103rd floor is occupied by a multimedia exhibition about the Windy City that's engaging for all ages.

For family fun, zoos are always a good bet, and this 14-ha. (35-ac.) zoo in the eponymous elongated park running along the lake shore (Chicago's largest) is home to some 1,100 animals of more than 200 species from a wide variety of habitats around the world, from penguins and iguanas to lions and polar bears. Its "Farm in the Zoo" also lets kids get up close and personal with goats, cows, and other critters, and learn about farming and food production. Finally, as an added bonus, admission is totally free of charge.   https://youtu.be/49MiktJzbGI

If you have time for a day trip, there are plenty of options in what's known as Chicagoland, the surrounding area. About an hour and 20 minutes north of the city, this Illinois county also bordering Lake Michigan offers a wonderful mix for families. On the nature side, it's home to the state's richest variety of plants and wildlife, and greatest number of rare species, featuring ecosystems like prairie land, wetlands, oak groves, glacial lakes, streams; nature lovers can experience all this in various nature reserves.

There are a number of family-friendly attractions up here that are man-made, as well. Exhibit A is Six Flags Great America in the town of Gurnee, with a bevy of rides from mild to wild (its collection of 16 roller coasters is especially thrilling) and appearances by Superman, Batman, Bugs Bunny and other Warner Brothers and DC Comics movie characters, along with a water park called Hurricane Harbor. Right nearby in the same town is another aquatic playground - indoors this time - at Great Wolf Lodge, with a bevy of water slides, wave pools, lazy river, and much more (included for resort guests, with day passes for outside visitors). And also in town, check out Gurnee Mills, a nearly 200-store shopping mall which includes a goodly number of outlet shops as well as mostly fast-food) dining, a 19-screen cinema, mini-golf, and laser tag. 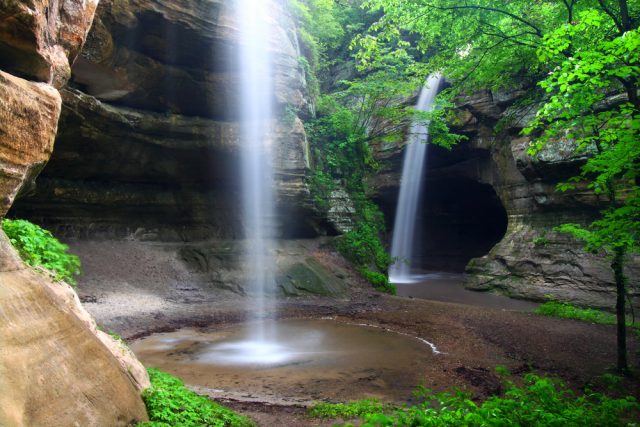 Back to the nature/outdoorsy side of things, along the Illinois River a couple of hours southwest of Chicago Starved Rock State Park is another of the state's most popular destinations. Its just over 11km² (just under four sq, miles) are especially well known for its lovely waterfalls (active in spring and after heavy rains) and 18 dramatic canyons, as well as a number of precolumbian and even prehistoric archaeological sites. In addition to a visitor centre, there are some 21km (13 mi.) of well marked trails, as well as opportunities for boating, fishing, swimming, horseback riding, and kayaking; there are also educational programmes and guided hikes as well as trolley and boat tours. Visitors can also overnight, either at campsites or the 81-year-old Starving Rock Lodge, with nearly a hundred hotel rooms and individual cabins as well as several dining options (try the signature walleye fried in ale batter at the main restaurant).