Mysterious figures mixing potions; skull rituals; and tales of witches on October 31st?  All par for the course on Halloween night. But in Galicia, these creepy doings go back thousands of years, when back in the mists of time this northwestern corner of today’s Spain was dominated by Celtic tribes, who lived here even before some migrated to today’s British Isles as well as northern France.

These ancient people and their Druid priests marked the transition from the summer harvest season to the beginning of the darkness of winter with a festival called Samhain (Samaín in Spanish), which by extension also aimed to unite the worlds of the living and the dead. And it’s been experiencing a renewal in recent years, celebrated all over the autonomous community with – among other things – bonfires; the telling of scary stories; the casting of spells; mystical Celtic chants; re-enactments; and consumption of the flaming queimadas (below) made from potent aguardente (firewater). 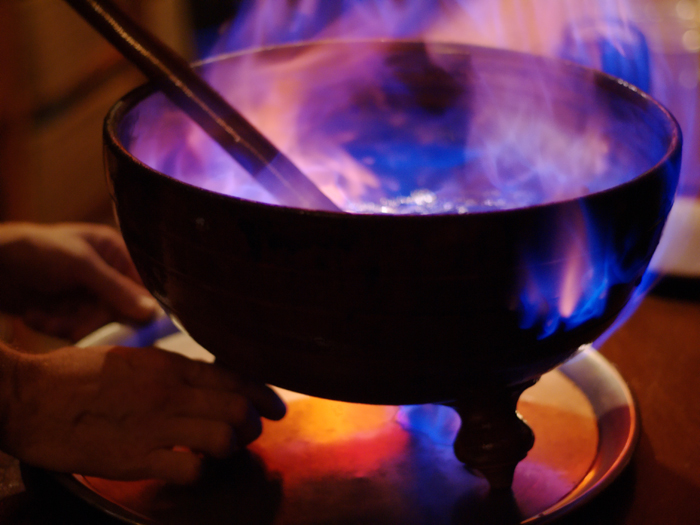 But there are some localities where Samhain is more high profile than others. One of them is the small, historic town of Cedeira, on the Rías Altas coast an hour and a half from A Coruña. This setting of beaches, forestland, and rugged cliffs is a perfect one for a night of tasty terror.

Don’t forget to don your chestnut necklace and de rigueur mask/costume to walk the cobblestone streets of Cedeira like the deceased wandering around in search of some peace, past doors and windows adorned with candles and spookily grinning pumpkins (though the Celts of yore used to carve turnips – pumpkins are way easier!).

And there’s plenty to see and do in and around town before or after this eerie evening. Look for the gates and other remnants of the medieval wall which once surrounded the town. Check out the modest but interesting Museo Mares de Cedeira, organised around various of aspects of the sea which is so important to local life. And most especially venture out of town to explore the coast a bit? For example, the path from San Antón de Corveiro to San Andrés de Teixido runs along some of Galicia’s most vertiginous cliffs, with waves thundering against the rocks far below, cawing gulls wheeling far above, and the impressive blue Bay of Biscay stretching off into the horizon.

(By the way, other good spots in Galicia to be part of the fun include A Coruña itself; Ferrol, on the coast not far north of Coruña; Vigo, also on the coast way south of Coruña; and the town of Ribadavia, inland near the city of Ourense.)

And finally, another interesting - and actually key - fact about Samhain? It was brought to the USA by Irish immigrants, where it eventually evolved into Halloween. The old saying “what goes around comes around” comes to mind.

So if you’re interested in getting a glimpse of what Halloween’s ancestor was like, book a flight to A Coruña next October and check out Galicia's spooky doings. Happy Halloween/Samhain!