Why the Town of Bhuj, in Western India's Gujarat State, Is Beautiful & Unique Rustic, rugged and remarkable - three words that best describe Bhuj, in the interior of Gujarat off the Gulf of Kutchh, in the district of Kutchh. Founded as a town in 1510, it's home to remnants of the Harappan civilization and traces of influence from the Naga chiefs, Jadeja Rajputs, the Gujarat Sultans and the East India Company - all of which makes it a religious and historic destination especially for domestic travelers.

It is said that this area was ruled by the Naga chieftains long before the invasion of the Rajputs or the Mughals. By the mid-1500s, it became dominated by the Mughal rulers, followed by the Rajputs in the 1700s. By early 1800s Bhuj was brought under British rule, and post-independence, Kutchh was considered part of Bombay state. By 1960, the state was divided on a linguistic basis and wherein Kutch became part of Gujarat, which is the still the case today. 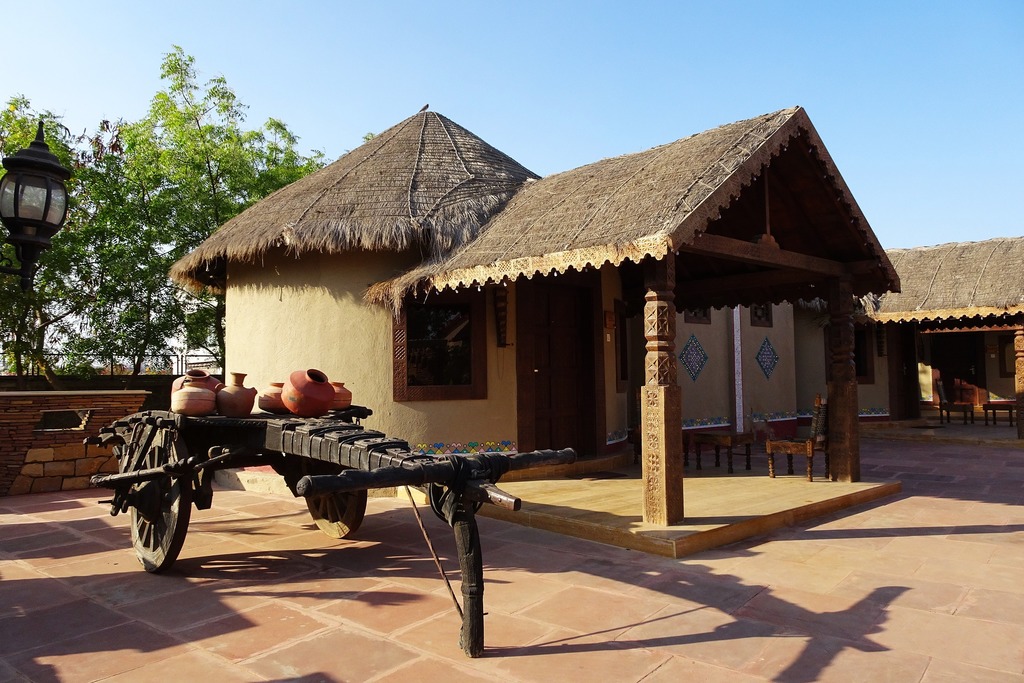 The ancient city is known for its historic architecture and palaces, and is popular with history buffs and archeologists. Most of the old architecture suffered severe damage in a 2001 earthquake which shook the region from its core, but what remains today, still holds the town’s rich heritage that will fascinate you the moment you arrive. Here are a few must-visits:

You are sure to stand in awe at the magnificence of this formidable 19th-century structure, which is a museum today. Its fine Italian Gothic architecture is enhanced by intricate marble and sandstone work, with features including a 45-foot clock tower, a courtyard temple, and huge Gothic style windows, surrounded by Corinthian pillars. Built by Colonel Henry Wilkins under the patronage of King Rao Pragmalji II, the Prag Mahal took 14 years to be completed with the help and collaboration of Italian and local Kutchhi artisans of its time.

Best translated as the ‘Hall of Mirrors’, this grand palace of the flamboyant Lakhpatji displays the fine artistry of the mid-19th century. The Aaina Mahal is perched on the banks of the Hamirsar Lake, which you can easily reach from any corner of the town, on foot. Emblazoned by mirror-work, semi-precious stones and antique chandeliers, the windows, balconies and carved doorways of this palace will leave you spellbound. The palace also has an in-house museum preserving and displaying handicrafts from different parts of Kutchh region. Built in 1822, Bhuj is the proud host of one of the first Swaminarayan Sampraday temples. Sitting along the far side of the Hamirsar Lake, the temple boats a huge marble dome, which was built after the 2001 earthquake left parts of the temple in ruins.

For outdoor and adventure lovers, these crystalline salt flats are the highlight of Bhuj. Spreading across approximately 7,500 square kilometers, this natural sanctuary boasts to be one of the largest saline wetland areas of India. Every winter the park is swarmed by flamingoes, black-necked storks, and the Indian cormorants, who feed on the aquatic life. If you’d like to explore the sanctuary and spend some time birdwatching, we recommend booking Bhuj cabs that will help you get around easily. Thronged by travelers, photographers and bird-watchers from all over India and abroad, Kutchh wildlife is an experience you cannot miss.

Bhuj is well connected to major cities of Gujarat like Ahmedabad, Surat, Vadodara etc. and other major metros of India. You can either take a flight to any of these prominent airports or take any of the six express trains that stop directly at Bhuj. You can also book Ahmedabad to Bhuj cabs if you’d like to make a road trip out of it. The best time to visit this heritage locale of Gujarat is between the months of November to January, when the weather is cooler and more pleasant than the sultry summer months.