Driving Across Libya, from Tripoli to Benghazi 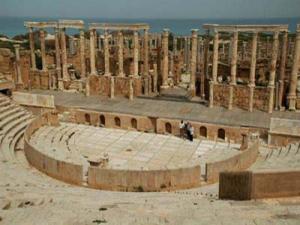 My trip to Libya included visiting the incredible Roman ruins at Leptis Magna (pictured here), and visiting with troops at Wheelus U. S. Air Force base and the small U. S. Coast Guard on the shores of Tripoli, and the World War Two cemetery at Tobruk.  Yes, there were American boots on the ground in Libya before Qaddafi, or Gadhafi, or however it's spelled in the English transliteration of his Arabic name.

I had quit my job as a news writer for Associated Press in New York to embark on the 'grand tour' that I didn't do straight out of college.  There were four of us, in a beat up Volkswagen micro-bus, were driving east across North Africa, from Morocco towards our goal of Egypt and the Pyramids, Valley of the Kings and Abu Simbel. Libya simply was a long stretch of road we were travelling through to get to Cairo.  We had joined up in Germany, where we bought the car, which rode the ferry with us from Gibraltar to Ceuta, in what was then Spanish Morocco.

We were the first Americans anybody had met, especially in small villages where we stopped for food or gas, and welcomed with smiles and the words “Kennedy”, or “Marlboro”, the only American words they knew.  It was instant celebrity.

Often, we camped out on beautiful, desolate beaches.  One morning, we woke to the sound of bleating goats, watched over by two boys, who offered us eggs and fresh yogurt.  We gave them some pencils in trade, and then shared tea, once our little gas camp stove got the water hot enough. 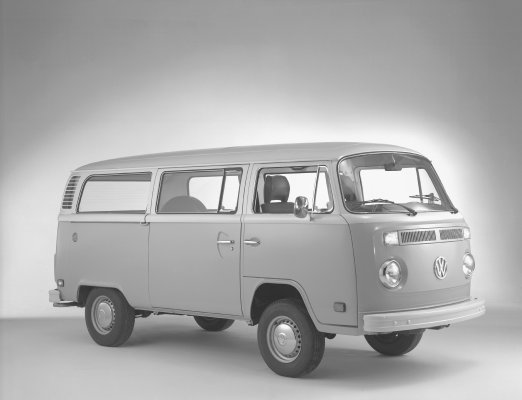 VW Microbus, like the one I drove across Libya, from Morocco to Algeria, Tunisia and Egypt

Sleeping on the beach in Tripoli -- The beach just outside Tripoli also was beautiful and desolate.  But, here, we were awoken in the middle of the night by soldiers on horseback, waving rifles in our faces.  They didn’t speak English; we didn’t speak Arabic, but their actions and intent were clear. They started going through our things, grabbing stuff, including my portable manual typewriter, probably the single most valuable item in the van, which I used to keep a travel diary and send them home periodically by regular mail.  We tugged back, yelling.  Eventually, they left.  We were shaken enough to pack up and drive away immediately, before dawn.

Wheelus U. S. Air Force Base, Tripoli -- Our VW was pretty recognizable, so we decided to keep driving east out of Libya. But our plans changed when we saw the entrance to Wheelus U.S. Air Force base, just east of Tripoli.  Americans have had ‘boots on the ground’ in Libya for nearly 200 years -- until 1969, when Qaddafi took power and kicked out American and NATO forces and turned Wheelus into a domestic airport re-named Methega.

Marine Corps Hymm -- The Marine Corps Hymn starts with “From the halls of Montezuma to the shores of Tripoli, we will fight our nation’s battles on the land and on the sea.”  That refers to a mostly forgotten – except by historians and the Marines -- U. S. war early in the 1800s against pirates along the Barbery Coast of what is now Morocco, Algeria, Tunisia and Libya.

Wheelus played an important role in the Cold War, as a base for the U.S. Strategic Air Command (SAC), and then as a training ground for NATO forces.  The base was built originally by Italy in the 1920s, after it invaded and conquered Libya as a colony.  It was captured by the British Army in WWII and became an American installation in 1945.  There also was a U.S. Coast Guard Base a few miles east of Wheelus.

World War Two cemetery at Tobruk -- Thousands of Allied soldiers from many lands buried at Tobruk, a few miles west of the Libyan border with Egypt.  It was the site of a decisive World War II siege and battle against the Afrika Corps, German and Italian forces under Lt. General Rommel.  There’s an even larger World War II cemetery at El Alamein, a few miles east of Libya’s border with Egypt. The white marble gravestones shine in the sunlight against the drab, flat, beige desert landscape, silent sentinels to the lunacy of two other dictators, Hitler and Mussolini.

Security was different when I was in Libya, and the Wheelus gates swung open for us four hungry and dusty Americans who just showed up, literally in the middle of nowhere. Hot showers! Apple pie with ice cream! Washing machines!  And friendly conversation about home.  I even saw the entire Libyan Air Force, then based at Wheelus.  It was two vintage planes the Americans were teaching the Libyans to fly.

Tourism to Libya -- Tourism to Libya has been growing the last few years, with cruise lines adding Tripoli and Benghazi to Mediterranean itineraries, and land operators offering tours around themes of history and culture. Tourism is a peaceful and productive way to stabilize and grow an economy, because it creates local jobs, from staffing hotels and souvenir shops to driving tour busses, to supporting local farmers who feed everybody.  So, it is a shame that one of the major victims of this victory against tyranny is international tourism.

I decided recently that I wanted to return to Libya and revisit the fabulous Roman ruins at Leptis Magna and Sabratha, and the ancient Greek cities of Cyrene and Apollonia, the cemeteries of soldiers from many lands at Tobruk, and by my presence show that Americans are still good guys.  And to take photos, since the album of black and white photos of my drive across Libya has disappeared.

I concur with Northwest News. Yes, the good old days.

Comment by Northeast News on September 7, 2011 at 11:12am
This article reminds me of the old days, when the phrase "intrepid traveler" still meant something. Travel was more about adventure and less about the vintage of wine you'd have at dinner.