We were celebrating a friend's Big Birthday - one of those extremely round number birthdays - at a swell hotel in Greenwich Village, so what could possibly go wrong? Just one little thing, as you'll see.
The Walker Hotel, at 52 West 13th Street, is one of several Greenwich Village lodgings that mixes some of the olde New York, Victorian spirit of literary giants like Henry James and more modern Village people such as Bob Dylan. Like the Marlton Hotel on 8th Street and the Washington Square Hotel, it represents the unlikely but successful marriage of traditional comforts with a 21st-century hip flair. Moreover, Society Café, its flagship restaurant, fits right in. 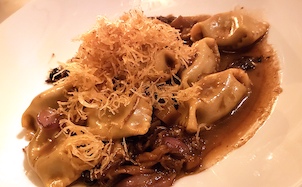 My favorite entrées? One was a pasta dish, the short rib agnolotti (left, ($30). A Piedmont region variation on ravioli, are served al dente with tender meat from short ribs, beech mushrooms, creamy cheese curds, a little Yukon potato or two, and pearl onions, is a heavenly combination. Another standout was the braised Colorado lamb loin (below, $33), served pink and moist with salty cucumber yogurt, patty pan squash, meaty fairytale eggplant, and pistachio salsa verde. The servers were professional yet casual, and the desserts include a Lady Ashton chocolate cake that is so chocolatey, the real Lady Ashton never tasted anything this good. 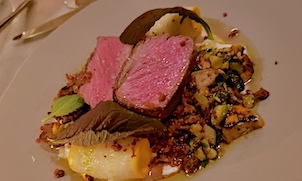 Tripping on Montepulciano
Ah, but I started this review by asking what could go wrong. Just one short but somewhat irritating thing: The least expensive red on the wine list is a so-so Montepulciano that costs $12 in stores. but instead of doubling or (sigh) tripling the retail price, Society Cafe quadruples it, charging $50. Add tax and tip, and you're paying about $65 for that Montepulciano.
In other words, this is a restaurant that gives you your money's worth in ambience, service, and cuisine, but not necessarily in wine. Is that a deal breaker? Not necessarily, because the prices on everything else were fair, and, as mentioned, the quality of the room, service, and food was excellent. However, there's a lesson here for visitors from places other than, say, the New York Metropolitan Area or San Francisco: Rents in cities like this are sky-high, so restaurants must find some way to survive in spite of that. Often, the solution is fairly priced menu items and eyebrow-raising charges for wine and spirits. It all works out in the end, but not before you - or I - have to reset those raised eyebrows.