The doctor nodded his head without challenging me in any way. When we checked in to the hotel, the first thing I did was to make sure that the toilet and shower were right next to each other. A mother just knows that these things will later turn out to be important.

Two days later, I emerged with my son (who was 20 lbs. lighter) emerged from the vomit-reeking, shit-splattered hotel room (I cleaned as best I could with only a terrycloth suggestion for a towel), to walk to a local cafe for tea and toast. We later hopped a ride with a 4x4 that was going our way. My son occasionally winced during the ride when his tender butt catapulted off the front seat as the vehicle jostled its way up the rutted dirt track. The vehicle dropped us as close as possible to the lodge and we hiked the remaining uphill distance. The guide put my son's arm over his shoulder to assist him to the lodge and I carried both our bags. It's one of those mom-lifts-a-car-off-her-kid kind of things. You find that inner strength when your child needs you. One backpack (about 40 lb each) on each shoulder, I ignored the urge to swoon and willed myself to keep moving one step at a time until I was there. The lodge was perched high in the green, lush mostly treeless Andes mountains. with a remarkable porch on the second floor.

There was only one tiny problem. My 6'8” son could not stand up straight anywhere on the second floor of the building! At 6' tall, I could barely stand up and had to duck through doorways. He looked like Gulliver bent over in a dollhouse. The kitchen, the porch, the sleeping quarters were all on the second floor. He was weak and needed to recover before we could start the two-day journey back to the States. So while the rest of us were traipsing through mud to get to nearby homes to build mud-brick stoves, the 19-year-old housekeeper brought hot tea to my son as he sat on the porch and stared at the Andes. Each day he ate a little more, gained back enough strength to carry his own bag, and we were able to return safely to the US. 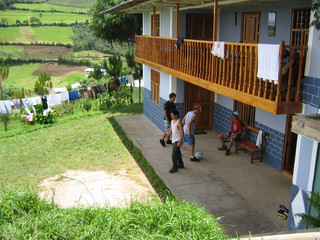 Every trip to South America thereafter has been with the same bag. My motionless traveling buddy is the only entity that has shared all my adventures.

My bag and I have been to Peru where we hiked the Inca Trail, although my bag was locked in hotel storage because it was too big for the hike. On another trip my bag was hauled by mule to a small Peruvian village so we could work on a service project, then was stowed in the underbelly of our bus where snow leaked in and covered everything as we crossed a 16,000-foot mountain pass. In Ecuador, it was stashed on the floor of our rustic lodge in Cotopaxi National Park, where tiger scorpions crawled. (I'll write another story about what happened when I walked around barefoot at night) Then on the flight to Galapagos, my bag was sprayed to rid it of invasive pests that could potentially infest the islands.

Most recently my bag was dragged up and down off the top of a jeep every day during an expedition in the Bolivian desert. And it has been comfortably carried on the backs of more guides and porters than I can remember and for whom I am glad I chose a backpack with adequate shoulder straps. It's the least I can do to ease the burden of those whose job it is to carry the loads of others.

It was in my hotel room in La Paz, after the jeep expedition, that I noticed the fraying. The fabric was worn through. I rustled through the special pocket that serves as my “kitchen junk drawer” when I travel, peeled off a few strips of duct tape and slapped it on. I repositioned and buried my volatile dirty underwear so that if there were an “equipment failure” and the contents of the bag escaped, at least my undies would not be blowing about an airport tarmac.

About two weeks after dropping the bag off for repair, I got a call from the local store telling me that Osprey had replaced my backpack for free (minus the shipping cost). Even the salesclerk was amazed. I was stunned. It was so sudden. And then the memories flooded back, and I remembered why I liked that bag. Not just because it had great wheels and comfortable shoulder straps. It was because that bag shared experiences that no one else knows. Just that bag and me. 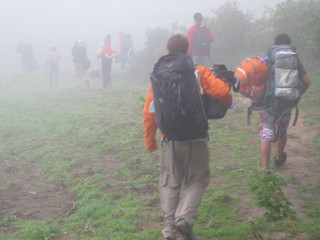