If you’re traveling in a wheelchair, getting around at your destination is a major concern. Yes, there are companies like Wheelchair Getaways that provide wheelchair accessible van rentals but they run around $100 a day, plus tax and mileage. Luckily, one option is becoming more common in increasing areas of the world…accessible public transportation.

Here in the U.S., the Americans with Disabilities Act (ADA) requires that new public transit be made accessible and older transit choices be adapted eventually. Around the world, accessible transit is also being expanded…I remember people telling me we’d have a very difficult time getting around Paris and then finding every bus I saw had wheelchair accessibility.

If you traveling to a city with a decent transit system, you can take advantage of it for a majority of your transportation needs. It will also be the lowest cost method, other than walking.

In general, the newer the transit system, the more accessible it will be. Los Angeles, Seattle, Washington D.C., and even Phoenix have 100% accessible systems while older metros like New York, Chicago, Boston, and London have some prominent gaps in their coverage.

On the west coast, there’s been a renaissance in rail transit…mostly light rail. San Diego started the new revolution with their bright red trolley cars, which use electric lifts to get wheelchairs up to the train level.

Newer systems saw an even better way, just build a ramp and platform up to the train level and wheelchair users can roll right on without any help from the staff. Ramps don’t break down, lifts do.

In San Francisco, platforms were built at several trolley stops but not the complete system. Platforms that lift from street level are used for the historic trolley cars that go along Market Street. The BART subway is completely accessible.

Taxis are hit and miss with accessibility, especially here in the United States. It’s difficult to find a wheelchair accessible van taxi when hailing a cab. Dispatchers can be indifferent to a wheelchair user’s needs and can leave you hanging, as happened with us recently in Seattle. One exception is London, where taxis are required to be wheelchair accessible.

New destinations are opening up to wheelchair users as additional systems come online. A taxi is no longer necessary from the airport in Seattle as the new light rail system will take you into downtown. Phoenix now

has a system to get around much of its sprawl. Denver, Portland, and Sacramento are three more cities which have opened up to chair users now that they have light rail systems. 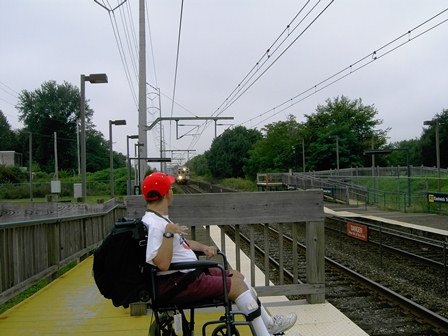 On the east coast, it’s still a good bet to use New York’s system. You’ll just need to research first to find which subway stations are accessible. The bus system is 100% accessible. Ditto for Chicago and Boston.

On the southern end of the Atlantic Seaboard, Miami and Atlanta have good barrier free systems. Charlotte
also has a new light rail system.

Many more systems are under construction. Look forward to adding destinations such as Milwaukee, Albuquerque, Kansas City, and even Honolulu.

In Europe, London boasts a vast network of underground and regional trains, many of which are accessible.

Maps of barrier free tube stations are available online and at each station. All but two bus lines are suitable for wheelchairs too. Those two lines are heritage routes that use the antique double-deckers but modern lines run parallel. By far, the most accessible city I’ve yet encountered is Munich whose U-Bahn and S-Bahn system is almost completely accessible. It would not be hard for a chair user to get anywhere they want to go in the metro area.

This is just a light sampling of what is available out there for wheelchair using travelers. Many more cities and regions are out there, waiting to be explored via their public transit systems. Most have that information on the web, just Google the city name and “transit” to find more.

You can also find a number of transit reports for various cities on our site, The World on Wheels.