Hampi where time seems to stand still in the ruins

Nestled in the northern region of Karnataka state, Hampi is a village of great historic importance. Its landscape is dominated by brilliant architectural and sculptural works. Hampi, a UNESCO World Heritage Site in India, is a must-visit place of palaces and temples, though most of which are in ruins today.

Hampi continues to be a big draw as a heritage travel site for those who are interested in the history, architecture and sculpture of ancient India. With the age-old cultural glory of India manifested through the unmatched magnificence of the dilapidated temples, palaces and other structures, Hampi seems to be a living history mystically resurrected from ruins and rubbles. Despite having ruins spread over most of the area, Hampi, the capital of the Vijaynagar Empire in the medieval period, never ceases to enchant its visitors. 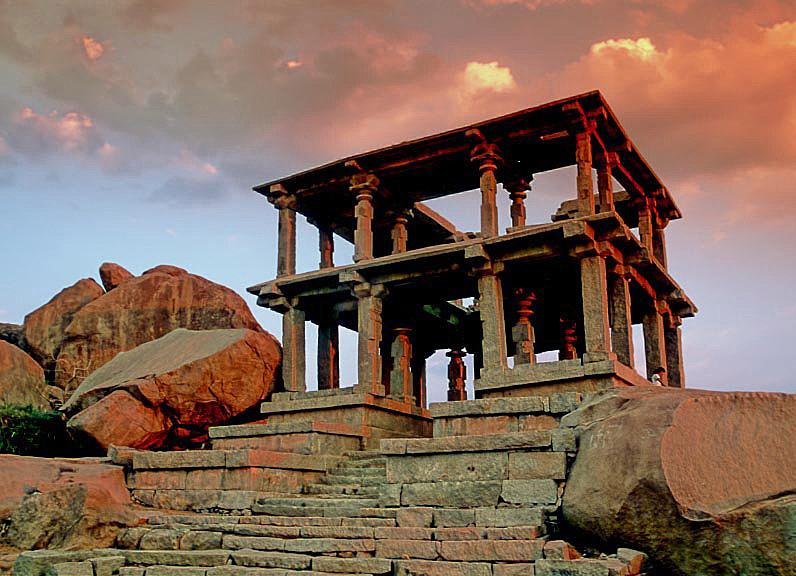 Seated on the banks of the River Tungabhadra and sprawling around 26km of area, Hampi is encircled by rough hilly terrains and massive bolder. The visitors to this village have an opportunity of whizzing back down the lane of history that dates back to the 3rd century BC, according to the references in the scriptures written during the regime of Ashoka.

Hampi shot to fame with the rise of the Vijaynagar rulers. It comprises towering main entrances, sprawling courtyards, delicately sculpted pillars and walls, open-pillared pavilions, exquisitely designed sanctums, and massive idols of deities. Most of these monuments were built during the Vijaynagar regime, while some of them are from the pre-Vijayanagar times. Indian Eagle takes you on an amazing tour of Hampi where each stone in the architecture of the Vijayanagar Empire is a symphony of marvel.

The places to see in Hampi

This 16-th century structure is the undisputed mainstay of Hampi. The temple is still in mint condition though some renovation works have been undertaken in recent times. It is famous for grandeur of structure, musical pillars and iconic stone chariot. The outside pillars produce an echoing sound when tapped.

The British wanted to know the mystery behind the musical pillars of the Vittala Temple and so, cut two of them. These pillars are now kept beyond the reach of the travelers to prevent further damage. The jaw-dropping highlight of the Vittala Temple is its showcase piece – a richly designed stone chariot standing in the courtyard of the temple. It is said that the chariot wheels were able to turn once upon a time.

It is just next to Virupaksha Temple and punctuated with many dolmens and temples. SasivekaluGanesha, a 12ft high massive structure of the elephant god, is the most fascinating monument on the hill. How to reach Hampi

Hampi is easily accessible from four airport cities of India – Mumbai, Bangalore, Hyderabad and Goa. Hubli, which is 143 km away, is the nearest airport to reach Hampi. Hospet Junction is the nearest railway station but visitors need to cross the Tungabhadra River from here. A road trip to Hampi from Bangalore is all the rage with young travellers. NRIs and American backpackers book cheap flights to India from USA online.

Every site in Hampi has its own beauty, charm and history full of enigma. Hampi is an ideal place to revisit the history of medieval India. Though most of the structures in Hampi are reduced to concrete ruins over the years, time seems to stand still before the unfading majesty and magnificence of the place that leave visitors spellbound.