Are you connected to the tourism/travel/hospitality industries or travel media in any way? If so, please specify how (kindly include any relevant company names/Web sites!).
I am an English speaking tour guide and Egyptology. I was born and raised in Luxor, Egypt and I am passionate about sharing my hometown with visitors.I work primarily in Luxor and Upper Egypt, but I also travel throughout Egypt. I believe that the best sites in Egypt are right here in Luxor, and love to share the history and culture of my country. I have worked for many international tour companies. I am a licensed tour guide and I enjoy working as a tour guide. I enjoy meeting new people but also it is excited for me to connect with Egyptian archeology and connect with civilization,show the real life in Egypt, and share others with my experience.I believe the tour guide isn't a recorder but an excellent tour Guide is like an actor - he sends a message through a way of creation.I can arrange tailor-made trips for groups or individuals based on your own interests and budget.I travel with my guests whenever possible.If another guide is necessary, I refer only to guides with similar credentials and excellent standards.
Website:http://dragonicum.com/page=DragonicumTourism_Luxor_Tourist_Guide_To...

On which destinations & travel topics can you advise members especially well?
Egypt

What destinations are you most interested in learning about?
Egypt

Ancient Egyptian society treated men and women equally. Women participated in the political, economic, and judicial world of ancient Egypt on the same terms as men. This social system reflects Egyptian mythology, where Goddesses played an equal, if not chief, role. The primeval mother-figures in the earliest prehistoric Egyptian myths are female. Female deities were kept separate from the males, with their own temples and followers. Egyptian goddesses are also creator deities, and the protectors of the pharaohs in the form of the cobra, vulture, or linoness.

In ancient Egyptian mythology, Egypt was created from the Watery Waste of Nun, a chaos god from whose body all things were born. The continuous mission of the daily temple services and strictly followed religious codes was to keep ordered Egyptian society from returning to the state of chaos in which it was born. Ma'at, the goddess in charge of law, balance and order, was one of the principal deities. The two "protectors of the realm" of Egypt were originally Nekhbet, vulture goddess of Northern Egypt, and Wadjet, cobra goddess of Lower Egypt. The cobra and the vulture were chosen by the Egyptians as the royal symbols because they were thought to be self-producing and therefore creators, or divine.

Egyptian mythology is a complex collection of often competing stories, traditions, and practices. This is partly because the culture is so ancient, and partly because each city had its own set of deities, whose unique personalities are lost as their cults age. Just as each city vied for supreme power before Egypt was a unified kingdom, the cities each tried to establish their gods as the supreme gods. Even after unification, each time the capital moved, the supreme god of the new city rose to be the supreme god of the kingdom.

Below, a table listing some of the many gods and goddesses of Egyptian mythology. The deities are listed as closely as possible to the order of their appearance in the myths, from oldest to newest.

Atum Heliopolis (ancient On) sun god, self-created from the Watery Waste of Nun

Osiris fertility god, later king of the dead, child of Geb and Nut

Isis Mistress of Magic and Speaker of Spells, also goddess of the dead, sister-wife of Osiris, child of Geb and Nut, mother of young Horus and therefore symbolic Mother of the Egyptian King

Nephthys one of the goddesses of the dead, sister-wife of Seth and child of Geb and Nut

Horus the Elder often shown in man's form, or as a hawk, child of Geb and Nut

Thoth Hermopolis god, moon god and reckoner of time, depicted in human form with an ibis mask Neith national goddess of Lower Egypt, huntress with crossed bow and arrows as her symbol, also goddess of the dead, sometimes supreme creator

Serkhet a goddess of death and burial

Re sun god, in the creation myth with Neith as supreme god, wept men and women from his eyes Ptah Memphis god, considered primeval being first created to take precendence over Atum Sekhmet represents the rays of the sun at midday, consort of Ptah and daughter of Re, the sun god, lion goddess of Middle Egypt

Satet and Anuket represent the Nile in flood, helpers to Khnum

Mut both lion and warrior goddess, consort of Amun at Thebes, replacing Amunet

Bastet cat goddess, important in the last 1000 years B, originally a lion goddess

Meretseger cobra goddess of the peak overlooking the Valley of the Kings, name means "she who loves silence"

Renenutet snake goddess and protector of the king and the harvest 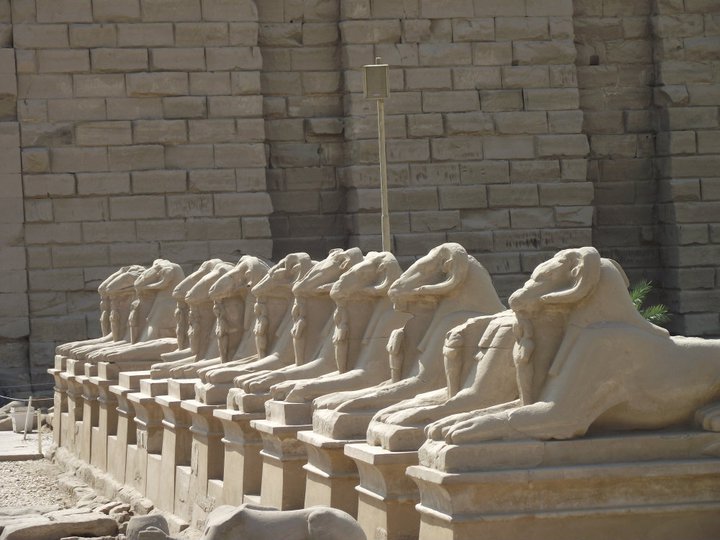 Visit both the east and west bank of Luxor. Starting in the Valley of the Kings. (3 tombs per ticket), we'll see Queen Hatshepsut's Temple and the Colossi of Memnon ,we drive back to the east bank to visit karnak and luxor temple
On your private tour you will be…

Luxor from a hot air balloon View the whole magnificent area of Luxor from a unique angle!

Get a birds eye view of Luxor and watch the early morning sun from your own hot air balloon.

Is It Safe for Tourists to Travel to Egypt Now?

Since medieval times, Egypt has always been a favorite destination for tourists from all over the world. The good weather, the many beaches of the Red Sea and the Mediterranean Sea, and the diversity of monuments that the land of the pharos hosts always attracted travelers from different regions to come and visit Egypt.

Where to Go in Luxor, Egypt

The city was regarded in the Ancient Egyptian texts as T-APT (meaning “the shrine”) and then, in a later period, the Greeks called it tea pie, which the Arabs later pronounced as Thebes. The importance of the city started as early as the 11th Dynasty by King Mento-hotep
The city of Thebes was the capital of the fourth Nome of Upper Egypt. The main local god was the God Amon Ra, who was worshipped with his wife, the Goddess Mutt, and their son, the God Khonsou, the God of the moon.…

Compare flight rates at  http://www.flightandroom.com/  and get the cheapest deals on Christmas and New Year..

Maralyn D Hill said…
Thank you for adding me as a connection. I look forward to your posts. I've been to Egypt, but not Luxor.

You can join our program from the link 'add your site' found on the front page of www.thetoptravelclub.com   we will create your listing and ask for your approval..cheers, tony

EnLinea Media said…
George, welcome to Tripatini, the worldwide travel community the New York Post dubbed “Facebook for travelers.” On Tripatini, you can mingle with travelers and top travel experts alike, so everybody learns how to travel better and smarter. A few tips to get you rolling:

• INTRODUCE YOURSELF by sharing your story, links, photos, videos, anything at all on the Text Box on your profile.