10 Dishes You Must Sample When Visiting Hanoi

Hanoi cuisine is one of the most special local aspects of Vietnam's capital which draws tourists from all over the world. In addition to pho - the most well-known dish, there are lots of others, from fancy to popular, which shouldn’t be missed. All of them help to build up a beloved image of Hanoi capital thousand years of civilization. This article will introduce the most famous dishes of Hanoi and best places for you to enjoy them.

Whoever has ever lived in Hanoi, especially women, cannot forget the dish which has a sourish flavor of vinegar and a brittle flavor of snails, fried tofu, and raw vegetables. It’s not hard to make the dish, but finding a delicious bowl of bun oc is more of a challenge. 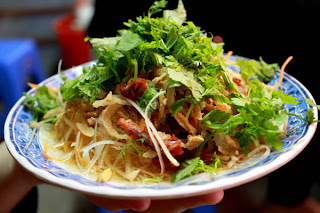 The main ingredients of this dish (above) are green papaya, dried beef, raw vegetables and sweet and sour sauce. It’s easy for you to find out restaurants serving this dish. However; if you want to enjoy the most delicious Nom Bo Kho, you should visit Nom Hue restaurant in Ham Long Street (across from Ham Long church) with various kinds of salad such as dried beef salad (Nom Bo Kho), mixed salad ( Nom Thap Cam), beef tendon salad (Nom Gan Bo), etc; or Long Vi On restaurant ( Ong Tau Ao Den restaurant) at No. 23 Ho Hoan Kiem street.
3. Nem Tai  Ba Hong ("Mrs. Hong," made from pigs' ears)
Nem tai is simply cleaned pork’s ears which are steamed and then sliced into thin pieces, mixed with powdered grilled rice. It is eaten with rice paper, fig leaves, salted fig, raw fresh vegetables and sweet and sour sauce. The dish has the crispy taste of pork’s ear, the buttery and strong taste of powdered grilled rice, the cool taste of herbs, and the sweet taste of the sauce. Visiting Hanoi, you should enjoy this dish at Nem Tai Ba Hong restaurant at 35 Hang Thung Street, Hoan Kiem district, Hanoi. 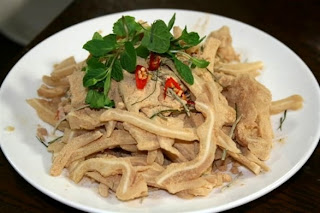 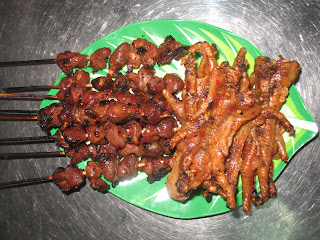 In Hanoi, Ly Van Phuc street is the famous place for Chan Ga Nuong. Chicken wings and legs are grilled and eaten with sweet potato, honey marinated bread, cucumber vinegar salad, chili sauce. The tasty dish should be enjoyed on Ly Van Phuc street, especially at the last restaurant on the street, say local gourmets.
5.      Oc Luoc (boiled snails)
In Hanoi, many Oc Luoc restaurants have the brand thank for its own unique sauce. Hanoi people often eat this dish wih chopped lemongrass and ginger, lemon leaves and sometimes with cucumber or jicama.  To enjoy these boiled snails, you can choose one of the restaurants located in Luong Dinh Cua street; at No 1 Dinh Liet; in Ham Long street (opposite to a church); Lan Binh restaurant at 18 Hang Be street or the one in Trai Gang market, etc.  The restaurants often open from afternoon to midnight. 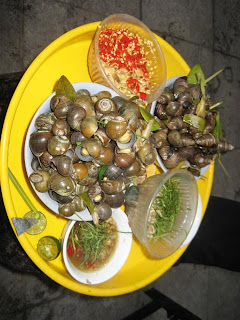 6.      Bun Cha (Noodles and Grilled Meat)
Bun Cha,  a dish originating in Hanoi, nowadays appears in many other provinces and cities of Vietnam. 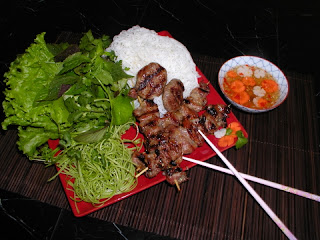 Bun cha is served with a plate of white rice noodle (bún), a steamy broth and herbs, a bowl of special sweet-and-sour sauce. Traditionally, chả (the pork) is a marinated pork patty, but another type of chả (small pieces of fatty pork belly) also often accompany the patties. However, bun cha in Hanoi is more special because it’s eaten with “hung” – the famous herb of Lang village of Hanoi. Visiting Hanoi, you should come No.34 Hang Than to enjoy this dish.
7.      Trang Tien Ice Cream 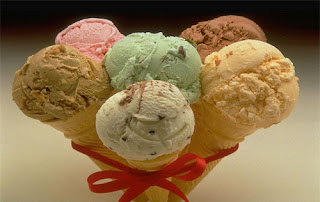 Established in Vietnam’s subsidy period, Trang Tien ice – cream shop is located at 35 Trang Tien street, nearly Hoan Kiem lake – the center of  Hanoi capital. Nowadays, it has become  a Hanoi fixture. Unlike many mass-produced ice creams, Trang Tien's has a fresh, sweet flavor. The shop is always crowded from morning to evening, even on winter days. This delicious ice cream is only VND 12.000 for ice cream cone and VND 8.000 for other kinds - a bargain!
8.      La Vong Fried Fish 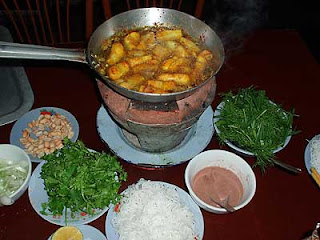 Cha ca la vong, one of  Hanoi's most famous dishes, is perfectly combined between Vietnamese spices such as saffron, dill, shrimp sauce, and fish sauce. Cha ca consists of pieces of attractive tasty fried fish eaten with red chili, white rice noodle, and some herbs. There are a lot of Cha Ca restaurants in Hanoi, however, the oldest one is Cha ca La Vong restaurant located at No.14 Cha Ca street.

If any visitor, especially a foreigner, is asked about his or her most memorable meal in Hanoi, the answer will likely be pho. Unlike dishes elsehwere in the country, Hanoi pho is not eaten with raw vegetables but its stock’s light sweetness will stimulate any diner's appetite. There are many famous pho restaurants here,  including Pho Co Cu on Lieu Giai Street; Pho Mau Dich on Ly Quoc Su Street; Pho Thin on Lo Duc Street; and Pho Suong in Dinh Liet Street, etc. 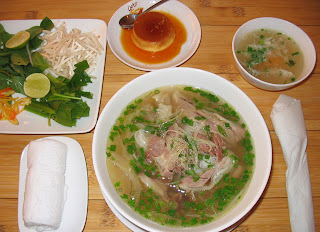 Not so typical of Hanoi per se, duck dishes do showcase the typical flavors of Vietnam’s north. The dishes are not only snacks for men to eat with sips of alcohol, but also suitable for families. Recently Kim Ma Street has become the center for a variety of duck-centered dining on dishes such as sautéed duck, sour bamboo duck hot pot, steamed duck with dracontomelon fruits, etc.

Cosiana Tour, it was my impression in Vietnam that the food is a little less sweet than Vietnamese food in the United States. Do you find that to be true?

Very happy because this post help you! Please follow us to get the updated information about travel in Vietnam & Indochina. Our beautiful country always welcome you!

Thanks for the introduction. You have given me some ideas for my next trip.