Greenwich Village Through the Centuries

16th Century: The site of Greenwich Village was inhabited by Native Americans during this time. The Village was merely a marshland named Sapokanican, used for camping and fishing.

17th and 18th Century: By the early 1600’s, Dutch settlers had cleared pastures and planted crops in this area, which they called Noortwyck. After the English conquest of New Amsterdam in 1664, the settlement became a country hamlet, first referred to Grin’wich in 1713 Common Council records. Greenwich Village survived the American Revolution as a pastoral suburb and in the 1780s the city bought a parcel of eight acres for use as a potter’s field and public gallows, at what is now Washington Square Park.

19th Century: Outbreaks of yellow fever and cholera caused flocks of people to flee north which contributed to a time 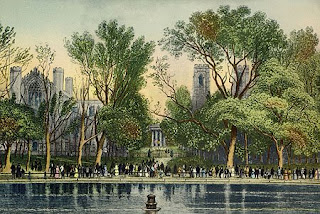 of seclusion of the area. From 1820 a more affluent residential development emerged to the east near Broadway and Washington Square Park, at the foot of Fifth Avenue.

Religious denominations commissioned buildings with elaborate decorative schemes, New York University grew on the east side of Washington Square beginning in 1836, and the neighborhood soon became the site of art clubs, , literary salons, fine hotels, and theaters. The character of the neighborhood changed markedly at the close of the century when German, Irish, and Italian immigrants found work in industries in the area.

20th Century: By the start of World War I it was widely known as a bohemian enclave with secluded side streets, low rents, and a tolerance for radicalism and nonconformity. Artists and writers received more attention for their innovative work and decrepit row houses were remodeled into “artistic flats.” The Village had become a center for the “beat movement” by the 1950s, with galleries, coffee houses, and street front theaters. During the 1960s a homosexual community formed around Christopher Street and was the site of the Stonewall Rebellion, regarded as the beginning of the movement for gay and lesbian rights. In the 1940s, urban renewal efforts on Washington Square South had altered the physical character of the neighborhood by demolishing many 19th century structures, but local resentment inspired a preservation movement.

Recent Years: The extension of the Greenwich Village Historic District and the creation of the Weehawken Street Historic District in 2006 were the results of the goal to preserve the waterfront. These recent landmarking victories were successful because of the Greenwich Village Society of Historic Preservation. The Society continues to work in close connection with the community to uphold the goals and protect the undesignated neighborhoods. Tourists and locals flock to the Village to live the history of the neighborhood and enjoy the artsy feel. Coffee shops, restaurants, and bars are always packed in this area mostly by a younger, hip crowd.

For more information, check out The Greenwich Village Society of Historic Preservation.