If you want to know what the best places are in a city, ask a native. Here's the list I recently gathered from a group of Milwaukeeans who love their city, the largest city of Wisconsin: the Milwaukee Art Museum (top); Pabst Brewery; Harley Davidson Museum; Skylight Opera Theater; Summerfest (world’s largest music festival); ethnic neighborhoods, the USA's fifth largest film festival; a park system throughout the city with Lake Michigan access; the Doors Open Milwaukee festival; the River West 24 Bike Ride; and glorious beer gardens complete with a firetruck that travels from spot to spot with beer kegs aboard.

It was with all this in mind that three of us travel writers ventured to this special city. One of us had lived for years in Milwaukee; we had often heard about the delicious brat sausages and cheese curds. I had even donned the infamous cheesehead worn by fans of the Green Bay Packers (actually based a few miles north), but we were on a trek to experience all that this Midwestern U.S. city has to offer. After arriving, we were graciously greeted and checked in by Aza at the Potawatomi Hotel & Casino, the first off-reservation casino and currently one of the largest tribally owned ones in the country. The casino is located in the heart of downtown Milwaukee and is Milwaukee’s most popular destination, with over six million visitors yearly. The hotel and casino is made up of 1.1 million square feet of space where guests can stay, dine, and see live performances in addition to gambling. We found our accommodations to be contemporary and beautifully decorated. Of course since we were staying at a casino, we made a late-night jaunt to the machines to try our luck.

Before dinner, we stopped at Taylor's Bar in the Third Ward, a place known as Milwaukee’s “Cheers” bar, to catch up with friends of our former Milwaukee travel buddy. That Midwest hospitality can be found throughout the city, but Taylor’s happy hour is a great way to start the evening. The Odd Duck Restaurant drew us in for dinner because of its fantastic reviews (and of course we loved the name!). The atmosphere and décor are casual and comfortable, with rich wood walls. The cocktail list is inviting and shows off the bartender’s ability as a true mixologist. We all loved No. 28, consisting of gin, St. Germain, green Chartreuse, sage, and fresh lemon. The wine list is also excellent, offering a wide range of choices from the United States, France, Spain, Italy, and South Africa.

We tried five small plates, and found all very creative, fresh, and delicious, displaying a variety of textures and flavors. Peruvian potato causa, consisting of poblano, caramelized onion, fried avocado, hardboiled egg and potato crisps, delighted us with its complexity. Another favorite was the smoked duck breast with mustard greens, duck confit ragu, sweet potato, and orange reduction. The other small plate is the spicy seafood hot pot made up of Dungeness crab, shrimp, mussels, cod, Thai chilis, Napa cabbage and daikon. On my next trip to Milwaukee, this restaurant will be at the top of my list.

We checked in for the next two days at the Kimpton Journeyman Hotel and its Tre Rivali Restaurant Please read about this new hotel in the Third Ward by clicking on the above link. This hotel is an excellent choice in Milwaukee.

Our next day started at the Milwaukee Art Museum (top), an architectural wonder not to be missed. As we arrived, we were awed by the stark white curves and arches reminiscent of waves or wings. The Quadracci Pavillion was designed by the Spanish starchitect Santiago Calatrava and was his first design built in the United States, in 2001. Besides its curves and arches, a highlight is the Burke Brise Soleil, a moveable sunscreen with a 217-foot wingspan that folds and unfolds to cover and protect the 90-foot-high glass ceiling several times a day. Make sure to be there when this folding takes place; it is breathtaking. Inside we found paintings, sculptures, and glasswork by well-known artists from America and Europe such as Renoir, Bonnard, Homer, and Chihuly, as well as decorative art from the 1800s. The white arches provided the perfect backdrop for these beautiful pieces.

A quick stop at Kopp's Frozen Custard, a Milwaukee institution, was necessary after all we had heard about that creamy concoction. It more than lived up to its reputation, yum!

Until my trip to Milwaukee, I had no idea that this city is the headquarters for Harley Davidson. Whether you are a motorcycle fan or not, Harley Davidson is quintessential Americana, and I think anyone will find the Harley Davidson Museum fascinating. The history of this iconic company, founded in 1903, echoes much of America’s history, including motorcycles being used to deliver mail, ridden by women as dispatchers during World War II, cycles with every inch covered in chrome and rhinestones, Evil Knievel’s bike, and even Elvis Presley’s iconic red, black, and chrome motorcycle.

Back down to earth after all these high-flying motorcycles, it was time for a serene and sophisticated lunch at Barlotta's Lake Park Bistro and a chance to meet our host, Claire Hanan from Visit Milwaukee. Upscale French food with views of Lake Michigan and an interior invoking a lake house atmosphere whet our appetite for croque madame, French onion soup, escargots, and carrot cake topped with ice cream and a dried pineapple flower. Delicious!

Milwaukee is home to Pabst Brewing Company, and its founder, Captain Frederick Pabst. Pabst and his wife Maria built the Pabst Mansion in 1890 for $75,000. We had to explore this symbol of America’s Gilded Age. After the death of Captain Pabst, his descendants sold the mansion to the Roman Catholic archdiocese, which let it fall disrepair to the point where it was scheduled to be torn down. But in 1975 it was rescued and placed on the National Register of Historic Places. Both Pabst and his wife were accomplished art collectors, and much of their collection still remains in the home. The Pabst Mansion should definitely be on the list of places to see in Milwaukee. Of course we had to stop by the newly opened The Best Place, home to the new Pabst new Milwaukee brewery, 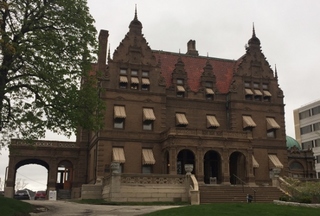 We had one more morning in town, and Theresa Nemetz of Milwaukee Food & City Tours offered us a small taste of what one of her company's many tours showcased of the city. Read what we experienced by clicking on the above link.

The last stop in Milwaukee was the Skylight Music Theatre - because we all need some culture in our life.  Broadway Theatre Center has been located in the Third Ward district since 1993. It rents space in the building to other arts organizations and offers set-building and other services to those organizations. One of Skylight's specialties has been the production of Gilbert and Sullivan operettas. You will also find baroque opera, operetta, musicals, and musical revues. The Cabot Theater seats 350 people and was designed after an intimate French theater. Founder Clair Richardson has ashes at the theater with a shot of whiskey sitting nearby.

Many, many thanks to our hosts Visit Milwaukee, the Kimpton Journeyman Hotel, and Potawatomi Hotel & Casino, which all helped us see some of the most exciting spots in town