Solar Eclipse in Uganda – One’s in a lifetime adventure!

On November the 3rd, 2013, a total solar eclipse will pass over equatorial Gabon in Western Africa Congo, Uganda, Kenya and finally Ethiopia

For the experienced eclipse chaser in these locations, such a narrow and abrupt eclipse will come with a prominent presentation of the colourful innermost atmospheric layer of the Sun (the chromospheres) and a spectacular view along the axis of the Moon’s shadow.

The total phase of a solar eclipse is very brief. It rarely lasts more than several minutes. Nevertheless, it is considered to be one of the most awe inspiring spectacles in all of nature which is worth traveling to go see. The sky takes on an eerie twilight as the Sun’s bright face is replaced by the black disk of the Moon. Surrounding the Moon is a beautiful gossamer halo. This is the Sun’s spectacular sola corona a super-heated plasma two million degrees in temperature. This Actual eclipse of November 3 is the total eclipse of the sun throughout the land. Under rare circumstances, a total eclipse can change to an annular eclipse or vice versa along different sections of the eclipse path. This happen when the curvature of Earth brings different points of the path into the umbra (total) and antumbral (annular) shadows, respectively. Hybrid eclipses are sometimes called annular/total eclipses. The last hybrid eclipse was in 2005 and the next one is in 2013 and will be witnessed in Africa starting from Gabon, Congo, Uganda, Kenya and finally Ethiopia.

There are not too many suitable (safe) locations in Africa to view this eclipse, which should, because of the short duration of totality have excellent displays of edge phenomena such as Bailey’s Beads, the chromospheres and diamond ring. Uganda is well prepared for this and has a great location close to Murchison’s National park, that provides an excellent basecamp at Paraa or Chobe lodge.

As the moon’s shadow tracks across the surface of the earth, the curvature of the globe causes the surface to rise up a little. This is enough to change the event into a total solar eclipse. As the curvature of the Earth drops away again, the event becomes an annular eclipse once more. Much of the eclipse path experiences the less desirable annular eclipse. The moon is barely able to eclipse the sun so the period of totality is often quite short. Still, it does have a period of totality which makes the hybrid solar eclipse one that is worth traveling to see. 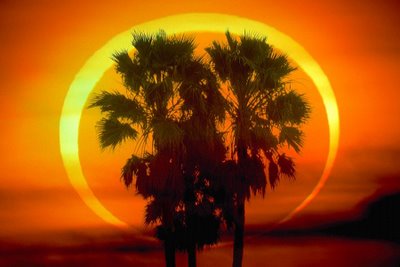 Contact Premier Safaris for more information and logistic support. They have an Eclipse group that you can join in Uganda. Accommodation will be at Paraa Safari lodge in the Murchison’s falls National Park