Miramar, Florida (Tripatini Newswire) Lowfare carrier Spirit Airlines, notable in recent years for pushing the envelope with its advertising as well as add-on fees such as the one imposed in 2010 for items stored in overhead bins,today again put itself in the forefront of the à-la-carte surcharges wave. CEO Ben Baldanza announced that as of September 1, Spirit will be instituting two additional fees, one built into the ticket price and another charged in-flight. 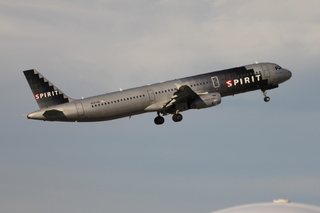 The in-flight charge will be $1 per visit to any onboard lavatory, payable by sliding a credit card to unlock the lavatory door. “Our customers have repeatedly told us that low fares are their highest priority when flying, and instituting this modest micro-charge will help us keep that fare structure in place going forward,” Baldanza said. “It’s a win-win.”

Furthermore, he pointed out that most Spirit passengers should be able to “hold it” during most flights, as the majority of the 21-year-old airline’s current 43 destinations are on routes shorter than six hours. However, as a result of consultation with the National Association for Continence and other elements of the American urinary establishment, Baldanza added, on the longest routes, such as Los Angeles to Fort Lauderdale (7 hours, 40 minutes), a credit for one lavatory visit per flight will be incorporated into ticket prices. Finally, as a backup in emergency situations, in addition to air-sickness bags, seat-back pouches will also be discreetly equipped with disposable plastic cups and catheters. Passengers with limited mobility will be able to purchase adult diapers for $5 each. “The NAC folks were especially jazzed about that one,” Baldanza commented.

While controversial, this is of course not the first time the concept of so-called “pay to pee” has arisen in the travel industry, Spirit is merely first out of the gate. The idea was first floated in 2009 by Michael O’Leary, CEO of Ireland-based lowfare pioneer Ryanair – one of the airlines on which Spirit has modeled its own business strategy. Baldanza said that he expected little long-term fallout from the measure.

“Pay to pee” is one thing, but “pay to breathe”? The second surcharge announced – also to be put into effect on May 1 – is a 45-cent-per-flight-hour ticket surcharge on in-flight ventilation. “Our passengers enjoy breathing, and since air recirculation and oxygenation has become a significant cost for us, they’ve told us they don’t mind a nominal fee to cover that, thereby helping us keep our fares as low as possible.”

The 45-cent figure applies only to oxygen circulated during the course of a normal flight; in an emergency, oxygen administered through drop-down masks will be charged at a discounted rate once surviving passengers have deplaned. And as a token of good will, next of kin of deceased passengers will have the charge waived. “After all," Baldanza noted, "Spirit is all about capitalism with a heart.”

Comment by Wendy Capra on April 1, 2011 at 6:45pm
Teehee ! Won't be long before the toiletpaper dispneser is coin-operated!!