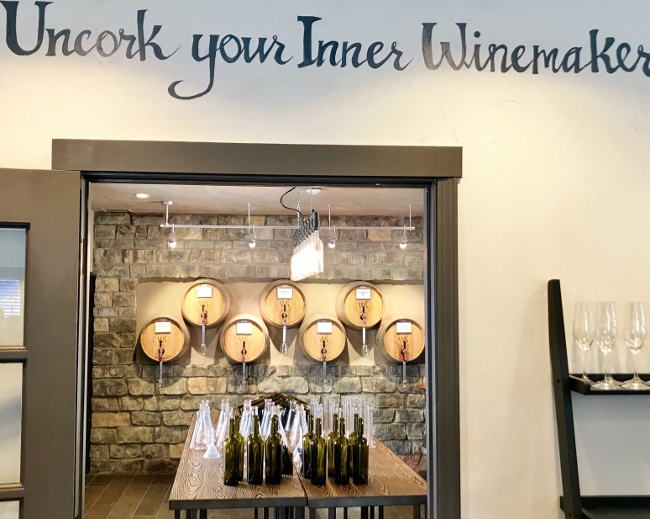 Sunshine you can count on, an Ice Cream Trail, a brew trail, historic Old Towns, and the oldest wine-growing region in the U.S. (surviving Prohibition)—these are some of the special treats awaiting visitors to the Northern California Tri-Valley area comprised of Livermore, Pleasanton, Dublin, and Danville, on the east edge of the San Francisco Bay area.

About 20 years ago our family was pondering a move to Livermore, California. That was back in the day before social media or much information existed about a region except from the Chamber of Commerce. All I knew is that it was in the East Bay of San Francisco and had good schools. This past November, while attending the Wine Bloggers Conference, I learned just how much this region has to offer when we were invited to explore Livermore Valley. Our day started with lunch at the famed Murrieta's Well, a relaxing oasis comprised of a rustic wood and rock winery set amid a park-like setting of grass, native plants, and roses. Murrieta’s Well was named for the artesian well where Joaquin Murrieta (the notorious Robin Hood of El Dorado) and his band of desperados purportedly watered their horses. It was first established in 1884 by Louis Mel. He built a gravity flow winery into the hillside and planted a vineyard of cuttings from famed Chateau d’Yquem and Chateau Margaux. In 1933, Ernest Wente purchased the winery and estate. As they say, the rest is history!

We were so fortunate to experience a thoughtfully prepared lunch and wine tasting amid the rustic beauty of the barrel room at Murrieta’s Well. Livermore is known for its high quality Bordeaux wines of Cabernet Sauvignon, Merlot, Petit Verdot, Cabernet Franc, and Malbec. Two of my favorites that I couldn’t leave the winery without purchasing were the Dry Rosé comprised of 55% Grenache and 45% Counoise; and The Spur, a true Bordeaux blend of 48% Cabernet Sauvignon, 20% Petite Sirah, 18% Merlot, 8% Petit Verdot, and 6% Cabernet Franc. If I could have, I would have purchased a bottle of each that we tried from the citrusy Sauvignon Blanc to the lush, rich Zarzuela (Tempranillo and Touriga.) The menu spoke to the California region with everything from a Black Bean Salad and Spicy Shrimp Tacos to Wild Mushroom Flatbread as well as Smoked Chicken Flatbread. Murrieta’s Well is a winery that is a “must” on any wine lover’s list. After lunch, a walk was in order, and we gathered at Ghielmetti Vineyards, a vineyard set on approximately 100 acres of rolling terrain situated on a sloped, alluvial bench providing panoramic views in all directions. With the debut release of “Lineage,” a brand comprised of a single wine made from the five classic Bordeaux varieties, Steven Kent Mirassou, a 6th generation winemaker for the Steven Kent Winery, welcomed us at the Ghielmetti Vineyards where they grow many of their grapes. Here they grow grapes to produce Bordeaux-style reds that rank among the New World’s greatest, most collectable wines.

This Bordeaux connection was brought about when pioneering Livermore winegrower Charles Wetmore visited Bordeaux and brought back cuttings from the Haut Médoc’s noble first growth, Chateau Margaux (with help from Wente’s original owner’s wife)– to propagate his own and neighboring Livermore Valley vineyards. You see, Wetmore knew that the climate and soils closely resemble those of Bordeaux’s famed Left Bank of the Gironde. At the 1889 Paris Exposition, two of three Gold Medal-awarded wines from America went to Livermore Valley properties, including Wetmore’s. It is not often that I am privy to tasting a wine over $100, but a sample of the Lineage Bordeaux blend was a testimony to the quality of the Lineage wine that Steven Kent Winery produces.

Another small, boutique winery that participated in our tasting at Ghielmetti Vineyards was McGrail Vineyards. In 2008, Jim and Ginger McGrail, along with their daughter, Heather, opened their estate tasting room and winery. Cabernet Sauvignon has been the highlight of their wine production where in the past it has won the prestigious San Francisco Chronicle Wine Competition. After our stroll through the vineyards and sampling of wines produced from the Ghielmetti Vineyards, we were off to one of the premiere wineries in Northern California, Concannon Vineyard.  Concannon is America’s oldest ongoing winery under the same family name. An estimated 80% of all California Cabernet Sauvignon grapes come from Concannon Clones. In addition to that, Jim Concannon carries the name “Father of Petite Sirah” by introducing America’s first Petite Sirah as a standalone varietal. You might say a lot of wine history came from this fine vineyard.

When we first arrived at Concannon Vineyard, we noticed the massive Ellen Rowe Concannon Victorian House built in 1885. John Concannon, 4th generation vintner, welcomed us and guided us along the path among the grape vines and olive trees. We were able to sample the lush Cabernet Sauvignon wine in front of the historic “Mother Clone” from which so much Cabernet originated in California.

The highlight of the evening was a tour through the Cask Room, a massive room full of 50-year-old French White Oak barrels and then dinner served in the Barrel Room amongst French and American oak barrels. This would be a most romantic setting for a very special celebration, and the dense chocolate truffle cake with a paired port ended our special evening. The following day we shared the very unique experience of blending wine at the Winemakers Studio at Wente Vineyards. Wente will be celebrating 135 years of winemaking next year from original cuttings brought from Europe in 1883. I have done wine blending in the past, but wine educator Kevin Gott helped us hone our tasting and evaluating skills of some amazing wines. After sampling three Cabernets and a couple of Malbecs to determine the body, acidity, and complexity of each, we were off with our very own beaker to fill with whatever blend seemed most promising to us from the seven barrels on the wall. Above the barrels were the aptly lettered words “Uncork your Inner Winemaker.” We all came up with three formulas. After swirling and sampling, we each arrived at our perfect blend. With a funnel, we poured our special blend into our bottle, corked it with a manual corking machine, and created our own unique label. What a great time we had sampling and evaluating to make our creation. 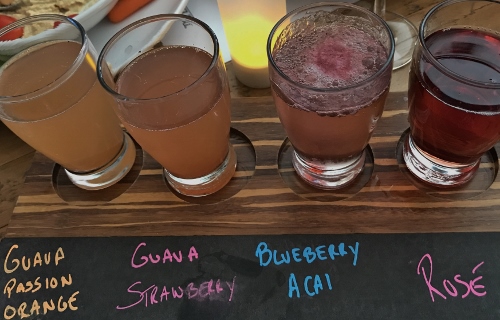 The last stop on our tour was Livermore Downtown with a creative lunch at the historic and quaint The Banks Vault, named “Best of The East Bay” in 2017 by Diablo Magazine. Joe Banks, owner, has turned an old bank vault into a cellar for local and global wines. Some of the taste treats we enjoyed were Baked Brie, Hummus, Bacon Wrapped Brussel Sprouts, and Stacked Poblano Eggs on a Boat. The Sparkling Mimosa Flight of the Week delighted all of us with mimosas of guava/passion/orange, guava/strawberry, blueberry/acai, and rosé.

A trip to the lush green countryside replete with our country’s oldest vineyards and Livermore Downtown should be on your list of places to explore in the coming months.

As is customary in the industry, my trip was sponsored by Livermore Valley Winegrowers Association.