Memphis, we were looking for what was happening in your restaurant scene, and we found it! Recently a fellow writer and myself were lucky enough to learn firsthand what the food vibe was like in this city.

Good restaurants abound in Memphis, and one of the finest is run by a pair of great chefs who have been nominated for the James Beard Best Chefs award, Andy Ticer and Michael Hudman. They opened Catherine & Mary's in a renovated apartment building downtown Memphis two years ago. These two bring Tuscan and Sicilian recipes straight from their grandmothers’ cooking which is how they decided on the name. In addition, there are some Southern and more creative variations on these recipes to delight diners. The menus change frequently based on what is available in the area. We found the food to be both delicious and elegant. We highly recommend  the Clamarata Pasta made of mushrooms, prosciutto, Calabrian chiles and gorgonzola. I enjoyed the Fish of the Day, which was an elegantly prepared piece of swordfish atop a cream sauce paired with a red sauce. A goat cheese cheesecake begged to be chosen as dessert, and we were not disappointed in this creamy delight topped with an apple strudel mixture.

Memphis is known for its barbecue, which makes it difficult to choose which one to try. We were given a list of three or four but settled on one dear to my travel writer’s heart where she has come with her family in past years, The Bar-B-Que Shop, “home of the dancing pigs” where we indulged in a slab of ribs and the special Bar-B-Q Spaghetti. This place hits the spot for authentic Bar-B-Q. 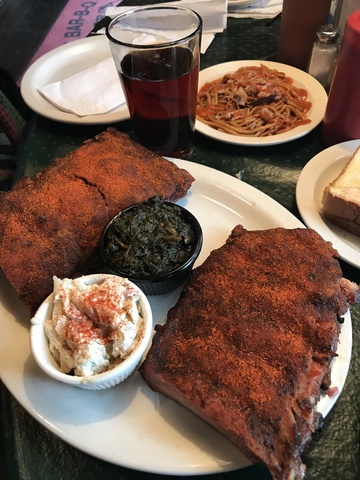 One of my favorites Memphis restaurants is The Liquor Store, a diner and bar in the trendy Broad Street Arts District. This creative restaurant is housed in a former liquor store and offers home cooked Southern as well as Latin food. The interior is playful and bright, and the choices of  menu items make it difficult to decide what to order. Every dish was perfectly prepared and the addition of a couple of tempting cocktails added to the fun of The Liquor Store.

Bounty on Broad sits a few doors down from The Liquor Store in the same Broad Avenue Arts District.  We found a casual fine dining restaurant with a focus on fresh, farm-to-table dishes for dinner. The atmosphere is refurbished to be comfortable with exposed bricks and wood. The menu abounds with lots of seafood like the perfectly prepared cornmeal crusted fried oysters and Bounty Bouillabaisse. On that night, the braised pork shank with smoked gouda grits and greens spoke to us. It was succulent and satisfying.  Not to be ignored was the cauliflower au gratin smothered with béchamel, white cheddar and crisp onions that we chose as a side dish. If you are looking for a special dinner, this place delivers.

For a new area that is just being developed, wander inside the Crosstown Concourse which used to be a Sears distribution center and has recently been renovated for apartments, offices, exercise facilities, and restaurants. Much of the space is not complete, but the interior of the building is architecturally interesting with a sound use of rehabbing a deserted space. We ate at Next Door, an American eatery, with the motto “real food sourced from American farmers.” This Colorado originated restaurant group boasts of knowing where their food comes from and that it is dedicated to environmentally-friendly practices like composting and wind power. They partner with The Kitchen Community, a non-profit organization that builds outdoor learning gardens for schools. This is the restaurant where you can specify your dietary needs, whether you want gluten free, dairy free, vegan, or vegetarian. And I must say that their 50/50 Burger of cremini mushrooms and beef patty with Swiss and balsamic onions was flavorful and expertly prepared.

I also urge you to head on over to the Beauty Shop restaurant, a refurbished beauty salon where aqua shampoo bowls from bygone days support the bar of the restaurant. You will also find some of the original overhead hair blow dryers mounted to the backs of seats where you can choose from an unusual selection of cocktails as well as Watermelon and Wings or Vegetarian Bahn Mi. We had to have the hushpuppies as an appetizer. Chef Kelly English, named the 2009 Food & Wine magazine “Best New Chef” opened Second Line, his second Memphis restaurant in 2013 located in Midtown. At Second Line we found a wide selection of New Orleans favorites like poboys, seafood plates, roasted meats, and unique cocktails. I had to try the Oyster PoBoy with a few shrimp added on top and the lightly breaded deep fried onion. Diets would have to wait until I got home! In case you wondered why this restaurant is called Second Line, the second line comes from New Orleans parades. The "main line" or "first line" is the main section of the parade and  the brass band. Those who follow the band just to enjoy the music are called the "second line.”

The Kitchen, another restaurant founded by Hugo Matheson and Kimbal Musk, also the founders of Next Door, base their food on the same principles of food sourced from America’s farmers. The Kitchen is located on the grounds of the sprawling and beautiful Shelby Park consisting of 4,500 acres and one of the largest urban parks in the country. The Kitchen displays an urban chic comfortable interior with a large outdoor patio where you can dine and watch the sunset. We were there for appetizers, and we found some savory ones. We were delighted with Deviled Eggs with smoked salmon, capers, shallots and dill as well as a wonderful starter of Roasted Sunchokes and Burrata smothered with hazelnut gremolata and parsley.

As you can see from the wide variety of restaurants we explored in just four days, Memphis is a culinary scene not to be overlooked.

While you are in Memphis trying out the wide variety of food offerings, I would recommend a stay at the Hotel Napoleon located in downtown Memphis. This small boutique hotel offers up-to-date rooms with luxurious bedding and a very friendly and accommodating staff.  The location  is close to just about anything you may want to see in the city.

As is customary in this industry, both my fellow writer and myself were hosted at most of these restaurants, but the delight I experienced in this fantastic city is evident in my writing.