The year 1819 was part of a turbulent time in Spanish history.. Just five years earlier, the country had thrown off its occupation by the empire of Napoleon Bonaparte but the Bourbon Dynasty's restored King Ferdinand VII had caused outrage by abrogating the liberal constitution in a bid to restore absolute monarchy (enough outrage, in fact, to lead to a military uprising at the start of 1820), and Spain's colonies in the Americas were fighting, with increasing success, for independence.

Yet against this backdrop, one of the world's great art museums managed to be founded. Its home on central Madrid's broad, leafy Paseo del Prado had been planned and nearly completed by 1808, when Napoleon invaded, and attempts by the puppet régime of his brother José Bonaparte, whom he placed on the throne, to finish and inaugurate the museum foundered due to its instability. But nine years later the time was finally right, and the former royal collection of Spanish and European art opened to public acclaim as the Royal Museum of Painting and Art, with the work of former court painter Francisco Goya being given pride of place, from portraits of Spain's royalty to some very dark later stuff indeed. And two centuries later, this great repository of culture is celebrating its history and superlative collection.

In addition to various symposia and other events throughout the year, the museum is marking the occasion with a series of special exhibitions, starting with "Museo del Prado 1819-2018: A Place of Memory", focussing on the dialogue between the museum and society; heritage policies in Spain; and the trends that have guided the growth of the collection, which beyond Goya includes most of Spain's illustrious artists up till the 20th century, such as Bartolomé Bermejo, El Greco, Esteban Murillo, José de Ribera, Joaquín Sorolla, Diego Velázquez (whose statue graces the museum's Paseo del Prado entrance, top, as Goya's graces the main entrance), and Francisco de Zurbarán, as well as other Europeans like Hieronymus Bosch, Caravaggio, Albrecht Dürer, Fra Angelico, Rembrandt van Rijn, Raphael, Peter Paul Rubens, Giovanni Battista Tiepolo, Titian, and Anthony van Dyck. 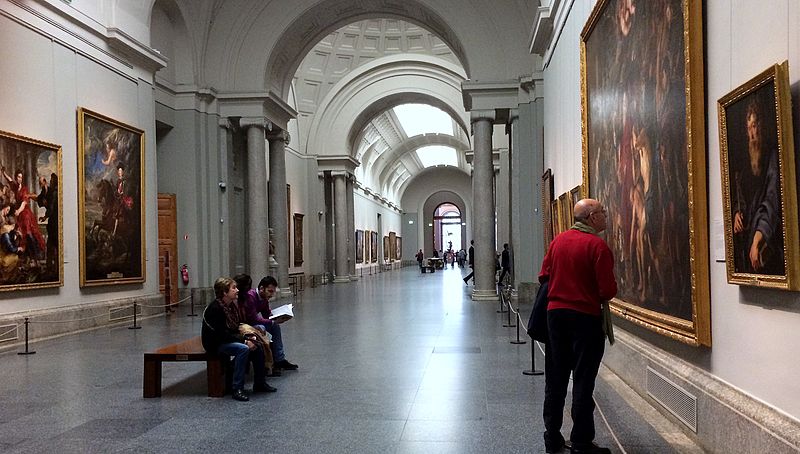 Other prominent exhibitions this year include a rare modern-art exhibition, focussing on Alberto Giacometti, 2 April through 7 July;  Fra Angelico and the Rise of the Italian Renaissance, 28 May through 15 September; Art and Myth: The Gods in the Prado, through 6 January; A Tale of Two Women Painters: Sofonisba Aguissola and Lavinia Fontana, through 2 February; and a new look at the drawings of Goya the Prado's collection and others around the world, from 19 November through 16 February.

All told, this is an especially exciting year to be visiting not only one of Madrid's greatest museums but one of Europe's and the world!